"Renaissance and Reformation" at LACMA 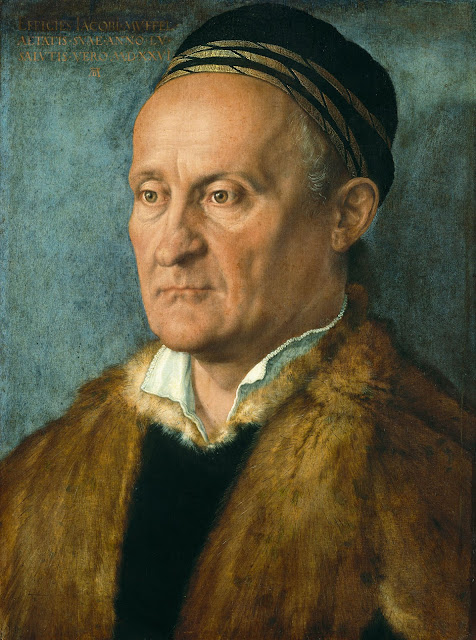 This fall and winter American museums are excavating the European canon, with shows on such relatively lesser-known figures as Valentin de Boulogne, the Della Robbias, the Le Nains, and Edmé Bouchardon. But the nation's most ambitious Old Master show is at LACMA. "Renaissance and Reformation: German Art in the Age of Dürer and Cranach" assembles a hundred-some works, not only by the subtitled worthies but also Tilman Riemenschneider, Hans Holbein, Hans Baldung Grien, and (armorer) Peter von Speyer the Elder.
At top is Albrecht Dürer's portrait of Jakob Muffel, 1526. It's one of three major Dürer paintings in the show, and that alone is reason to visit.
The show foregrounds the weirdness of German Renaissance art. While Dürer's naturalism drew on lofty Italian and Netherlandish traditions, many of his contemporaries took "realism" in delirious new directions. There was an fashion for battle or crowd scenes with each figure rendered in insane detail. Two examples are a Lucas Cranach the Elder The Crossing of the Red Sea (1530) and a 1533 The Siege of Alesia by Melchior Feselsen. Below are small details of both. In each case the horror vacui details are amazing; the whole picture is less successful. 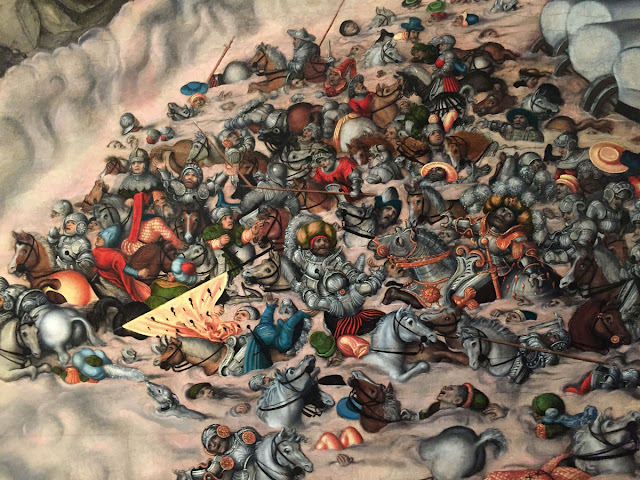 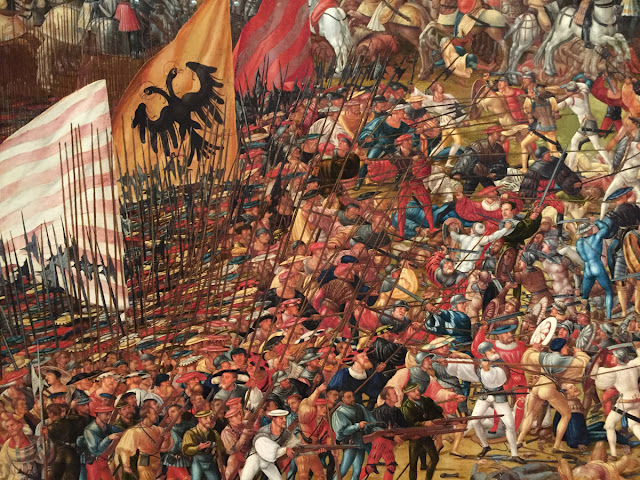 Dürer's prints were the most influential works of the German Renaissance. They get only a nod here; instead "Renaissance and Reformation" shows us something American audiences haven't seen before: the fake-news memes of the alt-Lutheran movement.
Melchior Lorch presents The Pope as Wild Man. The Wild Man was a German Bigfoot, and the Lutheran artist intended no compliment. The print was published the year that Martin Luther called the Pope the Antichrist. 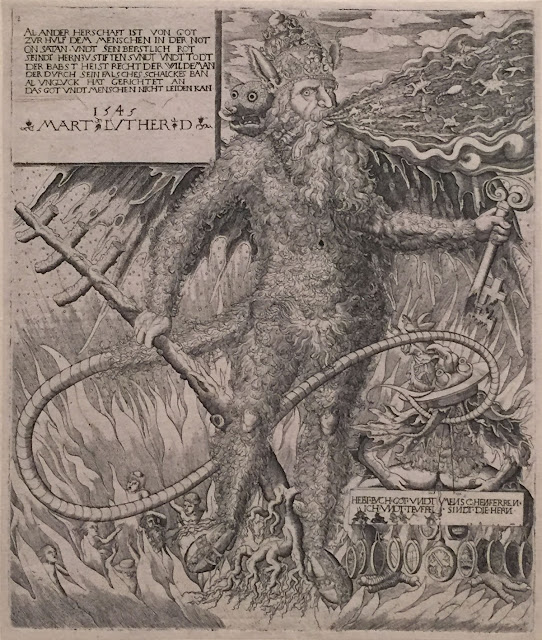 Matthais Gerung's woodcut Satire of Indulgences (before 1536) represents the Roman Church as a witchy monster. It sits on an indulgence letter, one foot in a mortar of holy water. Monks and nuns dine in the creature's mouth. 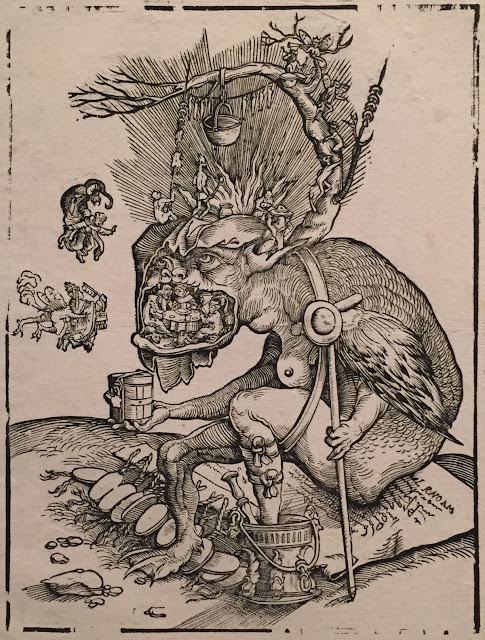 Prints were the Internet of the time. The most virulent images weren't necessarily by the art-historical big names, and thus this material has been little collected by American museums.
You'll see the name Cranach quite a bit, but note that there are two artists on view here: the famous Lucas Cranach the Elder, and his less famous son, Lucas Cranach the Younger. 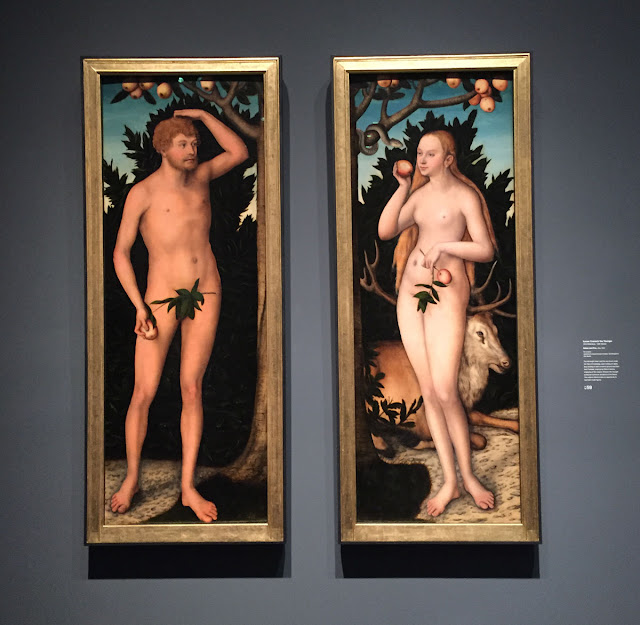 For instance, the show has paintings of Adam and Eve that resemble those at the Norton Simon Museum. But the paintings now at LACMA, lent by Dresden's Gemäldegalerie Alte Meister, are copies of dad's work by the son, with lighter backgrounds and different expressions. 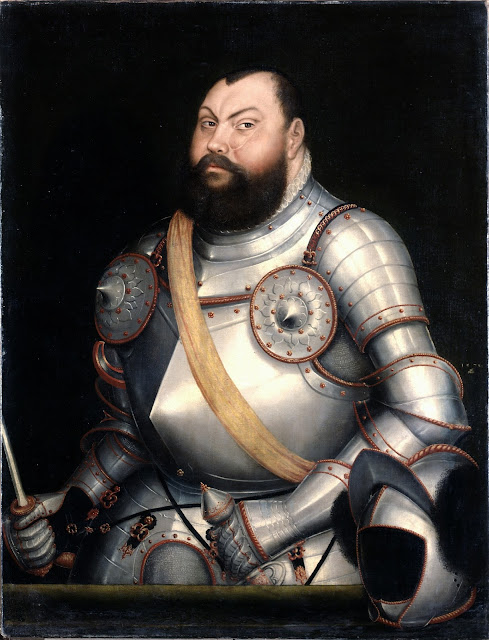 The show also has a pair of Cranach the Younger portraits, painted long after Elder's death, that are unforgettable in their own right. Shown is John Frederick the Magnanimous, Elector of Saxony, in armor (1578). The bullet-headed sitter has an interesting scar and verges on a caricature, a reading only enhanced by the armor's man-boob bosses. Both art history and the art market have regarded Cranach the Younger as a mere disambiguation. Maybe L.C. the Younger's original portraits are more interesting than we've thought?

Below: Hans Holbein's Double Portrait of Thomas Goldsalve and His Son (1528), Tilman Riemenschneider's Saint Matthew (1500-05), Peter von Speyer the Elder's Three-quarter Armor of Elector Augustus of Saxony (1546), Monogrammist JZ's Head of a Roebuck with Monstrous Antlers (c. 1570), and a jewel box attributed to the workshop of Wenzel Jamnitzer. 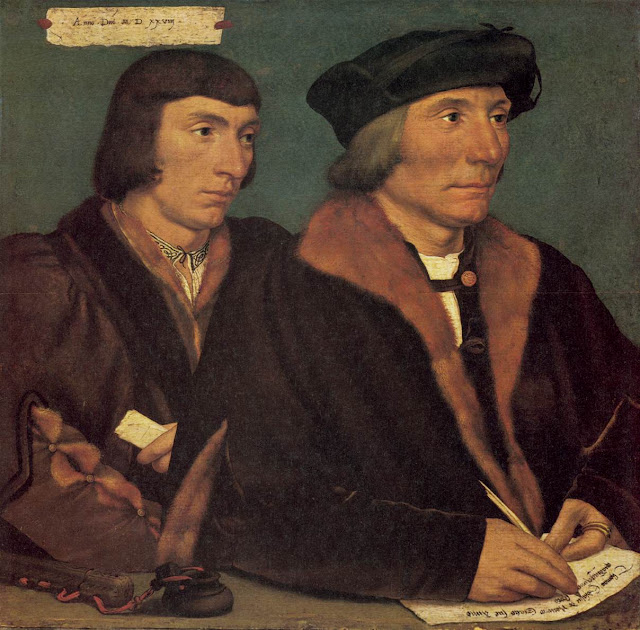 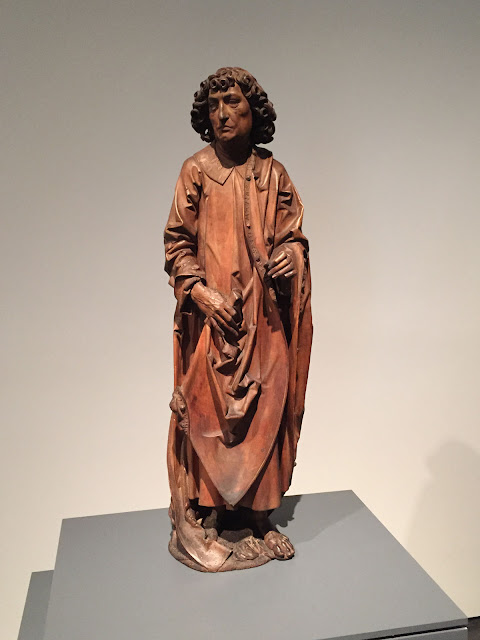 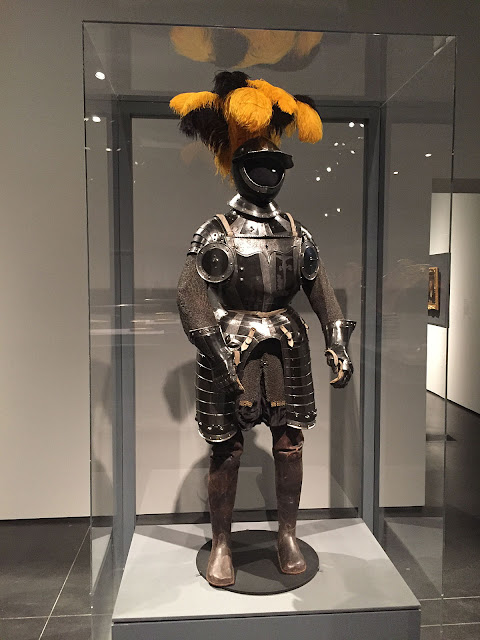 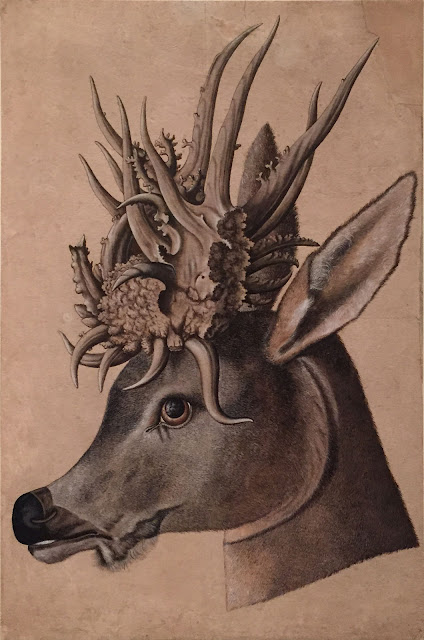 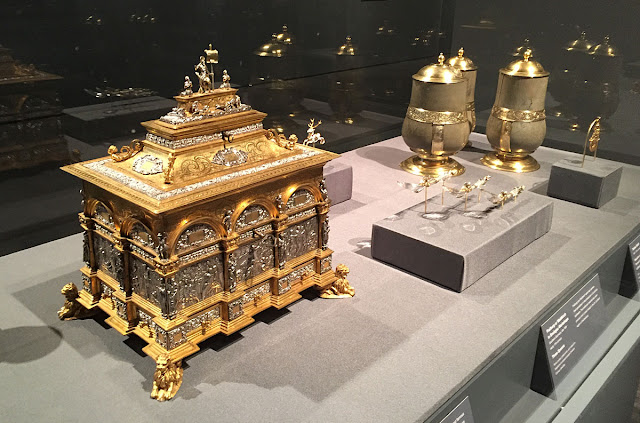 William Poundstone said…
Send your e-mail to lacmonfire@gmail.com
February 13, 2017 at 6:41 AM