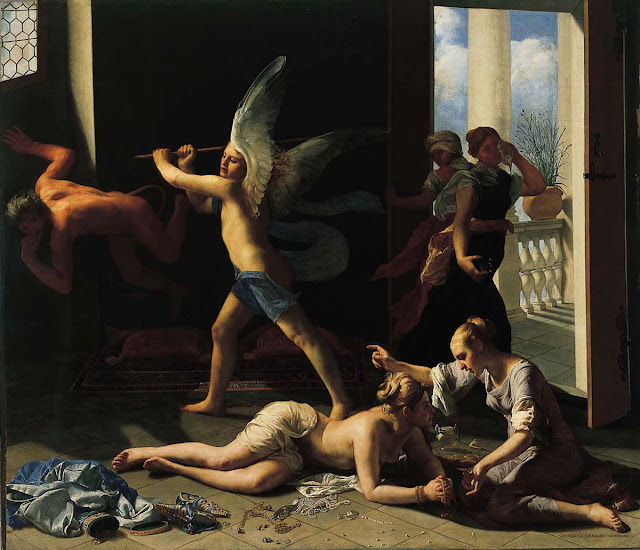 This fall two Italian paintings from the Norton Simon Museum are receiving focus show treatment, though neither in Pasadena. The Getty is featuring Giovanni di Paolo's Branchini Madonna (through Jan. 8, 2017). In New York, Guido Cagnacci's The Repentant Magdalene is now on loan to the Frick Collection (through Jan. 22, 2017); it travels to the National Gallery, London (Feb. 15–May 21, 2017). The transatlantic tour is accompanied by a book by Frick chief curator Xavier Salomon.
The Frick showing is a coup, given that consummate connoisseur Henry Clay Frick had no interest in the Italian Baroque, not even Caravaggio, and shied away from nudity and violence in art. The Simon painting has three life-size nudes, one a devil being beaten with a stick.
Norton Simon was arbitrageur as well as art lover. He believed the Italian Baroque to merit a buy signal. Simon was defeated in a bid to purchase Orazio Gentileschi's Danaë (coincidentally acquired by the Getty this year). Simon's greatest Italian Baroque purchase came in 1982, when he bought Cagnacci's The Repentant Magdalene (after 1660). It was first Cagnacci to enter an American museum, and one the last major paintings that Simon acquired.
Not much known is about Guido Cagnacci's life (1601-1663). He is described as an artist of doubtful morality who associated with cross-dressing models (women who dressed as men). Cagnacci worked mostly in Romagna. His works have a stark naturalism and sensuality that set them apart. Below is The Death of Cleopatra (1658) in Berlin. It's easy to understand why critics and collectors of Frick's time dismissed Cagnacci. Such works are cinematic, though other terms might be Hollywood or kitsch or slutty. It has been proposed that Cagnacci was influenced by theatrical productions of his subjects, as with The Polish Rider or certain de la Tours.
Cagnacci spent his last years in Vienna. The Repentant Magdalene was probably painted there, for Emperor Leopold I. It spent most of its history in the collections of the Gonzagas and the Duke of Portland. Simon bought it from Colnaghi, London.
Since then Cagnacci has seen a revival of interest. The Getty bought a David with the Head of Goliath (below left) in 2008, and earlier this year, the Metropolitan Museum added a relatively low-wattage version of the ever-popular Death of Cleopatra (right). 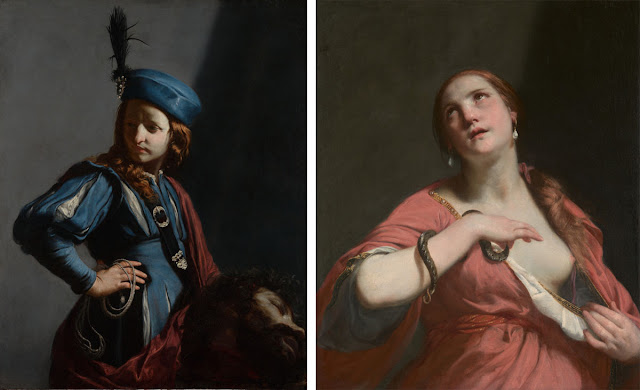 In 2012 Sotheby's sold a remarkable Reclining Male Nude for $1.14 million. Masterfully foreshortened and freely painted, it's been compared to Manet's Dead Toreador. 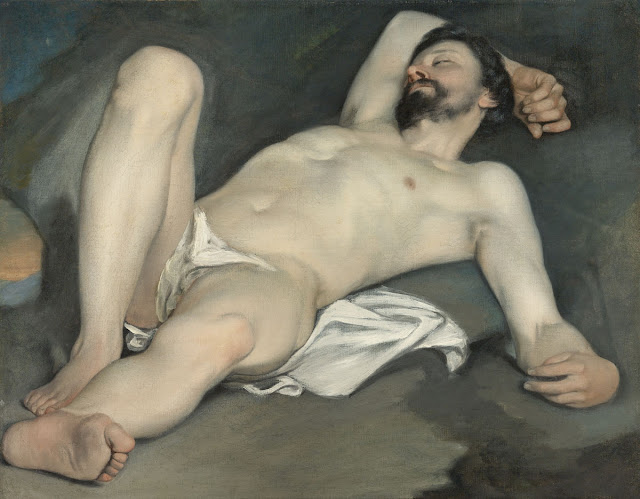 The Male Nude is probably an academic study of the 1630s, reflecting the influence of Guercino. Late in life, Cagnacci became known for hi-res detail. Check out the detail of Mary's jewelry in the Simon painting. Cagnacci's peers faulted him for being too realistic. 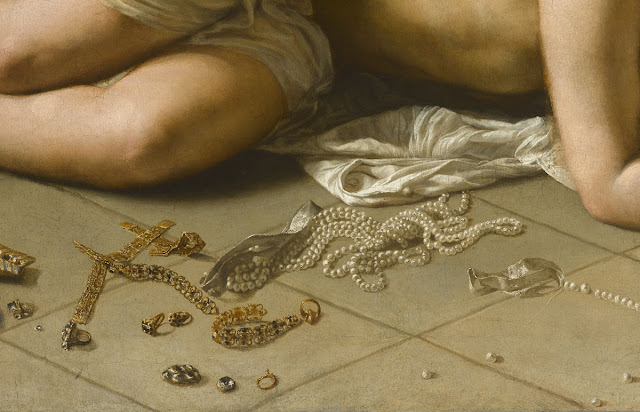 The black feather in the Getty painting is another amazing picture-in-picture. 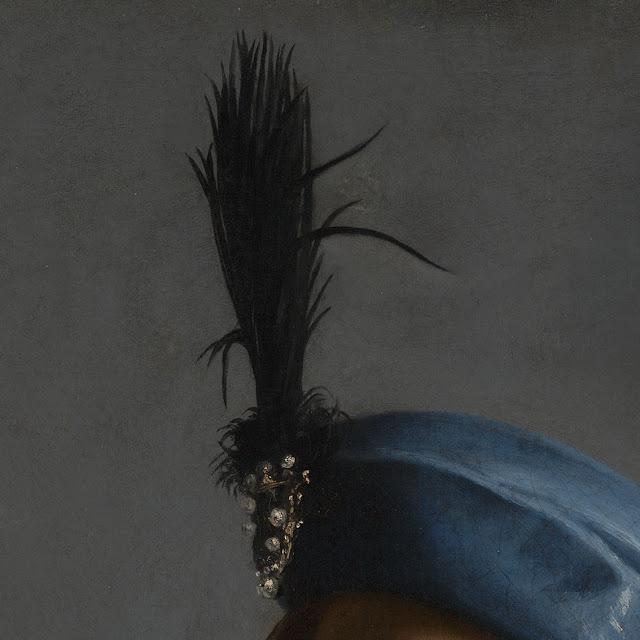 For his book on Cagnacci, Xavier Salomon managed to look at virtually every Cagnacci in Romagna in summer 2015. He notes that Cagnacci grew up and worked in Rimini, hometown of Federico Fellini. Wrote Salomon:
"In the evenings, after dinners by the sea I would return to my hotel, the same one that inspired scenes in Fellini’s movies, and watch his films, Amarcord and La Dolce Vita. Many of their erotically charged female characters made me think and look at Cagnacci in a different way. Did Fellini know Cagnacci’s paintings? Was Anita Ekberg’s character in La Dolce Vita a successor of Cagnacci’s Cleopatra? I like to imagine Fellini as one of the visitors to the 1959 exhibition in Bologna where Cagnacci’s Death of Cleopatra (c. 1660), now at the Pinacoteca di Brera, was first exhibited. The painting certainly inspired other intellectuals of the day…"