A Wild Flower in the Garden of Sienese Art 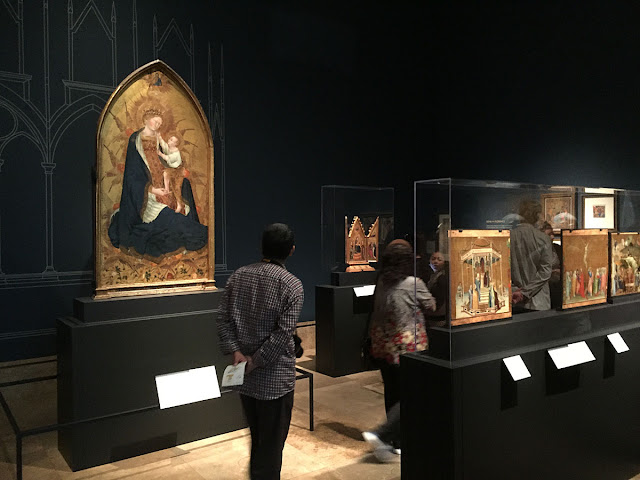 "Shimmer of Gold: Giovanni di Paolo in Renaissance Siena," a one-room exhibition at the Getty, marks a culmination of America's century-long fascination with the artist. Giovanni di Paolo was a Sienese painter in a Florentine century. He was not on art history's A-list. Perhaps for that reason European nations were relatively willing to cash in by permitting export of Giovanni paintings to acquisitive 20th-century Americans. Among the first U.S. collectors were Philip Lehman and John J. Johnson. Bernard Berenson reconstructed Giovanni's oeuvre, and by 1914 Joseph Breck could pen this florid description of the artist (for Art in America):

"Some one has rather aptly described Giovanni di Paolo as 'a wild flower in the garden of Sienese art.' At his best he has indeed the vernal fragrance, the simple loveliness of the road-side blossom. He never labors after beauty; never waters and tends the pretty flowering of his fancy. He achieves loveliness naively, with happy, spontaneous inspiration, or not at all. When he fails he loses himself in the rank vegetation of mannerisms."
(Giovanni's "pretty flowers" are on view at the bottom of the current show's centerpiece, the Branchini Madonna owned by the Norton Simon Museum.)
Perhaps Giovanni's greatest American coup was the Museum of Modern Art's 1936 "Fantastic Art, Dada, and Surrealism." The show that introduced Ernst, Duchamp, Dalí, and Giacometti to mainstream American audiences also introduced Giovanni di Paolo's St. Nicholas of Tolentino Saving a Shipwreck (1457, now at the Philadelphia Museum of Art). MoMA encouraged the reading of Giovanni as a Surrealist, or Magic Realist, before the fact.
And why not? St. Nicholas is a dream-like tableaux of a flying saint, cloud-like sails, eerie lighting, and a ruined ship presented as a stage set. Everything seems meaningful but nothing makes sense.
For a sense of American tastes at the time, consider one of the most discussed (and controversial) American paintings of the decade, Peter Blume's South of Scranton (1931). Blume was trying to confound the viewer, while Giovanni was illustrating stories well known to his audience. But that kind of distinction tended to get lost in the shuffle.
Billing Giovanni as a Surrealist was apparently good for the art trade. Then as now, wealthy Americans preferred their Old Masters with a contemporary twist. Giovanni altarpieces were sundered for quick sale. The small narrative panels seemed especially surreal out of context. One index of that is the fact that the Metropolitan Museum alone now has 21 Giovanni di Paolo paintings. The best-known must be The Creation of the World and the Expulsion from Paradise, an Old Testament subject complete with a target painting.

Los Angeles of course got a late start. Though Berenson advised J. Paul Getty, the latter never bought a Giovanni painting. LACMA's one Giovanni, an intact portable triptych that's in the show, is a 1996 gift. However, Norton Simon bought two Giovanni paintings, both excellent. The one now featured, the Branchini Madonna (1427), is the central panel of an early altarpiece commissioned for the Branchini Chapel in Siena's Church of San Domenico. It could be called the greatest Giovanni in America, but it's atypical of American taste, being big and glorious rather than small and weird.
The Simon Madonna exemplifies the grace of Gentile da Fabriano and the International Gothic Style. Gentile spent some time in Siena and died in 1427, the year of the Branchini Madonna. Text panels mention speculation that Gentile may have worked with Giovanni on the Simon painting. That's probably a long shot, but the exhibition makes a strong case that Giovanni knew of Gentile's techniques and adopted them.

"Shimmer of Gold" is a reunion show juxtaposing the Simon Madonna with smaller panels that have only recently been identified as part of the same altarpiece. Tracings on the gallery wall sketch a likely original configuration. There is no attempt to show the panels in their original configurations, for indeed most of the components remain AWOL. Shown at something like its original height, the Simon Madonna looks considerably more monumental than it does in Pasadena.
Sometimes the most magic realism is just paying attention to the world before your eyes. Along with Gentile, Giovanni was an early, though inconsistent adopter of painted shadows. Below is a small detail of  The Flight Into Egypt, a Branchini Altarpiece predella panel lent by Siena's Pinacoteca Nazionale.