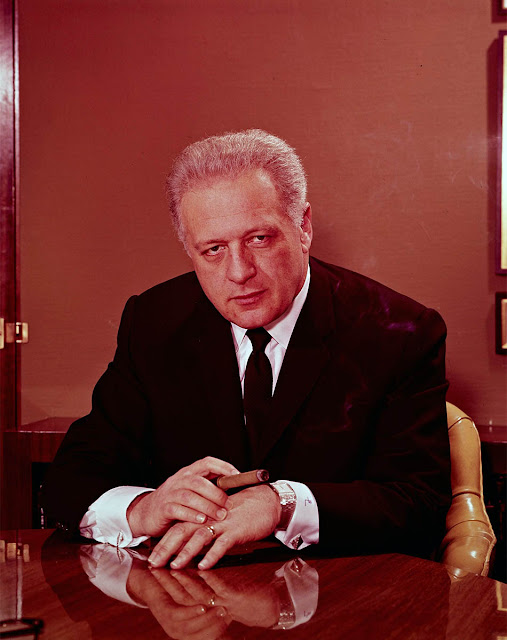 "The only -ism for me is narcissism," Bart Lytton told Time magazine in 1968. "I am the most successful businessman in this decade in the U.S.," he said, while admitting he was broke.
Lytton, one of the founders of LACMA, is in the news again. His Sunset Strip Lytton Savings, a savings-and-loan building by mid-century architect Kurt Meyer, has become the object of a preservation battle. Frank Gehry's 8150 Sunset project (below) would replace Meyer's structure, now a Chase Bank branch. The L.A. Conservancy is suing the city to preserve Meyer's building. 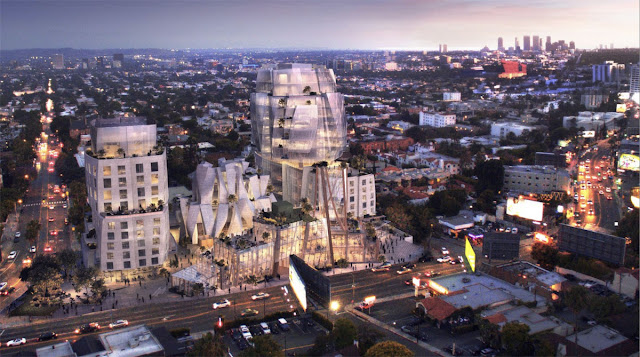 Bart Lytton (1912-69) was a savings-and-loan magnate, art collector, and founder of both LACMA and a vanity museum. He was the Bad Santa version of George Bailey. Lytton boasted of recognizing that the savings and loan business could be merchandized "like girlie shows." He was also a Communist screenwriter who finked on his Hollywood connections in the HUAC hearings, did a hard pivot to capitalism, got his name on a LACMA building, and screwed it out of a promised donation. (It's a wonderful life!)
The site of Lytton Savings' main branch, between Crescent Heights and Havenhurst, has quite a history. It was once the Garden of Allah Hotel, known for wild parties and imported writers such as F. Scott Fitzgerald, Robert Benchley, and Ernest Hemingway. Lytton bulldozed it to the ground within months of buying it in 1959. By some accounts, this was one of several inspirations for Joni Mitchell's 1970 "Big Yellow Taxi," about paving paradise to put up a parking lot. Speaking of parking lots, Ed Ruscha included Lytton Savings in Every Building on the Sunset Strip (1966). It's one of the more eye-catching structures in that parade of banality. 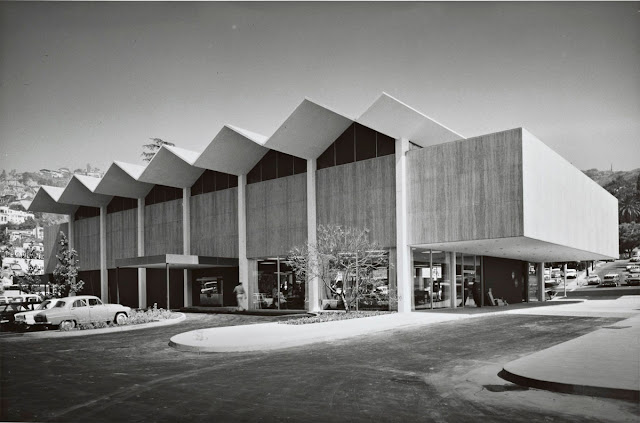 Lytton was a major contributor to the original LACMA. He pledged $750,000 towards the William Pereira building that was intended to house traveling exhibitions. 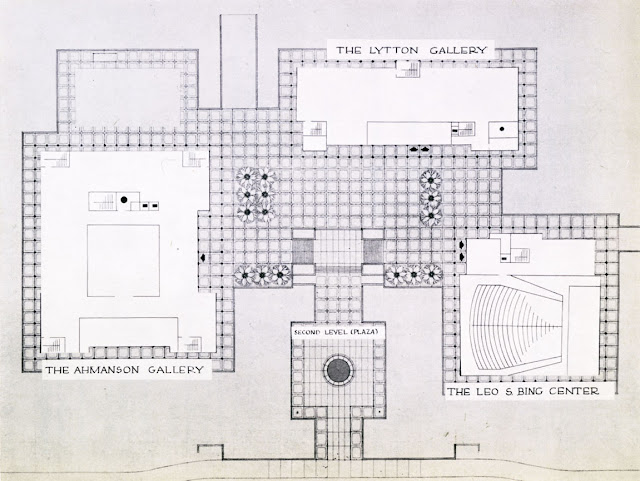 Lytton clashed with fellow trustees such as savings-and-loan archrival Howard Ahmanson, buyout king Norton Simon, and department store tycoon Edward Carter. He demanded that his LACMA naming op, the Lytton Gallery, have two stories, with the upper one reserved for contemporary West Coast art. This put him at odds with his Old Master-focused colleagues. Lytton spoke of  being a "Medici" for 1960s L.A. Simon knew the Renaissance and insisted that L.A. was no Florence.
Lytton gave LACMA a notable Henry Moore sculpture, though not much else. His financial empire collapsed, preventing him from making good on his $750,000 pledge. He quit the board, and his building was renamed for Armand Hammer.
Lytton wasn't out of the museum business. He had already established the Lytton Center of the Visual Arts in his Sunset Strip savings and loan. The center lasted only from 1961 though 1969. It had a long-running show on motion picture history and also early exhibitions of the work of Bruce Conner, Claire Falkenstein, William T. Wiley, and Jack Jajac. This is notable, though the shows, like the Lytton Center itself, are long forgotten. How much more might Lytton have achieved by staying on the LACMA board and insisting on a few more shows of contemporary L.A. art?
Of late the frothier art media have been abuzz about collectors establishing personal museums. The collectors are spun as disruptive innovators, ignoring elitist preconceptions in order to bring art to the masses. Recent success stories (like the Broad and the Hammer) are connected to older success stories (like the Whitney and Frick) with the implication that they are part of a grand and inevitable lineage. Lytton reminds us of survivor bias. We remember the few vanity museums that succeeded against steep odds; forget the many that failed.
Below, photos of the Lytton Center of the Visual Arts. 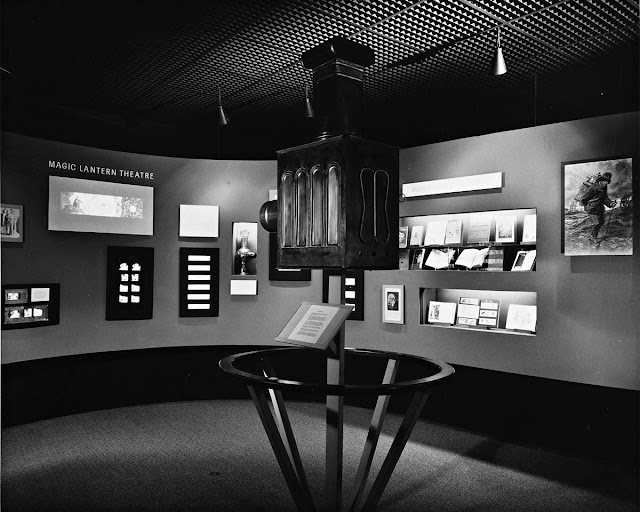 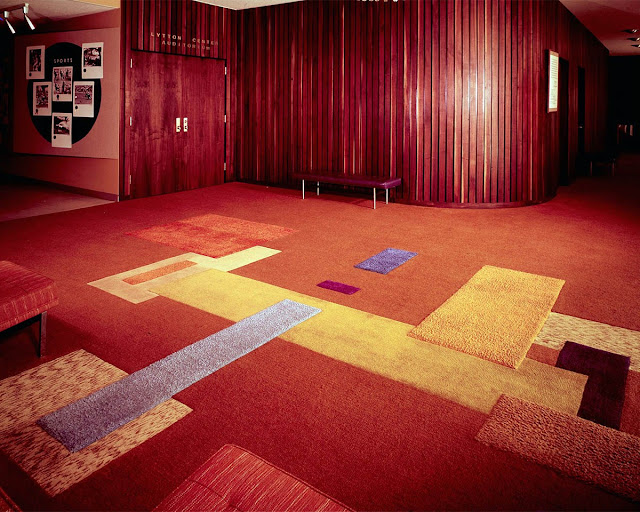 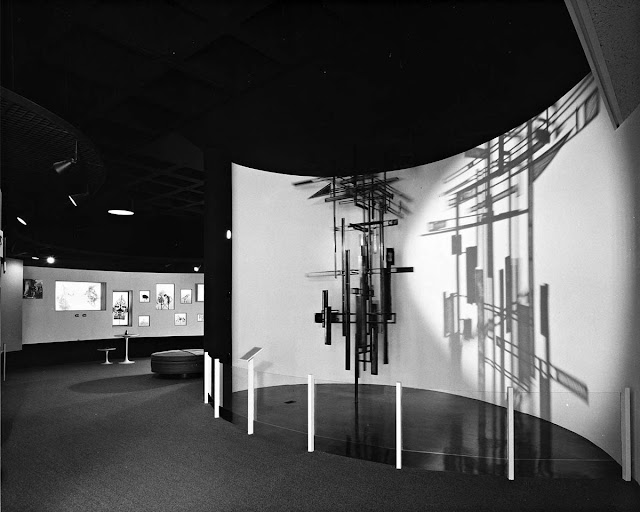