Last year I wrote about the Portrait of the Marquesa of Santa Cruz, once considered a Goya, that was owned by LACMA and later by Imelda Marcos, wife of Philippine dictator Ferdinand Marcos. The Philippines' Presidential Commission on Good Government (PCGG) has launched a website to help locate Marcos artworks. I checked and found that the ex-LACMA Marquesa is reported missing.
Most of the Marcos collection had been bought with public funds to stock the Metropolitan Museum of Manila. The artworks instead ended up in the Marcoses' homes and are now considered property of the Philippine nation.
The site still assigns the Marquesa to Goya. As far as I can tell no one now believes it's autograph. The PCGG site retains a number of wildly ambitious attributions. There's a "Michelangelo" easel painting and a "Velázquez" that was recovered and sold for $50,000. Uh-huh.
Anyone knowing the current whereabouts of the Marquesa can report it on the PCGG site. Until a few years ago, the painting was in Imelda's Manila home, as shown in Steve Tirona's satirical 2009 portrait. 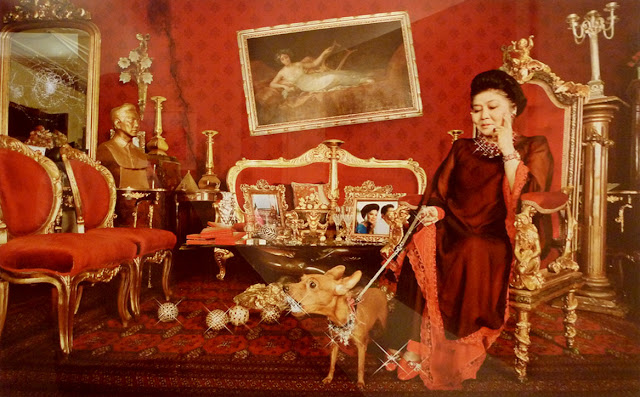