"Golden Kingdoms" at the Getty

No American city is subverting more art-history hierarchies than Los Angeles this fall season. That starts with the chronologically first PST LA/LA exhibition, the one that might seem the most staidly conventional. "Golden Kingdoms: Luxury and Legacy in the Ancient Americas," at the Getty Center, is a crowd-pleasing "treasures" show of spotlighted objects in darkened galleries. But it's built around paradigm shifts as much as golden plunder.

Indigenous Americans were mystified at the Spaniards' obsession with gold. Meso- and South America was well supplied with the stuff, described as divine excrement. They had silver out the wazoo and, in some regions, platinum (regarded as off-brand silver, difficult to melt). Americans were expert gold workers but they prized green jade over any so-called precious metal; likewise turquoise, textiles, feathers, and sea shells. "Golden Kingdoms" is thus a meditation on the relativity of value. With Bitcoin, Silicon Valley, and a global art market minting money from nothing, its theme is as contemporary as any other PST LA/LA offering's. 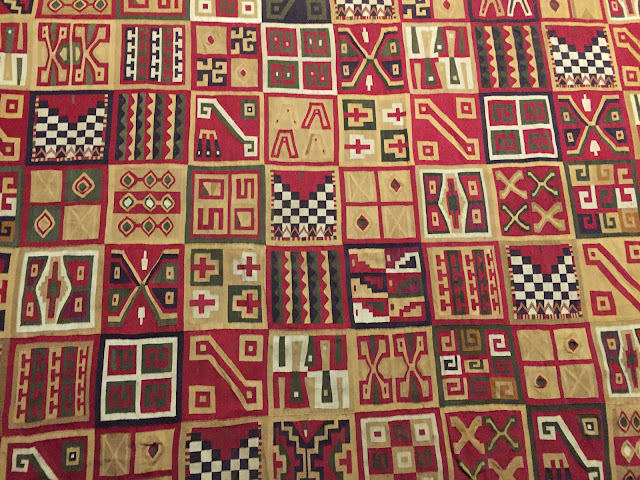 Above is a detail of one of the rarest objects in the show, the only surviving example of a royal Inca tunic. Each square motif is concrete art to us, but a heraldic emblem to its original wearer and viewers. Only a king of kings was permitted to wrap himself in a flag of all flags. According to the gallery label, it's a llama-cotton blend "so fine that it feels like silk taffeta." 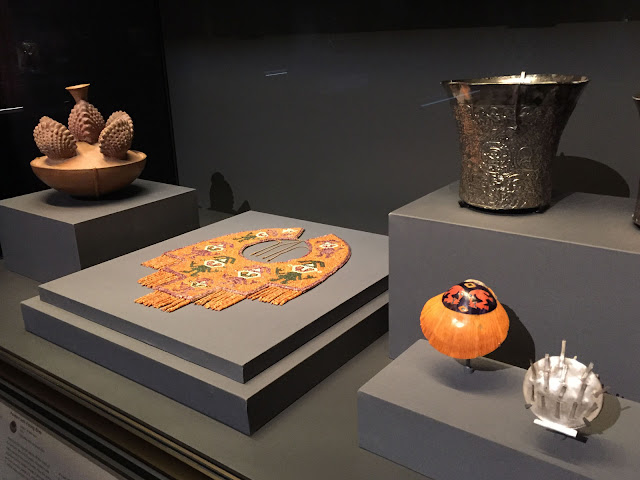 A word you'll come across a lot is Spondylus. That's the "thorny oyster" described by Linnaeus in 1758 and prized by sea shell fanciers worldwide. Spondylus is found from Tijuana to Peru and Florida to Rio. Our age's fussy collectors and natural history museums insist on complete specimens. The Andean ancients made beads and buttons from Spondylus shell; they valued replicas in downscale media such as terra-cotta and silver. Right of center in the above photo is an orange Spondylus shorn of its trademark thorns and inlaid with turquoise. 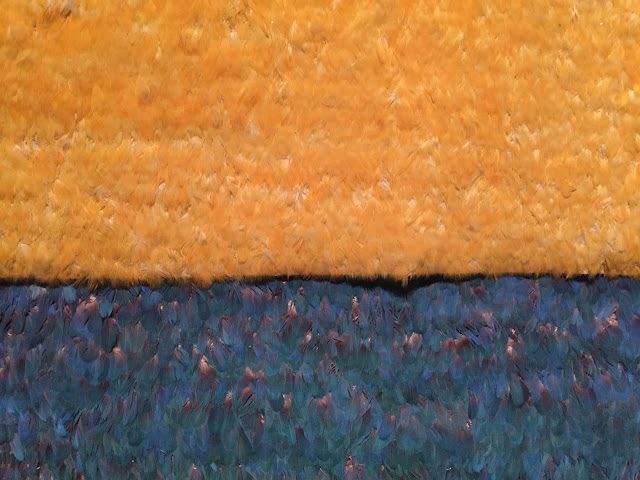 A mural-size set of Wari (Peru) Feathered Panels, 600-900 AD invites comparison to the heroic sort of 20th-century abstraction. You need to take Rothko's advice and stand close to appreciate it fully. The overall pattern, a checkerboard of horizontal rectangles, resolves into iridescent feathers of the macaw parrot. 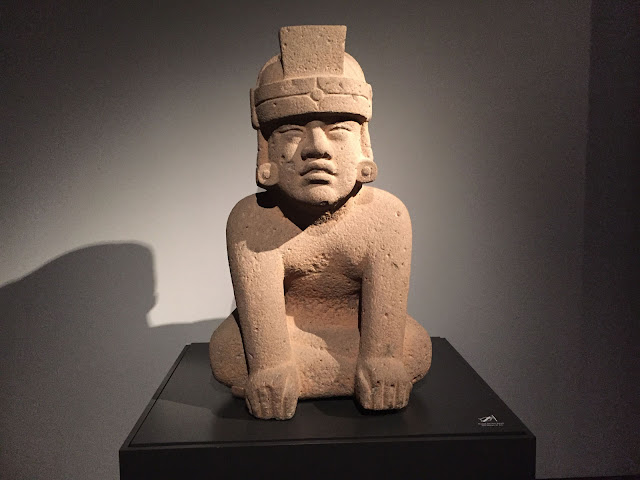 Although "Golden Kingdoms" isn't a sculpture show, there are some major examples showing how crowns and earflares and such were worn. Above is "The Prince," Olmec, 1200-900 BC. The Olmecs transported their basalt sculptures from remote quarries, probably by river raft. 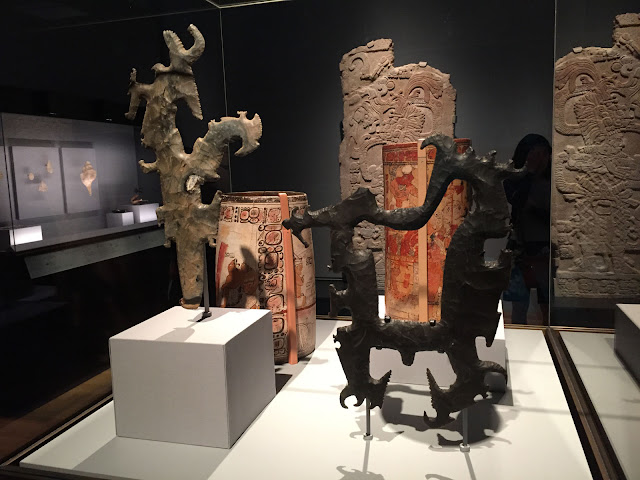 Mesmerizing (but hard to photograph) are two Mayan Flint Scepters with Profile Figures. They refer to the lightning god K'awiil. We might recognize them as fractals, for they incorporate multiple profiles of K'awiil, who takes such jagged forms as his attribute.

"Golden Kingdoms" is one of the Getty's biggest shows ever, with about 300 objects filling every square foot of the Exhibitions Pavilion. For L.A. audiences with even the slightest interest in global antiquity, it easily rivals the Fowler Museum's "Royal Tombs of Sipan" (1993) and LACMA's "Olmec: Colossal Masterworks of Ancient Mexico" (2010).

Richard Meier hates signs the way Tesla drivers hate front license plates. Ever since the Brentwood campus opened, some visitors have had trouble finding the Exhibitions Pavilion, at the top of Meier's pristinely unmarked staircase. That shouldn't be a problem with this show. 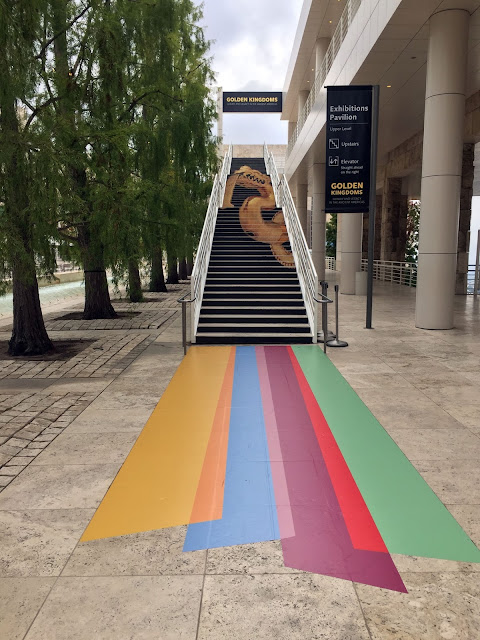 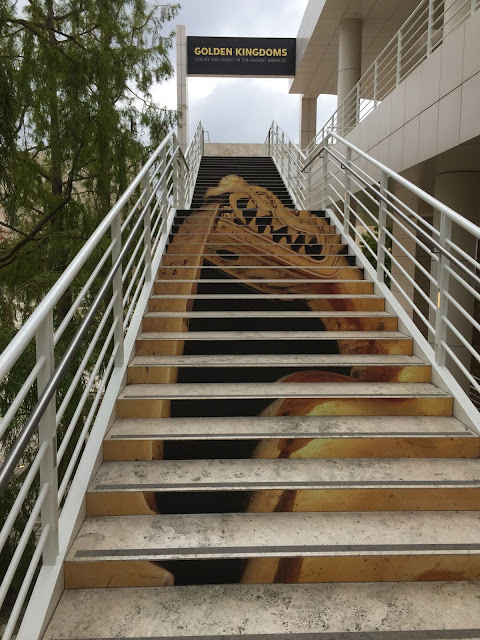