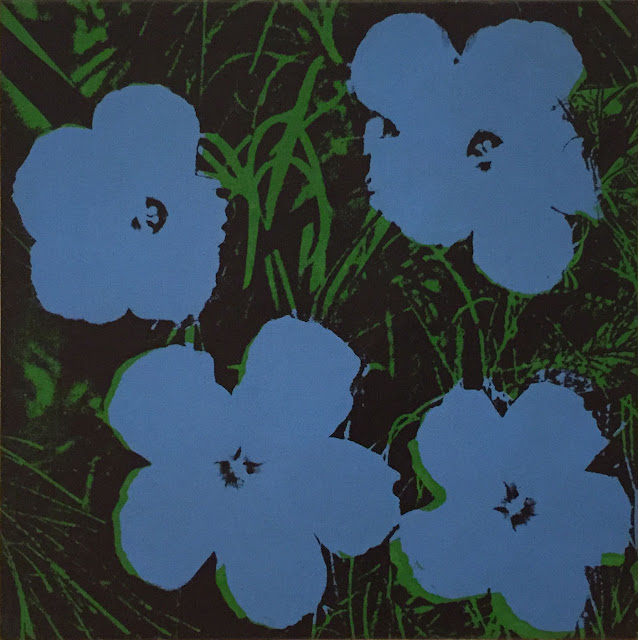 MOCA has been given an early example of Andy Warhol's Flowers (1964) from the Robert M. and Mary Looker collection. The Lookers are also responsible for major donations to LACMA, including paintings by Gerhard Richter and Max Beckmann. 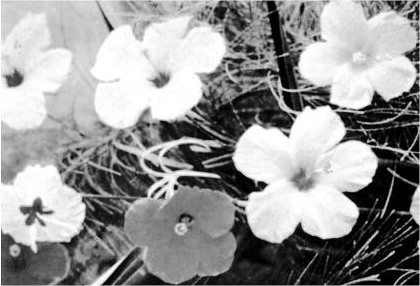 The MOCA Flowers is two-foot square. Warhol chose the square format so that the paintings could be shown in a grid or massed for a wallpaper effect. The image is based on a photograph in the June 1964 issue of Modern Photography. Taken by editor Patricia Caulfield, left, it showed seven hibiscus blossoms in a flower arrangement at a Barbados restaurant. The photograph illustrated an article on photographic processing methods.

Pansies is relevant today, with the Flowers read as queer art. But pre-Stonewall they came to be identified with the floral motifs of 60s youth culture and with "flower power." The term was coined by Alan Ginsburg in 1965, so there too Warhol was ahead of the curve. "Flower Power" became the title of a famous 1967 news photograph by Bernie Boston, showing a Vietnam War protestor placing a carnation in the barrel of a rifle. 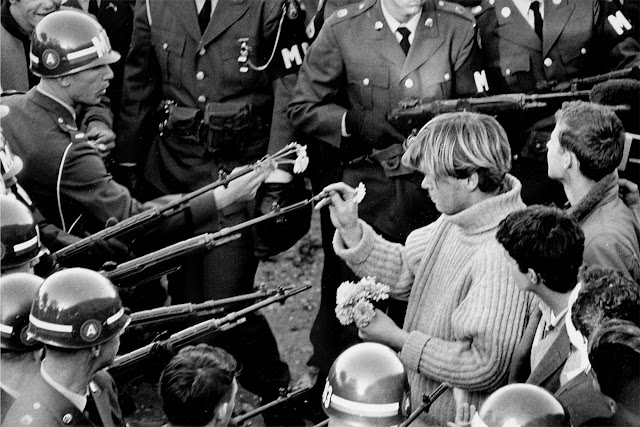 The protestor was later identified as George Edgerly Harris III, a New York actor who moved to San Francisco in the Summer of Love and changed his name to… Hibiscus.

The original hibiscus photographer, Patricia Caulfield, sued Warhol in 1966. She and Warhol came to a settlement in which Warhol paid Caulfield a royalty on each Flowers painting and gave her two paintings, one to pay her attorney. The settlement allowed Warhol to keep using the Flowers image, and he did.

The MOCA painting is evidently one of the group created for Warhol's first Leo Castelli show in Nov. 1964. Twenty-eight two-foot paintings were displayed in a 4-by-7 grid, consciously echoing the Ferus Gallery showing of the Soup Cans. The two-foot canvases were shown with larger paintings measuring 48 and 82 inches square. (Below is Rudy Burckhardt's photo.) 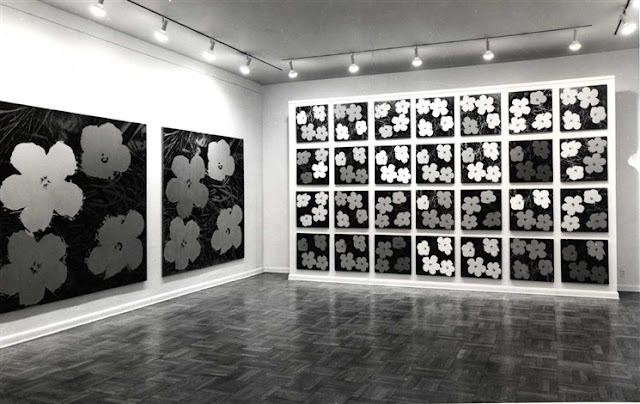 Warhol and Factory turned out Flowers paintings in sizes ranging from 5 inches to 10 feet. There's a five-footer Flowers (1964) in the Broad Collection and a ten-footer (1967) at the San Diego Museum of Contemporary Art. 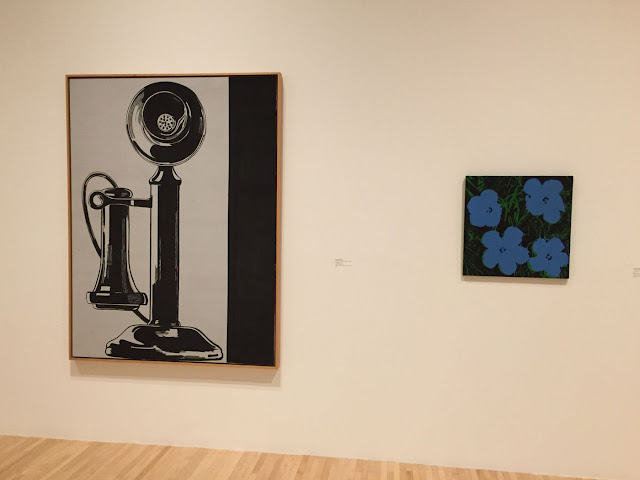 With all the fanfare given buzzy new private museums, it's welcome news when collectors support L.A.'s public museums. Given the importance of the Looker gifts to MOCA and LACMA, it's amazing how little attention they've received. Also on view at MOCA is another recent Looker donation, Joseph Kosuth's '215 Twice (+216., After Augustine's Confessions)', 1990. St. Augustine's meditation on identity and duplication makes an interesting comment on Warhol v. Caulfield. 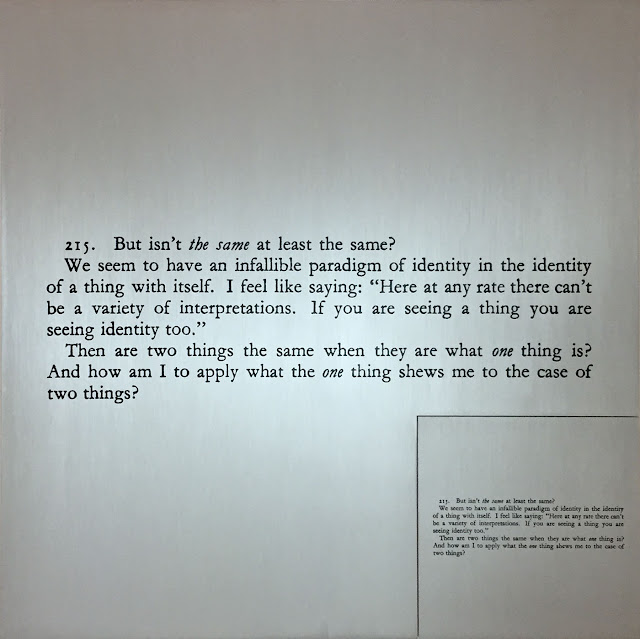 The Dreamer said…
I saw this painting at MOCA and wondered if it was new since I've never seen it before. I wish donations like these were better publicized so that other philanthropists will be enticed to donate their paintings to existing art institutions rather than create a private ones.
September 5, 2017 at 11:03 AM

Anonymous said…
"Given the importance of the Looker gifts to MOCA and LACMA, it's amazing how little attention they've received."

Well, I come here to stay updated on what's happen in LA's art institutions. And I agree, these museums should have press releases for any major donation.
September 6, 2017 at 7:37 AM

The Dreamer said…
I'm assuming the Lookers didn't want any publicity from it, which is why there's no press release, but I really wish they would become more public about it. It's sad that philanthropists like David Geffen and Eli Broad only give money to institutions that will name something after them.
September 6, 2017 at 8:03 AM

Anonymous said…
Doesn't help that bi-coastal people like David Geffen lavish big money on other communities. His donation to Lincoln Center, as one example, far exceeds whatever he's given to an LA-based cultural-artistic institution. Definitely more than what made MOCA believe several years ago justified placing his name on its original Temporary Contemporary in Little Tokyo.

The Music Center is in great need of an upgrade, which was talked about over 10 years ago. As for MOCA, it's too small after all these years, certainly its building on Grand Avenue.

That's one reason why visitors aren't as enthusiastic about visiting it. A setting that can be walked into and out of after a rather short jaunt is less of a satisfying experience than a place that's larger and which offers more to look at and spend time with.
September 6, 2017 at 11:34 AM