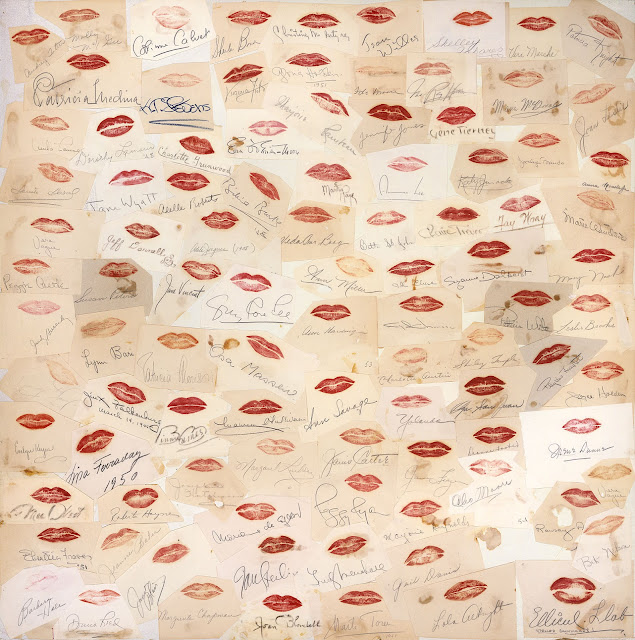 Wednesday the Academy Museum of Motion Pictures held a press conference to celebrate the $50 million gift of Cheryl and Haim Saban, he of the Mighty Morphin' Power Rangers franchise. The museum also released new renderings and announced new acquisitions. One, above, is a collage of old-time movie star lip prints by make-up maven Clay Campbell. Opening is now projected for 2019. 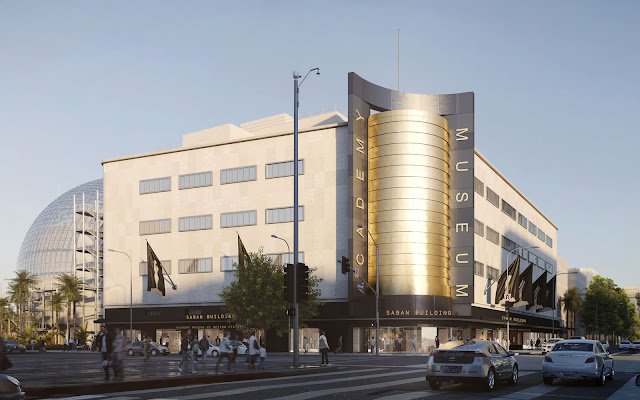 Mighty Morphin' Millions. The Saban gift becomes the museum's biggest pledge ever. It goes a long way to quell concerns about stalled money raising. The museum says it's now raised $288 million of its $388 million goal, or 74 percent. There's still a long way to go, especially if "internal projections" of an over-$400 million total cost are accurate. The May Company building is to be rechristened the Saban Building. 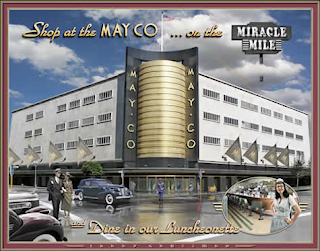 The facade. There had been talk of somehow sticking an Oscar statue on Albert C. Martin Sr.'s 1939 streamline moderne building. That idea is off the table. The Academy Museum signage is prominent, but so was the old May Company signage. The May Company used vertical text, which seems more agreeable to me than the rotated text of the AMMP rendering. There does not seem to be much risk that anyone will forget who got the building's naming opportunity.

Theater, exhibition space. A below-ground, 288-seat theater will operate as a cinematheque. Depending on how it's programmed, it could be a vital contribution to the city's culture. The permanent collection will be shown on the second and third floors. This consists of a chronological survey of motion pictures. Part of the third floor houses the "Oscars Experience," selfie-bait in which visitors can snap pictures holding an Oscar. Director Kerry Braugher promises an active program of temporary exhibitions on the fourth floor. There is also a Spielberg Family Gallery on the the first floor, along with the lobby, restaurant, and gift shop.

The sphere. Renzo Piano's controversial sphere promises three distinct experiences. Beneath the truncated sphere is a plaza, pitched as an appealing urban space. The rendering is gorgeous. It is not a shadowy, freeway-under-pass catacomb. Rather, the underside positively glows as late afternoon light hits an oatmeal-colored ground. Cf. Zumthor-LACMA. More than one architect and museum director is betting that starchitecture shade will draw crowds in sun-drenched So. Cal. 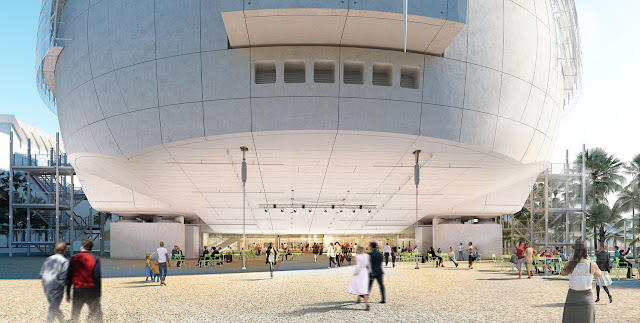 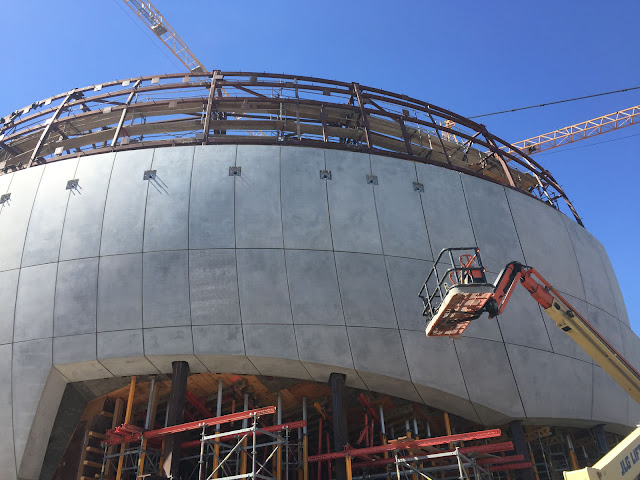 The main part of the sphere is the 1000-seat David Geffen Theater for large events and screenings. It is enclosed in steel-reinforced concrete, much of it already in place. 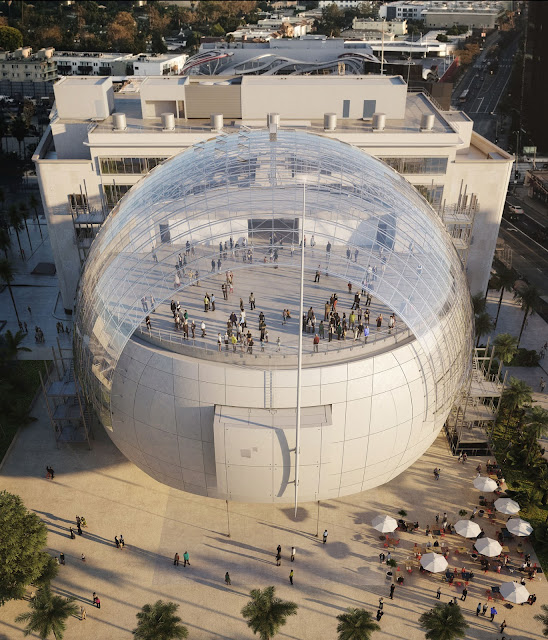 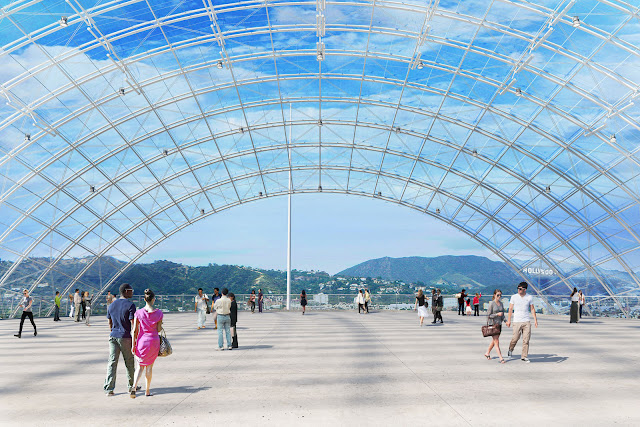 The most interesting part of the sphere is the glass-enclosed terrace at top. This has spectacular views of the city, including the Hollywood sign. The north end is open, and it's said that technology will adjust the sunlight to avoid it becoming a big greenhouse. What will the terrace be used for? I don't think it matters. Having seen the approximate view from the construction site, this space is going to be a must-see, like the top of the Eiffel Tower. OK, the Eiffel Tower is taller, but this is taller than the top floor of the BCAM steps (also a nice view), and it's 360 degrees. 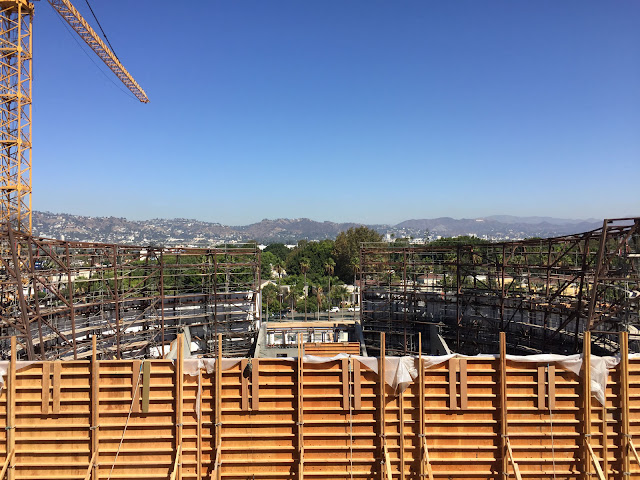 The Big One. The four pillars supporting the sphere are on seismic isolators, designed to move as much as two feet in a big quake.

The collection. This is a movie museum, so the most important thing is the movies that will be shown in its theaters and (as clips) throughout the galleries. As to objects, AMMP basically has two collections. There the Academy's "library" collection, an immense trove of documents that have been assembled almost since the Academy's 1927 founding. These are mostly two-dimensional: over 12 million production stills and other photographs; 80,000 screenplays, many annotated by directors and actors; 61,000 posters; 20,000 film and costume-related drawings—"narrative art," as they say. 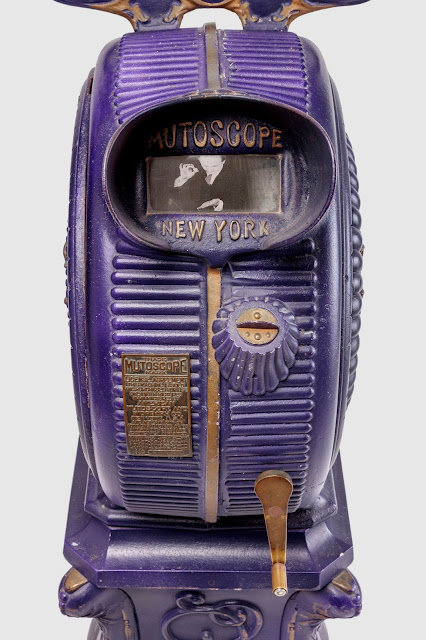 It is only since 2008 that the Academy has been pursuing 3D objects for their appeal as museum exhibits, like the Wizard of Oz ruby slippers. This part of the collection now has about 2500 objects. There has been a move to acquire works from throughout the globe. There has also been an emphasis on the history of motion picture technology. Recent acquisitions include Akram Miknas' collection of pre-cinematic technology. Pre-cinema fangirls will be able to zone out on mutascopes, zoetropes, cameras obscura, and phenakistiscopes. Optical illusion to Hollywood was a long hard road.

Here is the typewriter Joseph Stephano used to write the screenplay for Psycho (1960). 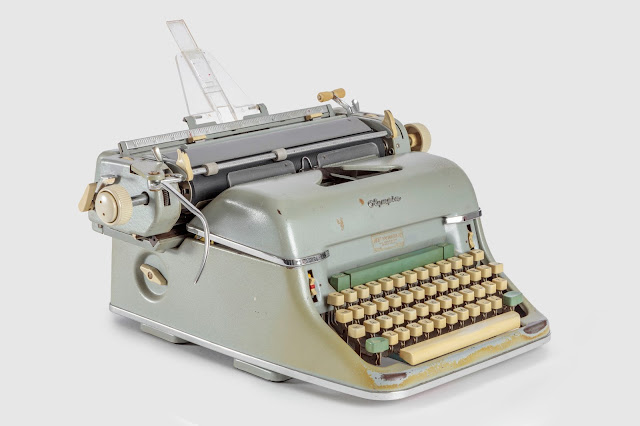 Another smart new acquisition is an Oskar Fischinger Lumigraph. This is a device that the inventive modern painter/Disney Fantasia animator patented in 1950. A performer presses hands and fingers against a framed rubber sheet, producing a trippy light show. (Still of a performance below). Fischinger performed the Lumigraph at his home, in L.A. galleries, and at the San Francisco Museum of Art (today's SFMOMA) in the early 1950s. It's a document of the intersection of art and film, body and technology, gimmickry and the sublime. 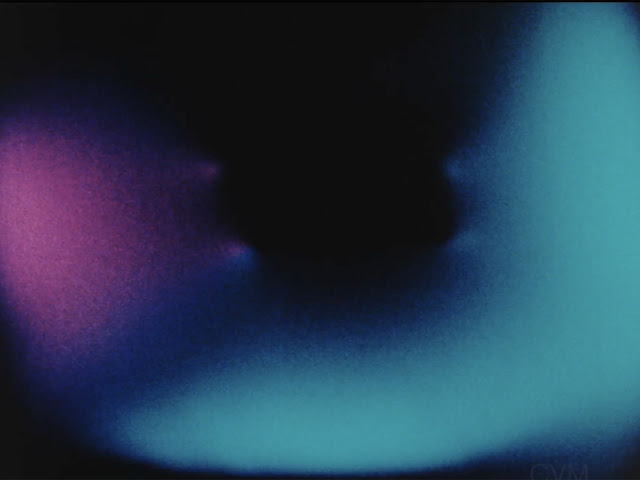