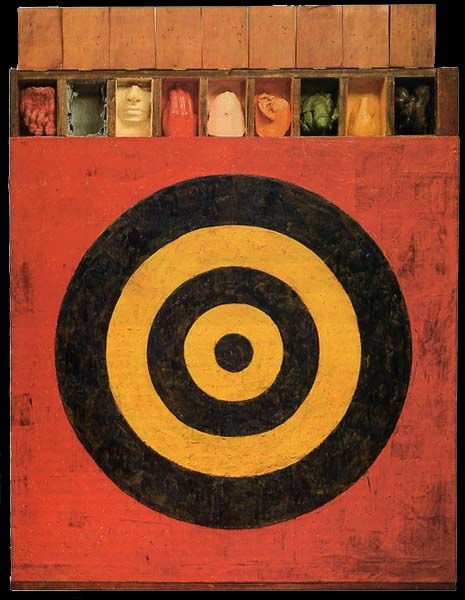 David Geffen's $150 million gift towards LACMA's Peter Zumthor building—to be christened the David Geffen Galleries—has revived speculation about the fate of Geffen's personal art collection. In a phone interview with the Los Angeles Times, Geffen allowed that it's possible will he will leave part of the collection to LACMA, but hadn't given it much thought: "Hopefully I'm not going to die for a long time." (Shown, a Jasper Johns that Geffen owns: Target with Plaster Casts, 1955.)

Geffen's name is also on MOCA's Geffen Contemporary, a naming right that went for a mere $5 million in 1996. The naming, then seen as a gesture that might lead to future donations of art, was controversial. "They sold out much too cheap," complained gallerist Margo Leavin at the time.

But Eli Broad felt it was "perfectly appropriate for someone making that size gift who has a great collection." Calling naming opportunities "the American way," Broad described Geffen, who is gay, as "a man who is single, who doesn't have any children, and probably will have another three-quarters of a billion dollars to give away… Hopefully some of David's art will come to MOCA too."

It didn't. In fact Geffen has had little visible involvement with MOCA since. It's rumored that he objected to Broad's heavy-handed control of the MOCA board in the 1990s and 2000s.

In 2006 Geffen sold major paintings by Pollock, De Kooning, and Johns, leading to speculation that he was liquidating the entire collection and/or trying to buy the L.A. Times. So far he's done neither. It's said that Geffen has less than 50 major works, tiny as billionaire collections go, but each of exceptional quality.

Geffen also has ties to the Museum of Modern Art. He gave them $100 million last year. That, along with a $100 million gift to the New York Philharmonic, led some New Yorkers to assume Geffen had abandoned L.A. and would be focusing his philanthropy on his hometown. A New York Times piece last year said that "Mr. Geffen will ultimately leave his art collection, valued at more than $2 billion, to his foundation, which will give the pieces to institutions or sell them and donate the proceeds to his main causes: culture, medicine and education."

Dealer Richard Polsky said: "I'd rather have his collection than Eli Broad's."

Anonymous said…
This is like a case of good news, bad news.

First the good news: An important cultural institution in LA is going to receive a large donation.

Now the bad news: Due to that gift, it's now more certain that institution will be physically and financially ripped apart for years, if not decades, to come because of its current director's and trustees' vanity project, all in cahoots with their au-courant, I'm-so-hip architect.

Anonymous said…
How so? The new building should lower a significant amount of maintenance/repair costs and save LACMA a lot of expenses than it currently has to wrestle with. You underestimate how much repair the current buildings require. This was one of the reasons given for why the renovation is needed.
October 6, 2017 at 5:27 AM

juanito said…
Regards maintenance/repair costs of Zumthor's wonder, consider such costs in the wake of a serious earthquake. Such a MASSIVE amount of reinforced/cantilevered concrete (near one thousand feet from north end to south end) supported by seven (7) pods sitting on a site with a high water table and subterranean pockets of pleistocene goo. Every local architect knows well that long/low/liner structures are particularly subject to seismic damage. Did Zumthor design the building based upon definitive geotechnical data for each cubic meter of strata beneath the site, say to at least a hundred feet below grade? No? No knowledge of where all of those pockets of goo reside? Has a geotechnical consultant weighed in? Even if the substrata is adequate, it seems as though one gigantic mat foundation integrating all of the pods might be required to support the weight in a serious/sustained seismic event. And remember also, both the Sylmar and Northridge quakes set new world records for vertical accelerations.

Even a moderate quiake could shatter all of the glass along the perimeter gallery.

If only the L A Times would do the town a public service on this proposal and consult/interview a highly qualified structural engineer and verify the structural integrity of such an exorbitant design. And if a definitive/deep subsurface investigation has not as yet been made, what then?

Wilshire Boulevard does not need a hovering, funereal sepulchre which would separate the avenue - east from west and vice versa. The design is more adequate for the empty environs of Zabriskie Point. Where will the West Coast's largest art institution find itself in the wake of a long predicted major earthquake? Our present prospect is surely no time for vanity. Give vanity the boot and call Frank.
October 7, 2017 at 12:52 PM

Anonymous said…
Plus, a visit to the Zumthor designed museum in Cologne reveals a museum that is extremely rigid in its design and completely inappropriate for the kind of revolving exhibitions that a LACMA must house, as well as the large numbers of visitors that a major public museum will welcome. (And the renderings look like a corporate center, not a museum.) Govan's explanation that since the new Piano buildings are so flexible, LACMA doesn't require another such space is wrong. By inflexible, they seem to mean not only the spaces, but the fact that somehow lighting all the art with windows on the side and concrete ceilings is going to be workable. As for the supposed price of $600m, in keeping with the comment above, I think they have NO IDEA about how much this unusual building will cost. Even the Piano dome at the new movie museum has gone over-budget and Piano has the experience of designing many, many wonderful museums. So, I think Zumthor's reputed numbers to date are complete fiction.
October 7, 2017 at 5:48 PM