Kusama Is Not All Selfies and Mirrors 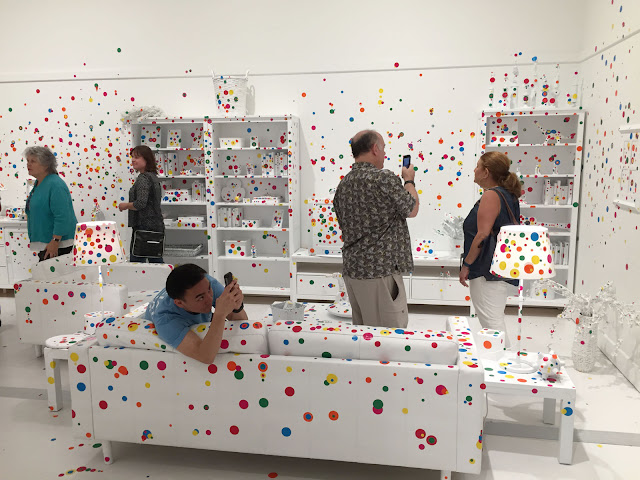 The Broad's "Yayoi Kusama: Infinity Mirrors" is being taken more breathlessly than seriously. But there's more to Kusama than the mirror and polka-dot rooms. Some of the show's best things are rarely seen works on paper. I fear they're rarely seen here. Some visitors go directly from one mirror room to the line for the next, not bothering to look at paintings and drawings close-up. (At top, the Obliteration Room).

Kusama was just 24 when she made The Island in the Sea No. 1, 1953, a small gouache/pastel. It bears comparison to 1950s Sam Francis while anticipating the Infinity Nets and Polka Dots. 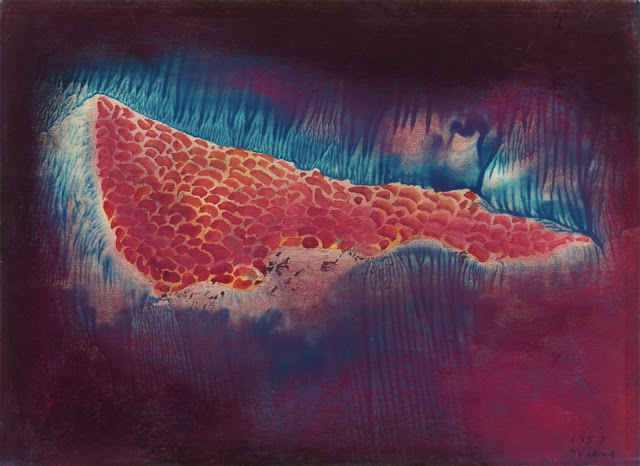 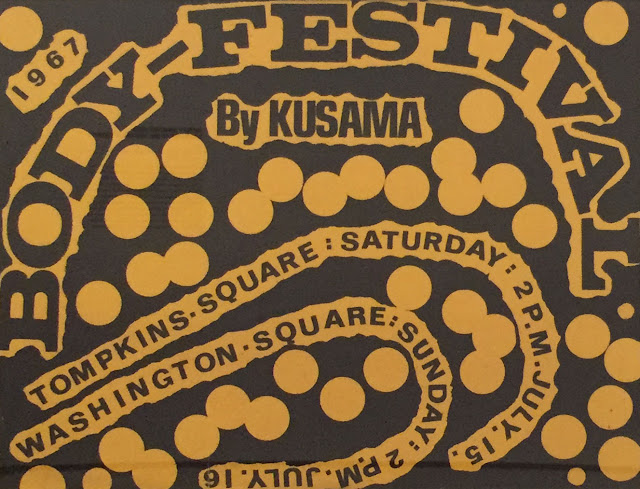 By the mid 1960s Kusama was a key figure in New York's happenings and hippies scene. She was involved in Vietnam war protests and the early brand of feminism that was often linked to "free love." The mirror rooms are rooted in this zeitgeist. Kusama's first mirrored environment, Phalli's Field (Floor Show) dates to 1965. It's in the show, or rather a version of it is, dated 1965/2016. Period photos show that the original did not have a ceiling. Kusama, in red jumpsuit, stands or reclines among the polka-dot phalluses. (Visitors now have a cleared walkway.) 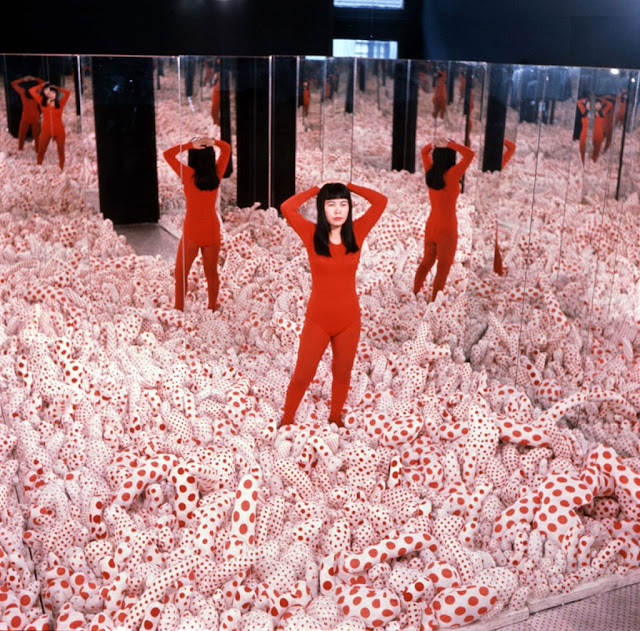 I had long assumed that Lucas Samaras was the godfather of mirrored rooms as modern art. His Room No. 2 (at Buffalo's Albright-Knox Art Gallery) is dated 1966. That's the year after Phalli's Field. The Samaras room was acquired by Albright-Knox the year of its creation. Below is a 1966 photo of the dapper artist in his room; a recent photo of Room No. 2; and a photo of the Kusama Phalli's Field as it now exists. 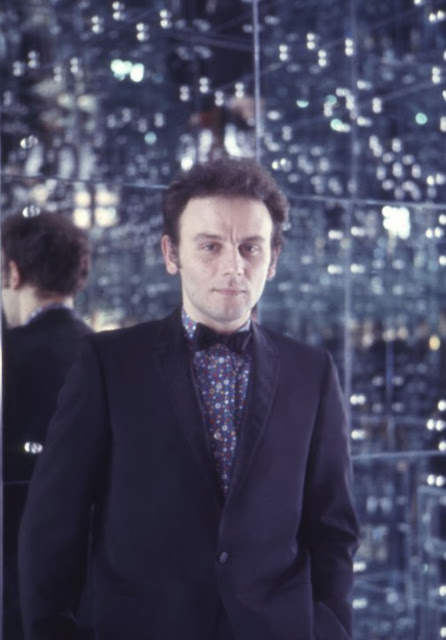 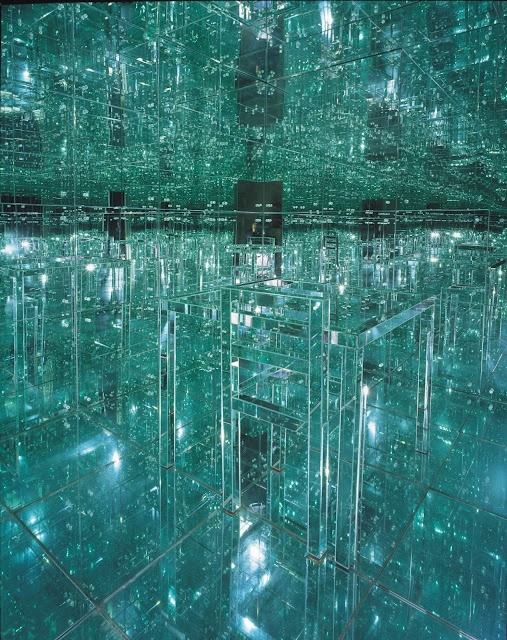 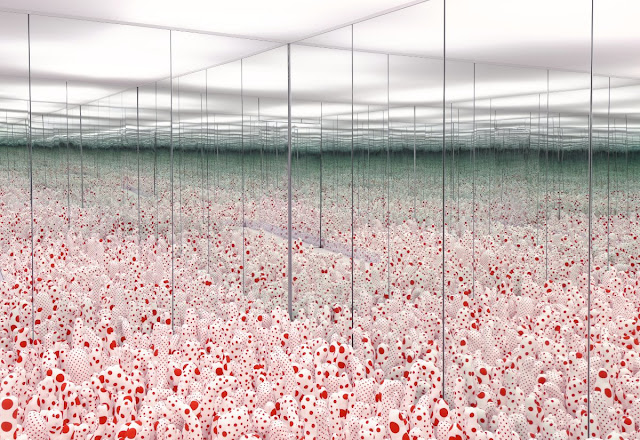 In 1966 Kusama did another mirrored space, Love Forever, also in the show in refreshed form. This is the small room you peep into (or your cell phone does), though Kusama posed inside the original installation.

Yet it was Samaras' room—mimimalist and serious—that entered the canon. Kusama's more playful, female-gaze rooms didn't. It's hard to believe that gender didn't play a factor. (In any case the Kusama resurgence is now eclipsing the reputation of Samaras' room.) 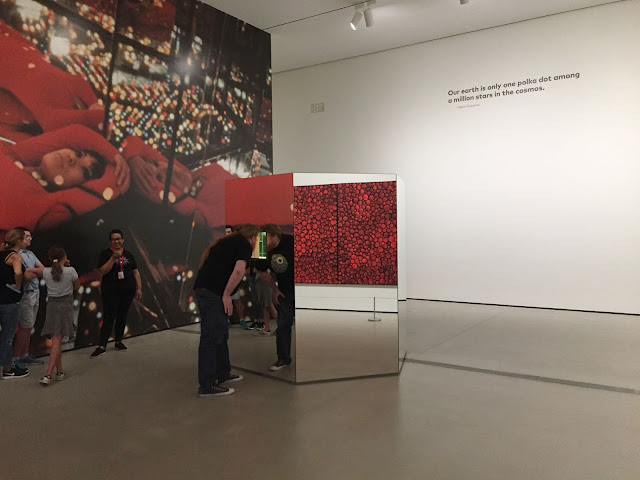 The Broad has some mesmerizing Infinity Net paintings. I saw a few visitors snapping photos against the largest (as if they were a red-carpet backdrop). 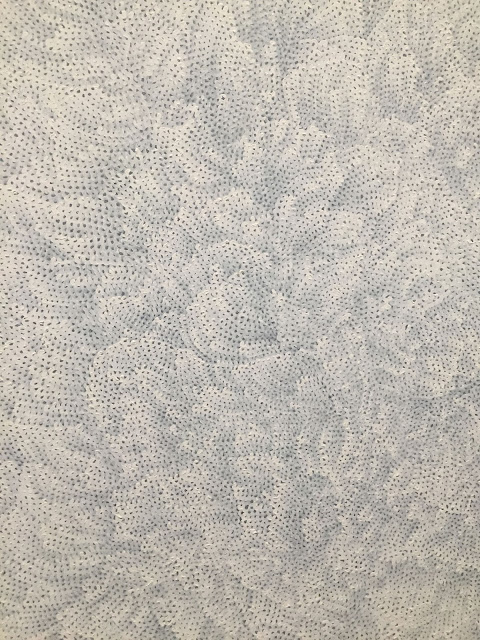 Kusama was romantically linked to Donald Judd and Joseph Cornell. Cornell was infatuated with her, despite being 26 years older. Kusama described the relationship as platonic. They were close enough that she spent days at a time with Cornell, domineering mom, and invalid brother in their Utopia Parkway, Queens, home.
Cornell died a virgin (says Deborah Solomon's biography). He was mourned by Kusama, who created a series of collages in his honor. They were shown in Tokyo in 1975, after Kusuma had returned to Japan. The several examples here are spectacular, the more so for being a departure from Kusama's signature work. Below are Flower and Soul Going Back to Its Home, both 1975. Possibly made with clippings that Cornell gave Kusama, they conjure the American Gothic vibe of Utopia Parkway. 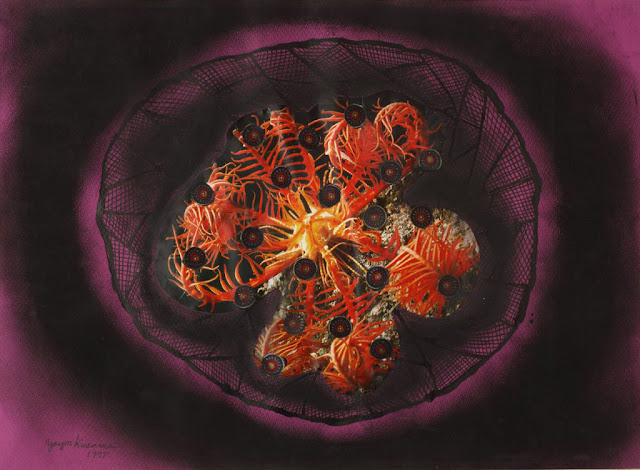 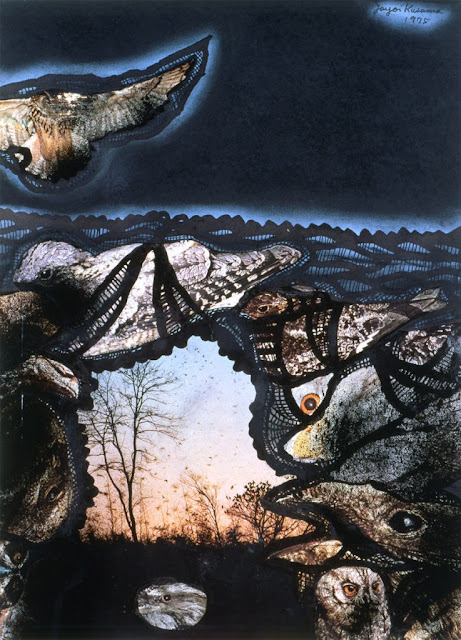 JMM said…
I liked this article. I saw the Kusama Infinity Rooms exhibition in DC at the Hirshhorn Museum. Like the writer, I was completely taken by surprise by her exquisite paintings and fell immediately in love. Most of the visitors rushed past them to get in line for the next room. Thank god Kusama is finally getting her due in her lifetime.
March 8, 2020 at 4:24 AM