A Short History of Long Rauschenbergs 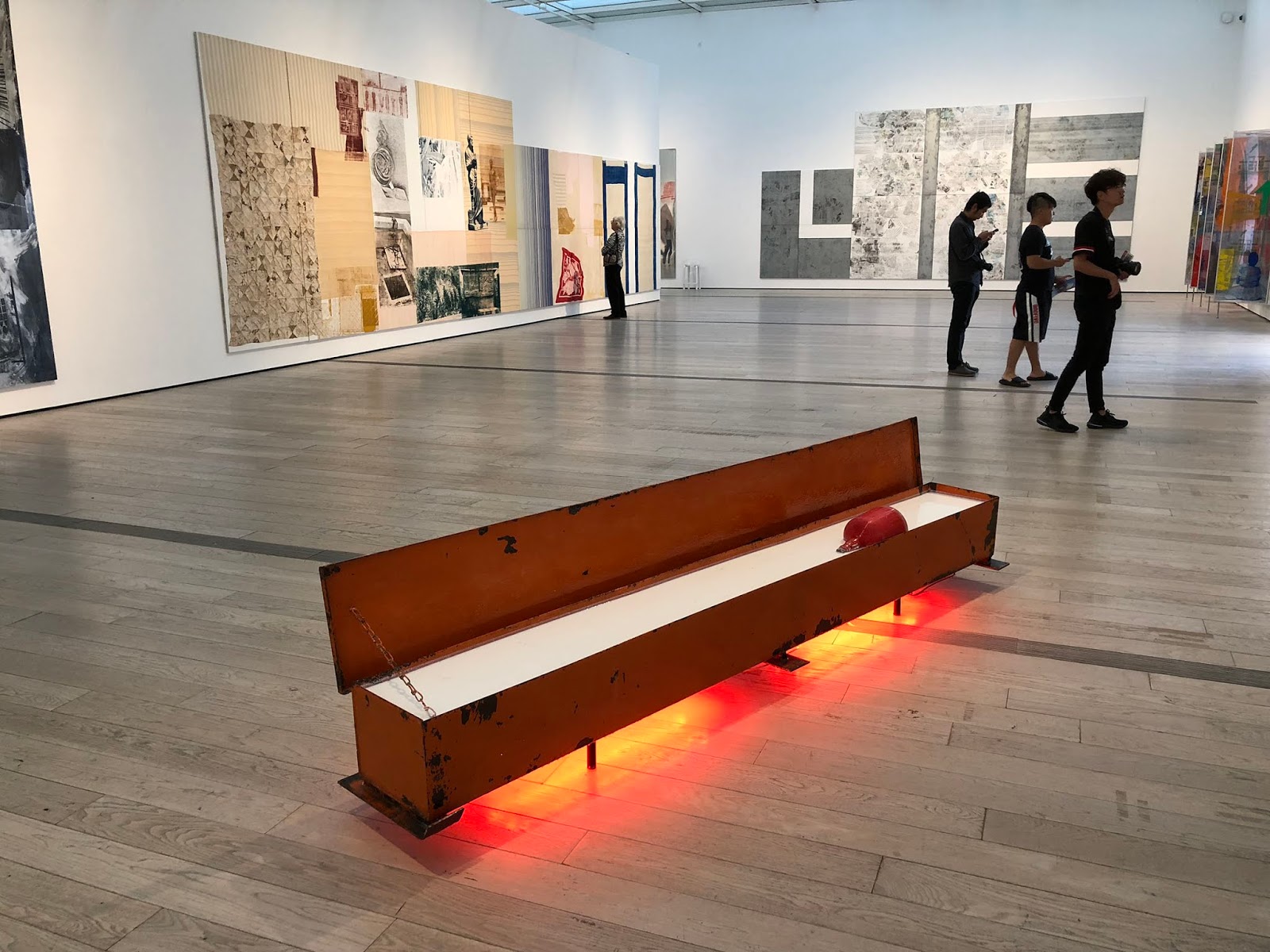 Robert Rauschenberg said he intended The 1/4 Mile or 2 Furlong Piece (1981-98) to be the world's longest painting. Guinness World Records differs, but The 1/4 Mile sure is long (and the Guinness guy is no Rauschenberg). The 1/4 Mile is now at LACMA, which gets into the superlative business itself by saying its presentation is the first time the entire piece has been shown. The same claim was made when The 1/4 Mile was exhibited at the Ullens Center for Contemporary Art, Beijing, in 2016.

The 1/4 mile refers to the distance between Rauschenberg's home and studio on Captiva Island, Florida. At LACMA 1/4 Mile occupies the entire top floor of BCAM. It winds around two big galleries with central partitions, plus a connecting hall, all under Renzo Piano's magisterial light.
The 1/4 Mile draws on Rauschenberg's interests in very, very long artworks subject to the element of chance. In Rauschenberg's Automobile Tire Print (1953) John Cage drove his Model A Ford through a puddle of black paint and onto a 22-foot length of glued paper sheets.
Hiccups (1978) is an installation of 97 small prints/collages to be hung in a row or rectangular grid. In it is most linear configuration Hiccups can stretch 63 feet.

Begun three years after Hiccups, The 1/4 Mile is scaled up in size, ambition, and seriousness. It consists of 190 mixed-media murals, free-standing sculptural elements, and an ambient soundtrack.
Rauschenberg worked on 1/4 Mile for 17 years. He was once asked whether he would ever finish it. His answer was, "Well, yeah, one day. If you get my drift."

Actually Rauschenberg ran out of space before he ran out of time. He achieved the 1/4 mile, more or less, in 1998, completing the work. He lived another ten years.

In 1999 Rauschenberg created another large multipanel work, Synapsis Shuffle. Potentially 220 feet long, this is an interactive piece in people other than the artist decide how to arrange 52 large prints/collages. When debuted at the Whitney in 2000, the celebrity shufflers including Martha Stewart, David Byrne, Chuck Close, Merce Cunningham, Robert Hughes, Walter Hopps, and Michael Ovitz.

"It is also amazing how Mr. Rauschenberg himself has kept shuffling the same ideas, more or less, into larger and larger projects that take up enormous gallery space the country's museums.… The pretentiousness of 'Synapsis Shuffle,' the celebrity-kissing self-promotion it has involved, and the wasteful allotment of 6,000 square feet of gallery to it at the space-challenged Whitney are not cause for celebration."

Glueck further lamented that Leonard Lauder has already bought Synapsis and promised it to the Whitney, for an eternity of future celebrity shuffling. ("I think Synapsis Shuffle is as good as the Combines," countered Arne Glimcher. Not exactly impartial, he had sold it to Lauder for a reported $9 to $10 million.)
The Whitney has not shown Synapsis Shuffle since. There had been talk of touring it to other American museums. That wasn't realized until a 2012 showing at the Grand Rapids Art Museum. The shufflers were West Michigan celebrities (a furniture designer, a medical professor, the artistic director of the Grand Rapids Ballet) and the winner of a Facebook video contest.

Where does that leave The 1/4 Mile? Today everyone agrees that Rauschenberg had a front-loaded career, peaking with the Combines of the 1950s. But the art market saw things differently. Rauschenberg's market value continued to soar long after the quality of his work was in decline.

Aside from the epic concept of a 1000-foot long artwork 17 years in the making, The 1/4 Mile is not a deeply original work. It is backward-looking, intended in part as a personal retrospective in the spirit of Duchamp's Boîte-en-valise. However, it shows a level of painterly and sculptural invention unlike many of the late works churned out for the market. The 1/4 Mile presents the "late style" of an artist who often isn't considered to have one. 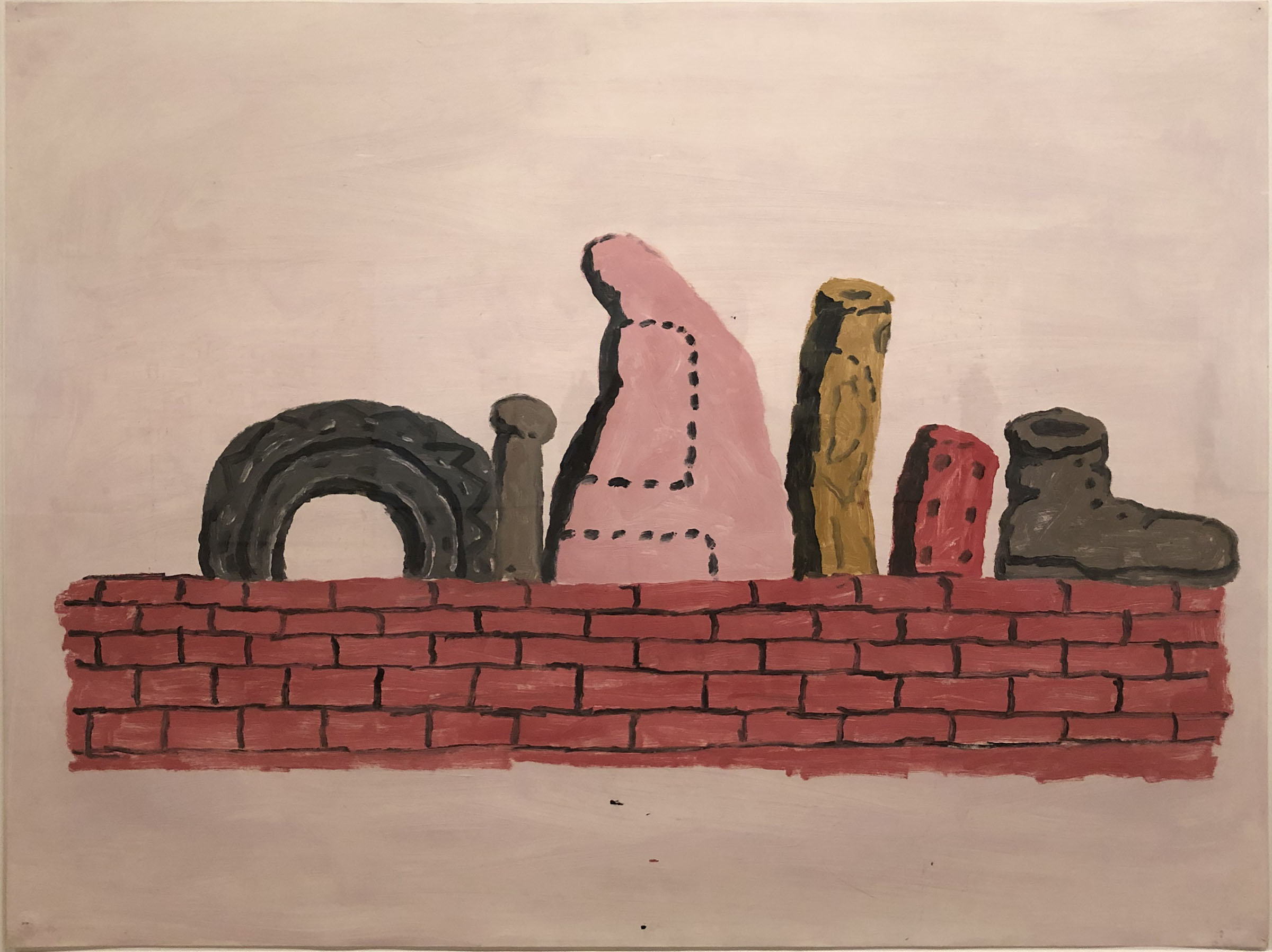