The Greek Underworld at the Getty Villa

There is no holy scripture describing the afterlife beliefs of Greek polytheism. We are left with incidental remarks in epic poetry, stage comedy, and skeptical philosophy. Imagine trying to cobble together American notions of the afterlife from Christopher Hitchens, The Good Place, and Caspar the Friendly Ghost.

That is roughly the challenge the Getty Villa tackles in "Underworld: Imagining the Afterlife." With over thirty objects, it includes major loans from both sides of the Atlantic. Pre-eminent among them is the 5-foot-high Altamura Krater, owned by the National Archeological Museum of Naples and recently conserved at the Getty.

Discovered by 1848 and dated to about 350 BC, the Altamura Krater was found as a pile of fragments and restored long ago. Twenty-first-century science revealed that much of the painted surface is a modern restoration. Regarded as problematic despite its evident importance, the krater has long been off view.
It was never intended to hold water or wine: There's a hole at the bottom. The treatment leaves the painted restorations. Otherwise, much of the surface would be blank, including the central motif of Persephone and Hades in their underworld palace. Digital photos can now indicate to viewers which parts are ancient. The restorations are not complete guesswork. Many lesser vases show similar arrangements of mythic heroes (perhaps all based on a common source, such as a lost wall painting). 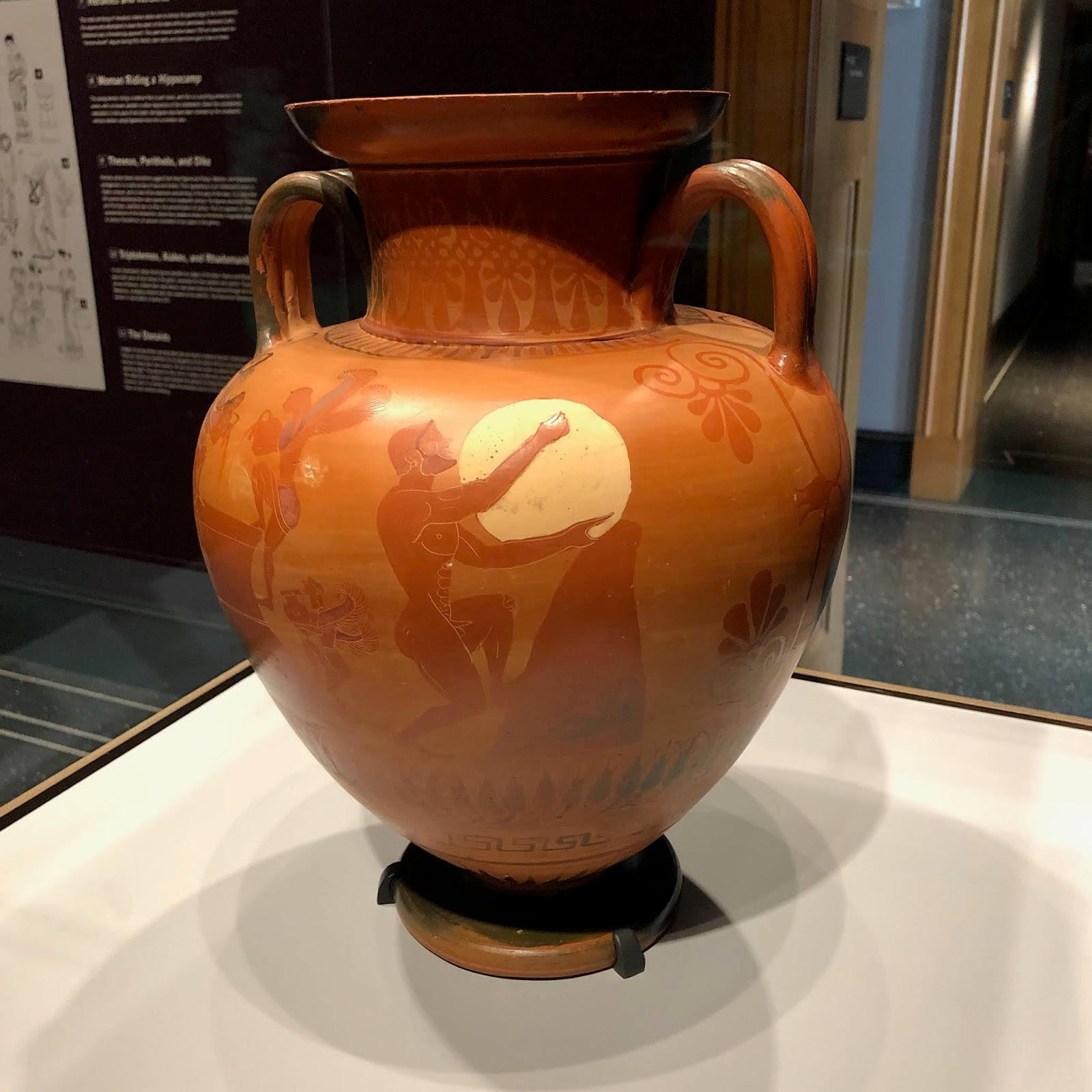 "Underworld" is not just a conservation show. It uses the krater to explore what we know, and may never know, about the Greek afterlife. In ancient texts the afterlife is typically described as a dark, joyless half-existence. It could be worse for those who got on the wrong side of the gods. The Altamura Krater and a smaller Storage Jar with Sisyphus from Munich (above) feature Sisyphus, condemned eternally to push a stone up a hill. The Munich jar's pale red is described a firing error, but it lends an appropriately other-worldly quality.

The possibility of achieving a more pleasant existence after death was the selling point of the Eleusinian mysteries, which indeed remain mysterious to us. ("The first rule of Fight Club is: You do not talk about Fight Club.") Eleusis ultimately entered the Greco-Roman religious mainstream. Meanwhile smaller cults were built around Orpheus and Dionysus. According to Plato, the former was promoted by "begging priests and seers" who "go to rich men's doors," while the Dionysan cult pitched a hereafter in which "the highest reward for virtue is everlasting drunkenness." 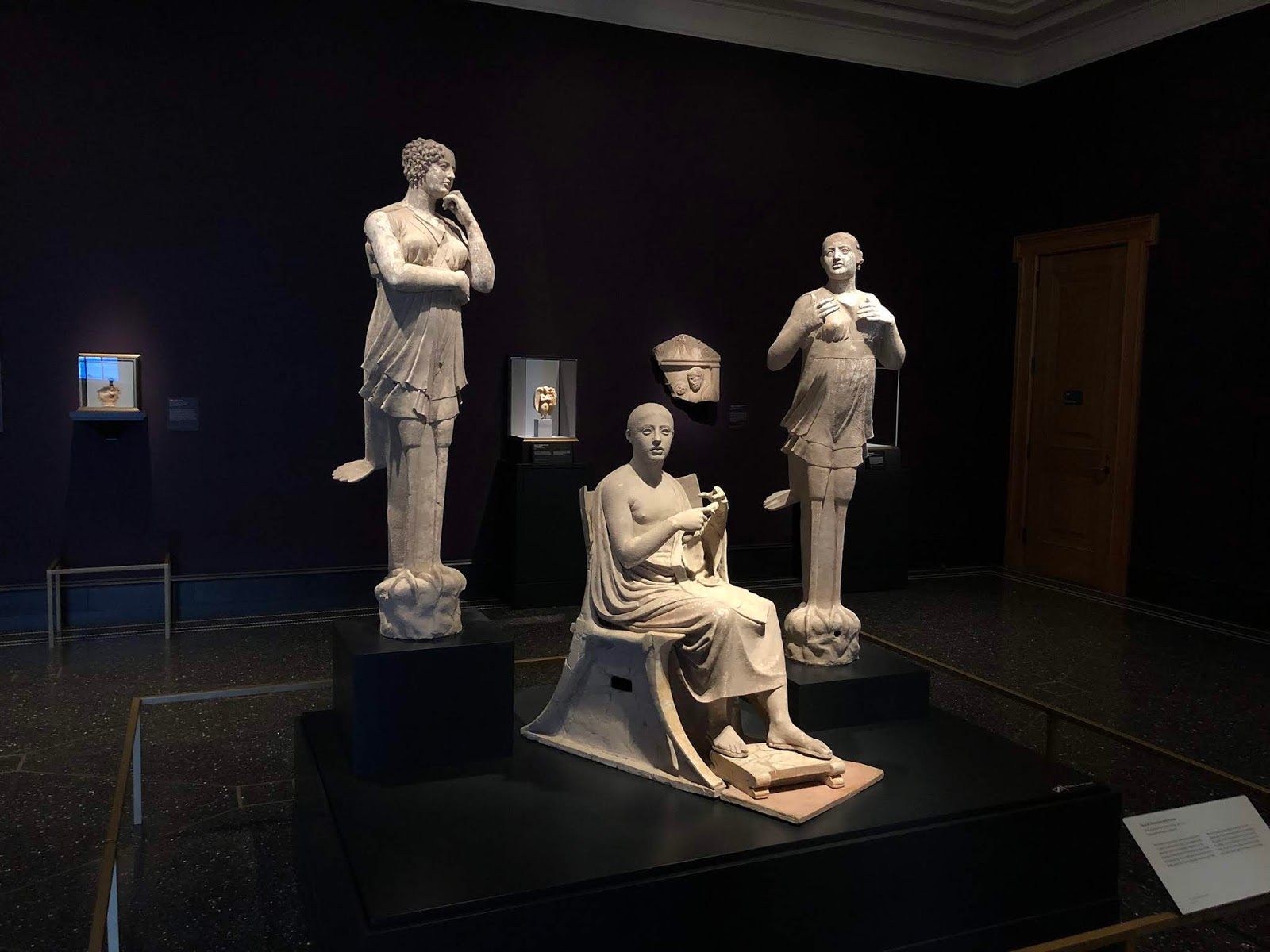 "Underworld" spans rooms anchored by the Altamura Krater, the Getty's fantastic terracotta group Seated Musician and Sirens (above), and objects relating to Eleusis and Dionysus. A hall displays three so-called Orphic tablets in gold foil. They offer turn-by-turn navigation to the Good Place.

The juxtaposition reveals that directions are alarmingly contradictory. Go until you see a spring near a white cypress…

Getty tablet: Then drink from me, the ever-flowing spring.

British Museum tablet: You should not even come near this spring! 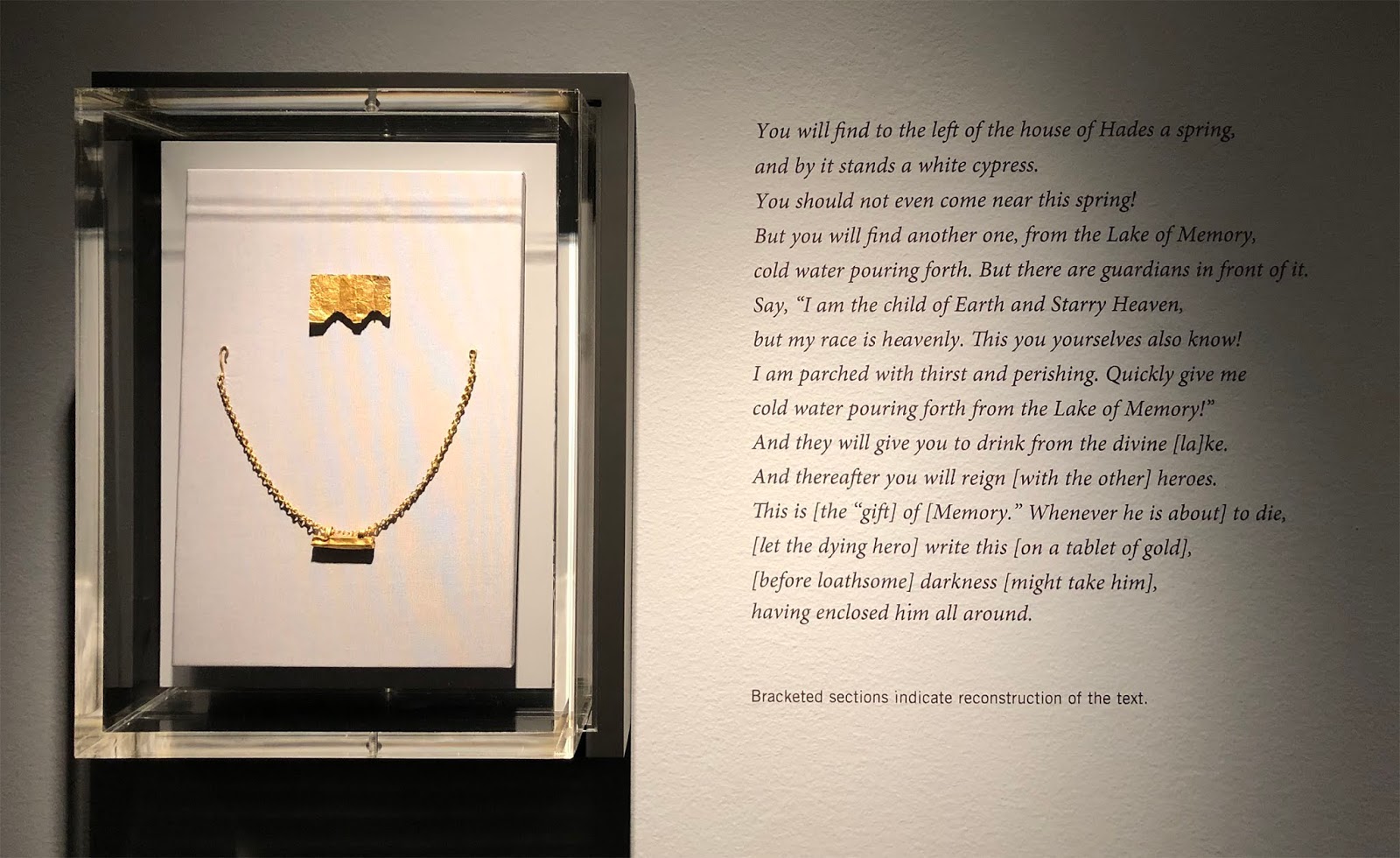