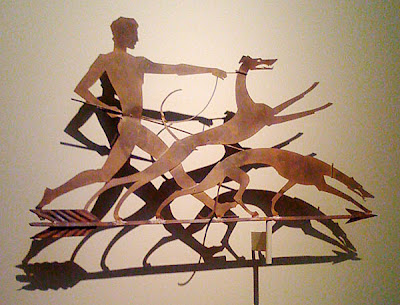 May was a big month for American art. In Los Angeles, the news was the reopening of the Virginia Steele Scott Gallery of American Art at the Huntington. Christopher Knight writes that the Scott Gallery collection "doesn't yet warrant all that space." With doubled space, the average quality level has gone down. That much is simple math. The real question is, what should the Huntington be buying? It is competing with all those other American wings out there, including the one Alice Walton is building with Wal-Mart billions. "Why not let loose?" Knight asks. "Rather than another cartoon-like Thomas Hart Benton from the 1920s… it would be great to see a Henrietta Shore floral, a Modernist pastoral landscape by Charles Reiffel and transcendental abstractions by Raymond Jonson and Agnes Pelton from the same period… The Huntington needs to shake things up." (Above: Wilhelm Hunt Diederich's art deco weathervane).
Pittsburgh-born Virginia Steele Scott was heir to her father's electrical motor fortune. She studied play writing at Yale and spent much of her youth abroad. In Florence she met Jonathan Scott, a minor British painter. They married and moved to Pasadena. Virginia financed restoration work in Venice — the one in Italy — and was a major supporter of the Pasadena Art Museum, contributing to its curious building (now the Norton Simon Museum).
Scott wasn't particularly a collector of American art. Her tastes spanned German Expressionism, Sir Jacob Epstein, and Foujita cat paintings. These interests did not align too well with those of the Pasadena Museum, fixated on Marcel Duchamp and Andy Warhol. Scott's health began to fail, along with her mind. In 1973 she called workmen out to her home in a fashionable part of Pasadena and instructed them to build an underground museum in her back yard. Scott was not the sort of person to worry about zoning. Even as the subterranean gallery neared completion, Scott spoke of giving half her art trove to the National Gallery, Washington. Scott's private museum was completed in late 1974 and never opened to the public. Nor did Scott put her verbal pledge to the National Gallery in writing. She died the same year as J. Paul Getty (1976), leaving a will about as vague.
The Scott Foundation trustees found themselves with an illegal museum on a residential street, with parking for about two cars. The collection was a mixed bag even by the standards of L.A. vanity museums. The trustees decided to sell almost everything and start over.
A group of California paintings, including work by Mr. Scott, were donated to the Laguna Art Museum. The foundation concentrated on forming a reasonably coherent collection of American art from colonial times to early modernism. In the late 1970s, this art was relatively inexpensive. American scene painter Millard Sheets and UCLA art historian Maurice Bloch were tapped to use the Scott money to buy about 45 American paintings and a few watercolors. This included nice representative pieces by Mary Cassatt (Breakfast in Bed) and Edward Hopper ( The Long Leg).
The Scott Foundation came to an agreement with the Huntington to donate the art and construct a new facility to show it. The original building by Paul Gray was introduced in a 1984 brochure as "a handsome example of 'post modern' architecture." (Yes, the Huntington going PoMo was like the school principal rapping a Kurtis Blow rhyme. The new Scott Gallery brochure identifies the Gray building as "neoclassical.")
Over the years, the Scott money bankrolled such key purchases as Church's Chimborazo, Harnett's After the Hunt, the Greene and Greene room, and the Hosmer Zenobia in Chains. As the collection grew, the Huntington raised money for an expansion by Frederick Fisher (described as "modern classical.") The Fisher addition, named for museum patrons Lois and Robert F. Erburu, originally housed British art while the Huntington mansion was being refurbished. My reaction at that time was that the grand-manner portraits fit Fisher's rooms perfectly. I was afraid the American art would lack the proper scale.
As installed by curator Jessica Todd Smith, the art fills the space well. Furthermore, the Scott Gallery now feels like a real museum rather than a Timken Museum-like folly. It's bigger than LACMA's downsized American galleries and offers a substantial chronological survey from about 1700 to 1980. The three big twentieth-century rooms are a revelation. One wall puts two Edwin Dickinsons next to a Charles Sheeler — a precisionist v. imprecisionist smackdown you won't find anywhere else. 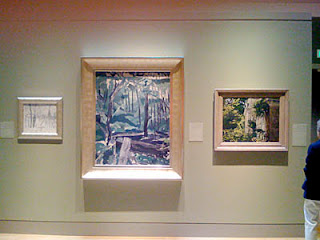 But where is the collection going? There's no Thomas Cole, nor a Winslow Homer painting. This hampers any comprehensive presentation of nineteenth-century painting. In 1998 Bill Gates paid over $30 million for a rather dull Homer. Even Alice Walton had to settle for a small Homer genre scene.
Well, there's always the twentieth century. The Huntington has pushed the chronology up to Sam Francis. Given that a single Rothko can sell for more that would have been paid for all the art in the Scott Gallery, there's not much hope of ever assembling a complete set of American modernists, barring a miracle.
That's okay. American museums have always accepted that they have to tell the story of European art without Michelangelo. You get past that and do what can be done.
If you look at what American works the Huntington has bought since 1984, several trends are apparent.
• The best acquisitions were funded wholly or partly by the Scott Foundation and must have been expensive. No surprise there. 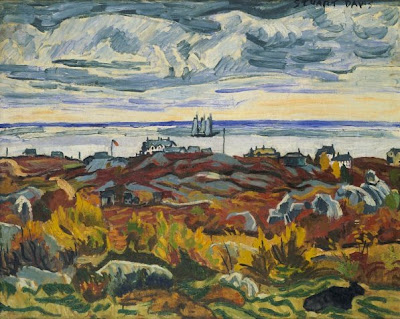 • There's also been a pattern of buying minor (obviously: "affordable") works by big names. The new Thomas Hart Benton falls into that category or ventures dangerously close to it. Another example is the very early Stuart Davis Gloucester Landscape. It dates from 1919, which is to say, before Stuart Davis became Stuart Davis. It would appear they were more concerned with crossing a name off the shopping list rather than with quality or interest. In fact, it's hard to imagine how any major museum would show Gloucester Landscape, except as part of a most hagiographic Stuart Davis retrospective. (The Huntington is showing it now, of course, as their one and only specimen of Davis' art.) 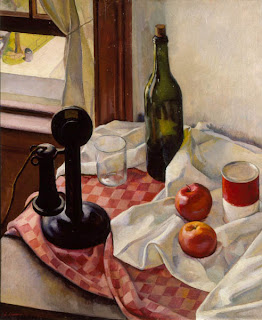 • Every now and then the Huntington does shake things up. That's the good news; the bad news is that their taste in underappreciated artists can be downright odd. Example: Still Life with Telephone by Luigi Lucioni (1926). It's a likeable conservative picture by an artist who once had a certain renown. Lucioni was the youngest artist ever (age 31) to have a painting purchased by the Metropolitan Museum of Art. I doubt the Met has shown its Lucioni this century, or in the latter decades of the last. Consider how much space the Met has for American art. If the Met can't find room for Lucioni, how much wall space does he merit in the Huntington's more abbreviated presentation?
The Huntington's buying reflects the inevitable economics and psychology of collector's councils. Ideally, a museum would bank the annual contributions and buy something really special maybe every ten years. But patrons aren't going to donate unless they can see where their money is going to go. This tends to result in buying minor pieces by safe names or safe pieces by nobodies (rather than a first-rate Raymond Jonson, which would be swell).
Email Post
Labels: Alice Walton Charles Sheeler Huntington Library Jessica Todd Smith Luigi Lucioni Raymond Jonson Stuart Davis Virginia Steele Scott

Anonymous said…
The American art collection at the Huntington just turned 25 years old, yet is one of the most comprehensive displays of American art west of the Mississippi. I doubt the Huntington thinks that they have "checked a box" with their recent purchases of Davis and Benton; instead they have signaled their serious interest in early 20th-century painting. Who knows what will come over the next 25 years to fill in gaps created by the early Benton and Davis, and a late Sam Francis?
June 12, 2009 at 11:55 PM