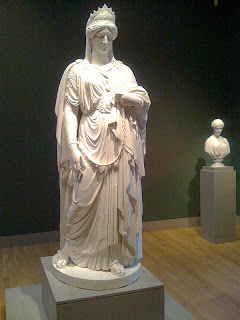 American sculptor Harriet Hosmer is having a moment. Her Zenobia in Chains, unseen by the public since the 1860s, just went on view at the Huntington's Virginia Steele Scott Gallery of American Art in San Marino. Later this week, the Brooklyn Museum's Elizabeth A. Sackler Center for Feminist Art opens "Harriet Hosmer, Lost and Found." It's not a Hosmer show per se but rather a conceptual catalogue raisonné. Artist Patricia Cronin researched Hosmer's oeuvre and made black and white watercolors of each sculpture, even lost works known only from verbal descriptions. The Brooklyn Museum will be displaying Cronin's watercolors, and the "catalogue" has just been published in book form by Charta Press.

This isn't the first creative reimagining of Hosmer's life and work. In 2006 Carole Simmons Oles published a book of poetry, "Waking Stone: Inventions on the Life of Harriet Hosmer." Can an indie film be far off? Hosmer ran with a bohemian crowd of lesbian intellectuals in Rome, and a biopic would include such plum roles as Nathaniel Hawthorne, George Sand, Bertel Thorvaldsen, Robert and Elizabeth Barrett Browning, and Henry James (as the lesbian-phobic frenemy?)
Email Post
Labels: Brooklyn Museum Harriet Hosmer Huntington Library Patricia Cronin