Big Scary Vase at the Getty 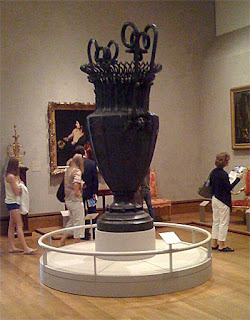 The Getty Museum is displaying a monumental bronze vase by French Symbolist sculptor Jean-Désiré Ringel d'Illzach, a loan from a private collection (unidentified: aren't they all?) The attached photo gives you some notion of its scale but nothing of its incredible decoration. The surface is modeled throughout with spiderwebs, bats, peacock feathers, juniper branches, and masks, all in ink-black patina. A flotilla of snails slime their way up onto the base. Des Essaintes must be crushed he didn't have this for his black party. Set designers for the next Addams Family vehicle, take note. 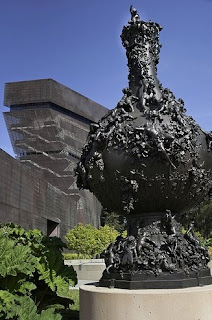 Big bronze vases are part of the forgotten story of French sculpture in the quote-unquote Impressionist age. The Fine Arts Museums of San Francisco owns an 11-foot-tall Gustave Doré Vintage Vase encrusted with an orgy of bacchic figures in bronze. Modeled in 1878, it was hawked at international expositions on two continents, descending to the most provincial California Midwinter Fair of 1894-5, held in San Francisco. A yokel by the name of M.H. de Young bought it and gave it to a museum that bears his name. It is now displayed outside the stunning Herzog & de Meuron building, a prime location that nonetheless raises the question of just how much the current Fine Arts curators value it, conservatorially speaking. (Flickr photo by Greatest Paka Photography.)
The Ringel d'Illzach vase at the Getty demonstrates that the vase form survived into the last years of the century. Its date, 1889, is practically the Symbolist summer-of-love (the Getty's Ensor painting is titled "Christ's Entry into Brussels in 1889"). Like Doré, Ringel d'Illzach is best known for small-scale works. In 2006 LACMA bought two of his ceramic sculptures of goblins. LACMA's underappreciated collection of medals includes a Ringel d'Illzach portrait of that quintessential—and gothic—American author, Nathaniel Hawthorne.
Email Post
Labels: de Young Museum Getty Museum Gustave Doré Jean-Désiré Ringel d'Illzach LACMA Nathaniel Hawthorne