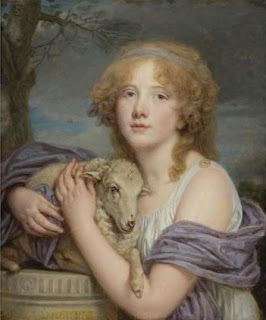 LACMA hit the jackpot with its auction of 17 European paintings at Sothebys New York. All but three sold, with many doubling or tripling their estimates. The highest prices were for the De Hooch ($1.65 million), Ter Borch ($1.59 million), and Rubens ($842,500). Even if the estimates were conservative, this proves that someone is still buying third-string old masters. Perhaps most surprising was buyer enthusiasm for Greuze's creepy Girl With Lamb and a portrait of a mother and two children merely attributed to the forgotten name of Gaspar de Crayer. The Greuze, a quintessential example of the Hearst-Marion Davies taste, went for for $182,500 (estimated $60,000 to $80,000) and the questionable de Crayer sold at $254,500, over four times its low estimate. According to the figures on the Sothebys site, the total of the LACMA paintings, including buyer's premiums, came to about $5.8 million.
Email Post
Labels: deaccessioning Gaspar de Crayer Jean-Baptiste Greuze LACMA

Unknown said…
Maybe LACMA will surprise us and buy something extraordinary with its $5,000,000. But in today's market, that might buy one great picture (but no Rembrandt, Vermeer, or Poussin). But would even one great picture make up for the loss of the de Hooch, ter Borch, or Steen?
June 5, 2009 at 10:48 AM

Anonymous said…
Sad to hear. Why would they deaccession a very nice ter Borch? Just a few days ago I was checking out the rehang and wondering where the picture was...
July 1, 2010 at 10:13 AM