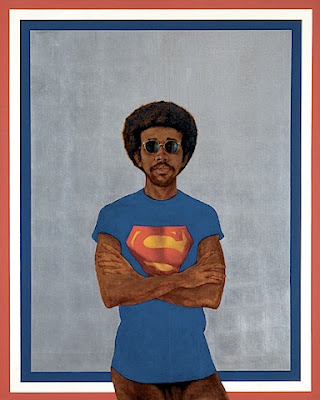 How do you explain who Barkley L. Hendricks is to a moderately art-savvy friend who doesn't know who he is? You probably say something like, "He did these swagger portraits of black people in the 1970s, in a kind of European old master style." Second question: "You mean like Kehinde Wiley?" One might add that many of Hendricks' signature works predate Wiley's birth (1977), but that's not quite the point.
"Barkley L. Hendricks: Birth of the Cool," now at the Santa Monica Museum of Art, should if nothing else help to disambiguate future Wikipedia entries. The show casts Hendricks in the context of minimalism: the grounds are no less important than the figures. (Above, Hendricks' 1969 Icon for My Man Superman (Superman never saved any black people — Bobby Seale), a self-portrait.) 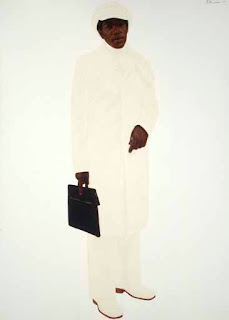 As seen here, Hendricks' work is both very political and very formal. A mash-up of Glenn Ligon and Alex Katz might evoke him better than Wiley's baroque postmodernism. Dr. Kool (left) exemplifies the current taste for Hendricks. In the New York Times, Ken Johnson links such paintings to Malevich's White on White, and in the L.A. Times, Christopher Knight finds parallels to the contemporary fashion photography of Avedon and Penn. 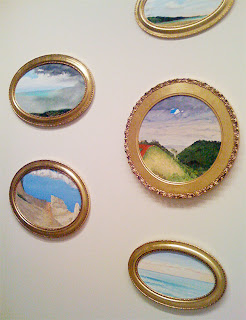 Hung salon style on a far wall are the artist's relatively unloved post-2000 landscapes. Hendricks makes the Jamaican landscape both recognizable and alien, after the fashion of the c. 1800 oil sketches that have been the rage lately. The only false note might be the frames—too Kehinde Wiley?
Email Post
Labels: Barkley L. Hendricks Kehinde Wiley Santa Monica Monica Museum of Art