It's anyone's guess whether the plunging securities market has quelled the Getty's buying for now or forever. The museum at the Getty Center continues to attract impressive loans, though. Two Rembrandt paintings have recently gone on view, a Saint Bavo from Gothenburg, Sweden, and a Portrait of a Rabbi from a New York private collection. Add that to the 1632 Portrait of a Girl Wearing a Wide-Trimmed Cloak (below) that's been on long-term loan, and the four Rembrandt paintings the Getty owns. That comes to seven Rembrandts in one room, something you won't otherwise find outside of the East Coast and Europe. Two qualifications: all are smallish, and the Getty paintings outshine the loans.
Saint Bavo appeared alongside the Getty's Saint Bartholomew in the 2005 exhibition of "Rembrandt's Late Religious Portraits." Getty conservator Mark Leonard has since freshened up Bavo. Dammit, Jim, he's a conservator, not a magician. The result is still very dark and hard to read. (No .jpg seems to do it justice). The jury's out on whether Bavo is completely autograph.
The small Portrait of a Rabbi, said to be from the early 1640s, is an key precedent for the broad-brushed holy men of the 1660s. It is not well known, suggesting that the attribution may be tentative-ish? 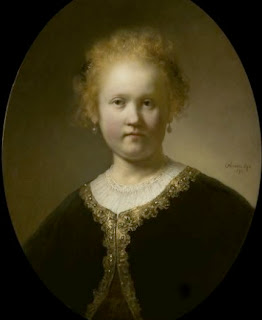 To us in the casual-everyday 21st century, the 1632 Girl Wearing a Wide-Trimmed Cloak looks like a formal portrait. It's not; it's a tronie, a painted tribute to a memorable face in which the sitter perhaps couldn't afford the clothes she's wearing. Rembrandt used the subject as a model for Europa and her attendant in the Getty's Abduction of Europa. For more, see the lavish Rembrandt in Southern California site.
Email Post
Labels: Getty Museum Rembrandt

Anonymous said…
"Girl Wearing a Wide-Trimmed Cloak," I swear to God, is Susan Boyle. Who knew Rembrandt had such prohectic powers?! Cheers to the Getty for helping to keep Ms. Boyle in the public eye!
June 21, 2009 at 10:35 PM