With "Your Bright Future: 12 Contemporary Artists from Korea," the subtitle says it all. It's an informative core sample of the Korean scene. Pro: That LACMA is interested. Con: It's not a show you'll leave humming the curatorial tune.
• This is BCAM's second big exhibition on the second floor. "Two Germanies" almost demanded a second visit to take in properly. This show, you can do in an hour (it's heavy on room-gobbling installations).
• So much for connoisseurship. The first two works you'll see are outdoor extravaganzas. I had mentally assigned them to the Master of the Cool Plastic Installations (below, left) and the Pseudo-Christo (right). It turns out they're one and the same artist, Choi Jeong-Hwa. 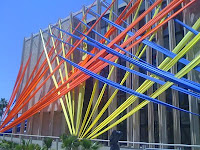 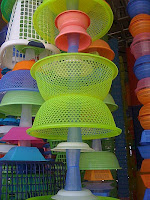 Choi is the Korean Koons, more or less, and one of the best-known artists in the show. Still, the curators might have helped Choi's American reputation immeasurably by skipping the Ahmanson wrap. (In the L.A. Times, Christopher Knight rates Choi's bad self worthy of a Hyundai showroom.)
• Inside, the show starts with a bang, two pieces by Do Ho Suh. Both merge his childhood home in Korea with his New York apartment. Do you prefer the "Carole and Barry Kaye Museum of Miniatures" version, or the MOMA one? (Incidentally, they aren't showing LACMA's rather marvelous Suh, Gate.)
• You'll probably miss one of the strongest works in the show. It's Koo Jeong-A's Mountain Fundamental (top, a suggestive detail). A table at just below average-adult eye-level holds tiny piles of sanded stone, forming a mountain landscape that is a simultaneous homage/burlesque of the Korean, after Chinese, ink painting tradition. You'll miss it because it's the only "Bright Future" work on BCAM's first floor, in one of the rooms holding a ginormous Richard Serra sculpture. The room is about 10,000 square feet. The Koo sculpture occupies 5 square feet. Anybody's guess why they had to bump it down here? The show's other Koo is a wall projection that eats up, oh, maybe 80 square inches of wall space. Everybody else gets massive rooms. What is Koo, chopped liver?
• Speaking of Serra. The LACMA website is running a Young-Hae Chang Heavy Industries animation as its splash screen. It's not a bad thing but it keeps you from getting where you want to go — shades of Tilted Arc… Anyway, Young-Hae Chang Heavy Industries is an inspired collaborative (of Young-Hae Chang and Marc Voge) that also gets short shrift in this show. The good news: If you're reading this, the whole YHCHI oeuvre is a click away. It's as good a show as "Bright Future," and you're the curator.
Email Post
Labels: Choi Jeong-Hwa Koo Jeong-A LACMA Young-Hae Chang Heavy Industries