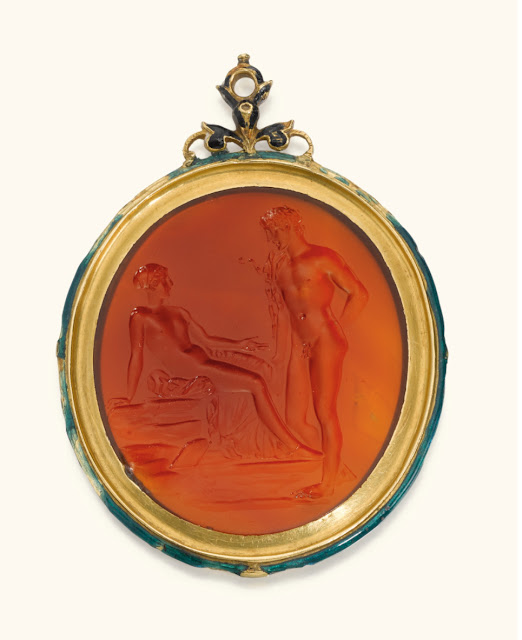 The Getty Museum has announced a group of recent acquisitions. Among them is an exceptional Roman gem that Adolf Hitler swiped from a Jewish art dealer in a forced sale. Restituted this year to the heirs of Kurt Walter Bachstitz, the gem ignited a bidding frenzy at a Sotheby's London sale this Dec. 6, going for 40 times estimate (£398,750, or a bargain $494,000 thanks to Brexit).
Identified as an Intaglio with a Standing Youth Conversing with a Seated Maiden, of the first-century BC, the gem's provenance is distinguished, notorious, and ironic. In the 19th century, it was owned by John Winston Spencer-Churchill, granddad of Winston Churchill. Hitler obtained the gem in 1941 and transferred it to his vanity museum foundation. In a Man in the High Castle multiverse it would now be in the Fühermuseum, Linz. In reality, Monuments Men recovered the gem and left the Dutch government to decide what to do with it. Until recently it was in the Dutch National Museum of Antiquities, Leiden. This year the heirs of Bachstitz succeeded in having it restituted, and the family put it up for auction.
The gem is sard, a reddish form of chalcedony, and large for a well-preserved ancient gem, being 1-1/4 inches high. The gold mount dates from the 18th century. Numerous identifications for the nude figures have been proposed over the years. The Getty press release favors Aphrodite and Adonis. Sotheby's catalogued the gem as "superlative"… "one of the most beautifully executed intaglios to have been offered at auction in many years." 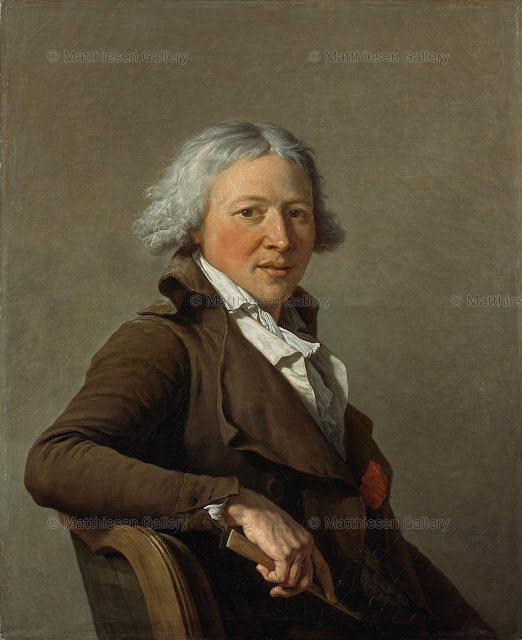 The Getty has also acquired a Portrait of the Sculptor Philippe-Laurent Roland (1797) by François-André Vincent. A rival of David and a friend of the sitter, Vincent showed the portrait at the 1798 Salon. It was sold to the Getty by the Matthiesen Gallery, London and has been on view at the museum for several weeks. Vincent is hardly to be seen in U.S. collections, though LACMA has a finished oil sketch of a history painting.
Also entering the Getty collection are two large 18th-century drawings, a Fragonard Shaded Avenue (c. 1774) and a Francesco Guardi Regatta on the Grand Canal (c. 1778).

Anonymous said…
Dear William, Can you speculate as to why Hitler would have coveted this particular work? Thanks.
December 20, 2016 at 11:11 AM

William Poundstone said…
Hitler was planning "the greatest museum in the world" in Linz, Austria—it was to have contained all the European art he could get his hands on in occupied Europe, from the Ghent Altarpiece to Adolph Menzel (but no "degenerate" modern art!. The Bachstitz gem's figures presumably resonated with the Nazi regime's taste for classicism, expressed in heroic depictions of toned Aryan bodies, nude or with laurel crowns.
December 20, 2016 at 11:37 AM