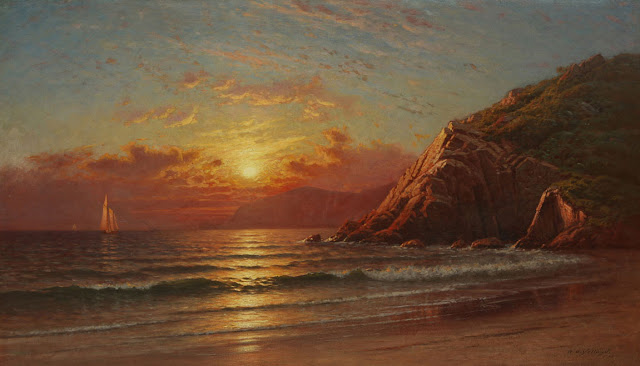 California's brand of Impressionism gets too much attention. No so West Coast versions of Luminism, the mid-19th-century movement exemplified by Fitz Henry Lane's and Martin Johnson Heade's hazy, light-filled, weirdly calm seascapes. The Pasadena Museum of California Art's "In the Land of Sunshine: Imaging the California Coast Culture" is showing a notable Luminist-inspired painting, Raymond Dabb Yelland's Golden Gate from Angels Island (1884). The Golden Gate Bridge would one day be built just about where the sailboat is.
British-born Yelland (1848-1900) studied in New York, did the Paris bit, and then spent most of his career in San Francisco. He was born 44 years after Lane, though he died young, eight years before the last of the major Luminists, Alfred Thomas Bricher. Works such as Golden Gate from Angels Island were about a generation behind the curve of East Coast developments. California's "Impressionists" are 40- to 100-years-and-counting late to the party.
Speaking of that, Yelland did paintings of nearly this same view at different times of day, paralleling Monet's Haystacks and Poplars of the 1880s. In that sense Yelland is the true California Impressionist.
"In the Land of Sunshine" is a mixed bag, sometimes provocatively so. Its title comes from Charles Lummis' booster magazine. Commercial illustration plays a strong role, with works spanning the Auto Club Westways school, Disney imagineering, and surfer-dude psychedelia. But Yelland's painting, installed near the entrance, invites reflection on a Luminist counterpoint to the state's cloudless blue skies. Several Phil Dike paintings of Newport Beach, of all places, are studies of sublime light effects. Best are the smoggy-creepy Quiet Beach and The Pink House (shown). The sun may be a moon—a painted counterpart to cinematography's "day for night." 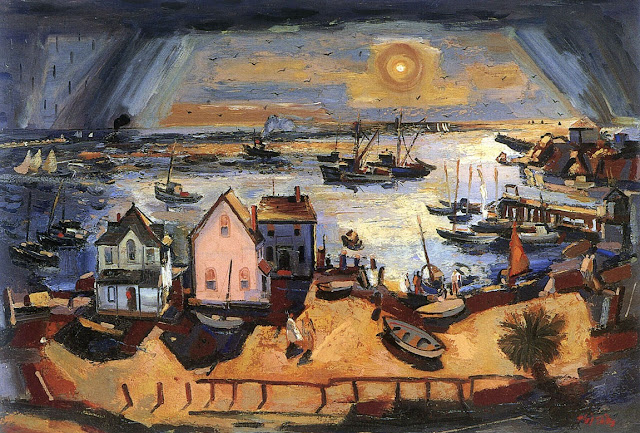