Fate of Lucas Museum Still Up in the Air 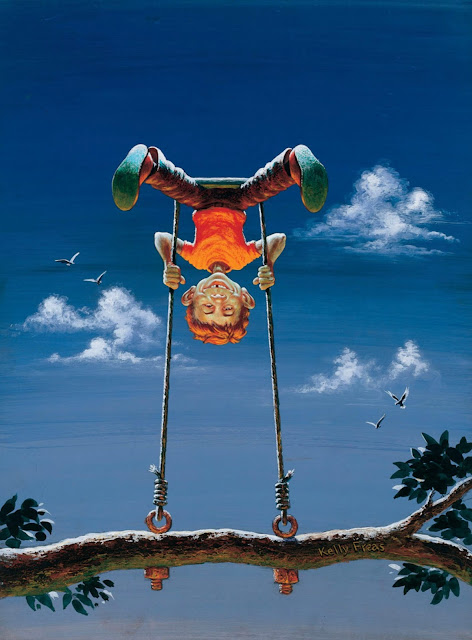 For the second time this month, George Lucas has delayed announcement of which city will be the site of the planned Lucas Museum of Narrative Art. It's now said the announcement may not come until the end of January (shown, a Kelly Freas Mad magazine cover painting from the Lucas Collection).

The delay is puzzling—to me at least—because I never believed L.A. was seriously in the running. Lucas could have established his museum anywhere. He chose San Francisco (in 2013). When that ran into roadblocks, his second choice was Chicago (2014). That fell apart too. Then in 2016 Lucas announced he was considering San Francisco and Los Angeles. Obvious-to-me inference: Lucas was using L.A. as a bluff, a way to warn San Franciscans that this time they'd better approve his plans without any grief. Eli Broad did much the same thing with his museum, negotiating with Santa Monica, Beverly Hills, Culver City, and Los Angeles.

Lucas had architect Ma Yansong produce renderings for the museum in San Francisco's Treasure Island and L.A.'s Exposition Park. Hey, a bluff has to be credible.
San Francisco leadership promptly embraced the new Lucas plans. San Francisco was the No. 1 choice all along—whereas Los Angeles couldn't rank higher than third place in Lucas' estimation. The choice ought to have been a no-brainer.

My reading isn't the media's. In the past week publications from Bloomberg to Los Angeles Magazine to Los Angeles Sentinel have run pieces on the supposedly intense competition between SF and LA for the museum. Most writers seem to take it as a given that Lucas is still deciding which city he wants.

What does the delay mean? I still don't think it means L.A. has much of a shot at being chosen. My best guess is that the Lucas people are still nailing down a very complex deal with San Francisco. They figure they can use the leverage of a plan B a little while longer.
Email Post

Anonymous said…
Not sure if the death of Carrie Fisher may have something to do with George Lucas presumably not wanting to make a bit of commotion in the media at this moment in time.

But if that's not a factor and your assumptions are correct, then he'll be slapping the faces of a good number of people. Among them friends like Jeffrey Katzenberg and other prominent people who've actively expressed support of his museum being in Los Angeles. Folks such as those at AMPAS and USC, and officials of the California African American Museum, the LA Natural History Museum and the County Museum of Art.

Not to mention working-class, non-white, non-Anglo residents in south LA who are aware of talk about his museum being near Vermont Ave and Exposition Blvd, and who'd be able to easily access it if it were there instead of in the bay northeast of San Francisco.

But if his mind is made up, and he absolutely insists on a site of brie-and-latte isolation, he'll come off as surprisingly shallow, vain, two-faced and hypocritical. And oddly foolish too.
January 8, 2017 at 12:03 AM