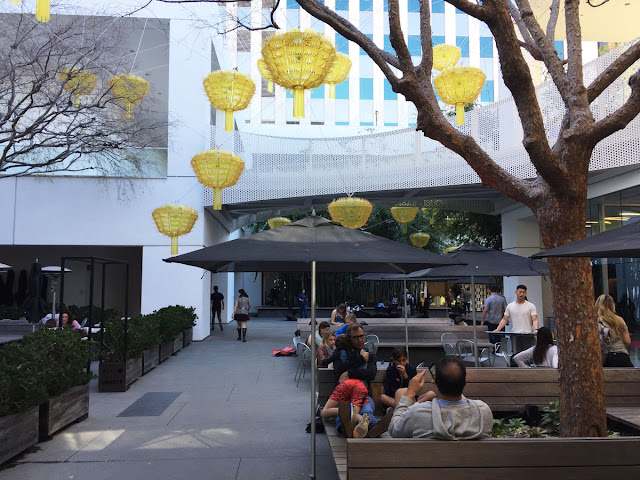 The UCLA Hammer Museum has opened refurbished galleries with a long-anticipated Jimmie Durham show and a major survey of Jean Dubuffet drawings. Equally notable is what's gone: the misbegotten "Vault Gallery."
Armand Hammer decreed a cathedral-like room to show his Leonardo da Vinci codex. Edward Larrabee Barnes supplied one, more or less. In 1994, when UCLA took over the museum, the Leonardo manuscript was auctioned for $30.8 million to Bill Gates. The vaulted gallery was an awkward inheritance, difficult to program with contemporary work. (Shown, Andra Ursata sculptures from a 2014 Hammer Project in the vault gallery. Hammer's dark shrine had become a white oblong.) 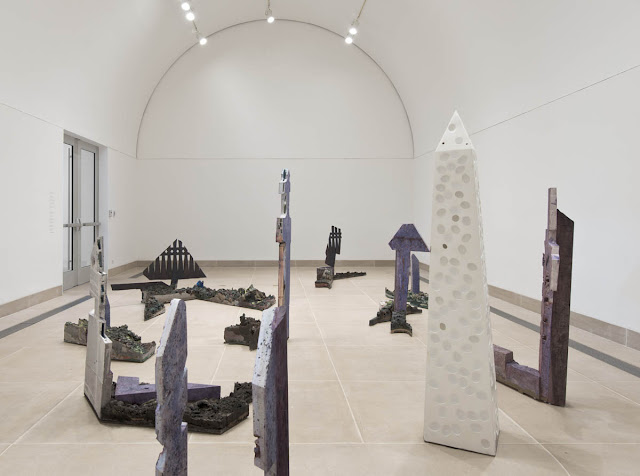 Michael Maltzan's redesign erases the vault, an adjacent lobby, and a dark room for videos. These spaces now flow into the main gallery complex, offering 10,000 square feet of contiguous exhibition space. That number is said to be a rough baseline for many contemporary exhibitions. It's this space that's occupied by "Jimmie Durham: At the Center of the World," which is satisfyingly comprehensive (nearly 200 objects), much-needed, and generally spectacular. It's organized by the Hammer's Anne Ellegood with MacKenzie Stevens. 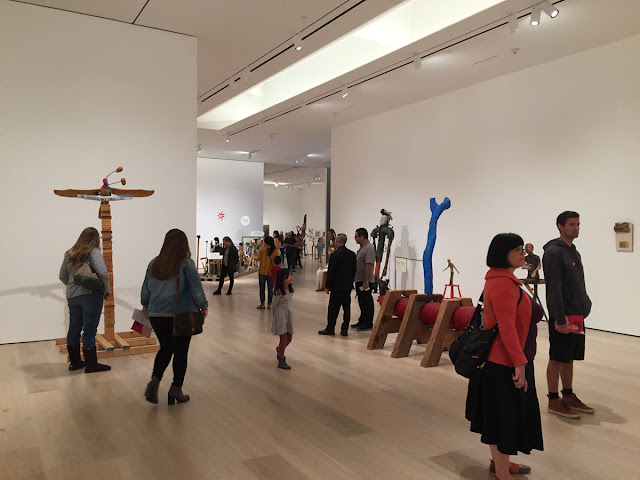 Durham is an artist's artist, Cherokee (allegedly), peripatetic (certainly) and resident in Naples, Italy (currently). His work draws on such traditions as Surrealism, concrete poetry, Native American art/craft/kitsch, African-American assemblage, arte povera, and Fluxus. Durham is that rare case, a visual genius who is also open-mike funny. (For every Jimmie Durham there are a thousand Red Groomses and Jeff Koonses.) 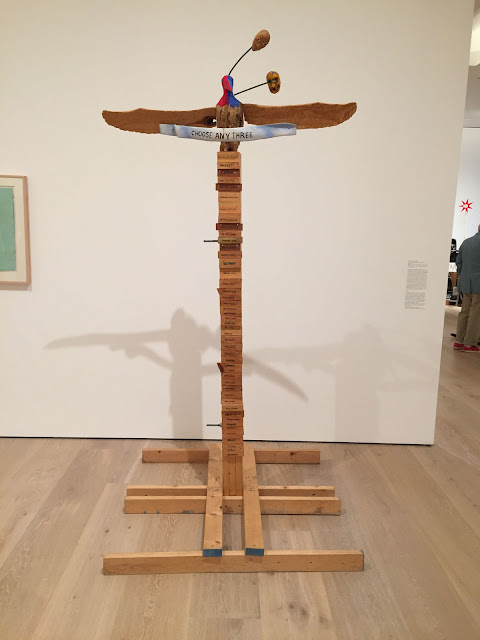 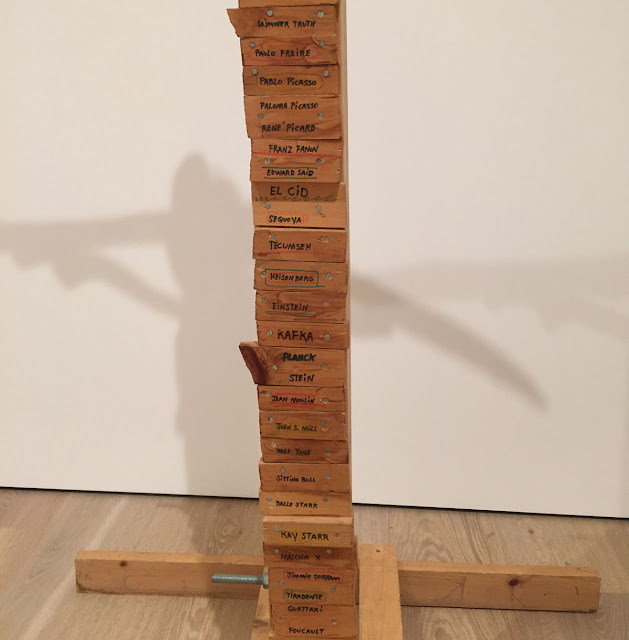 Incidentally, Choose Any Three is one of several pieces the Hammer has acquired from the show. It was purchased with funds provided by Susan Bay and Leonard Nimoy. 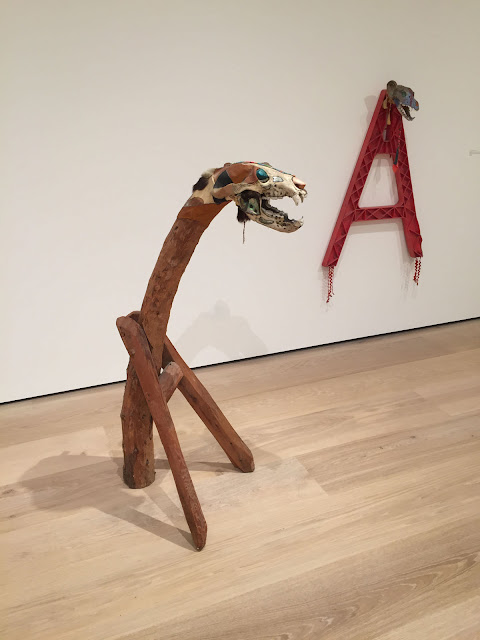 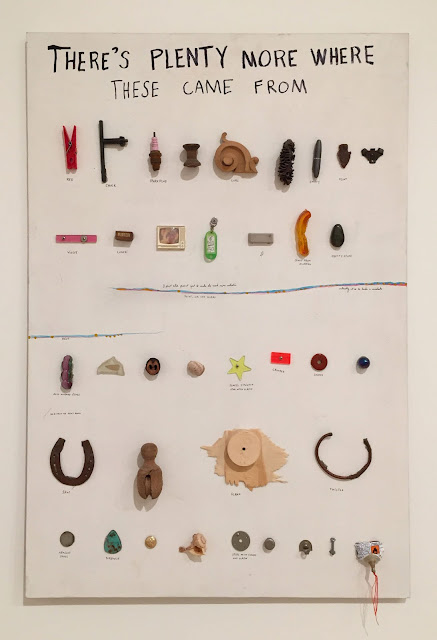 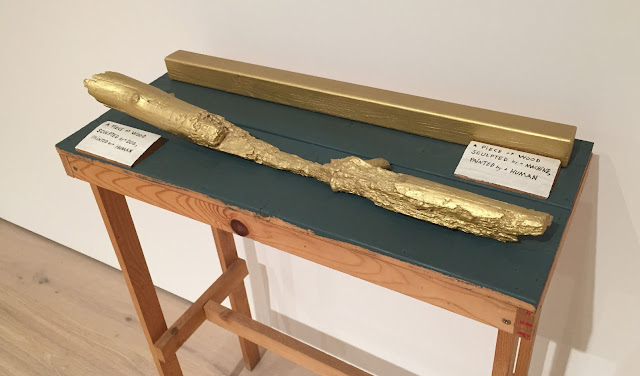 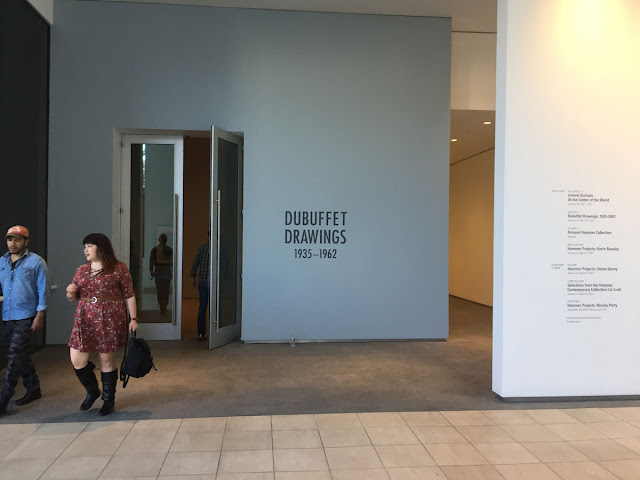 "Dubuffet Drawings, 1935-1962" is a traveling exhibition organized by the Morgan Library & Museum. It also occupies "new" space, formerly offices, at the top of the staircase to the third floor. Before visitors climbed two flights of marble stairs and then had to turn around and figure out which way to go. The new gallery provides an immediate destination. It is ample size, showing about 100 drawings. 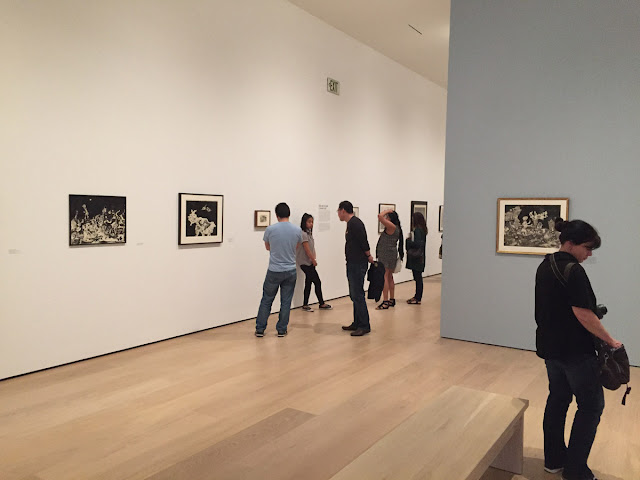 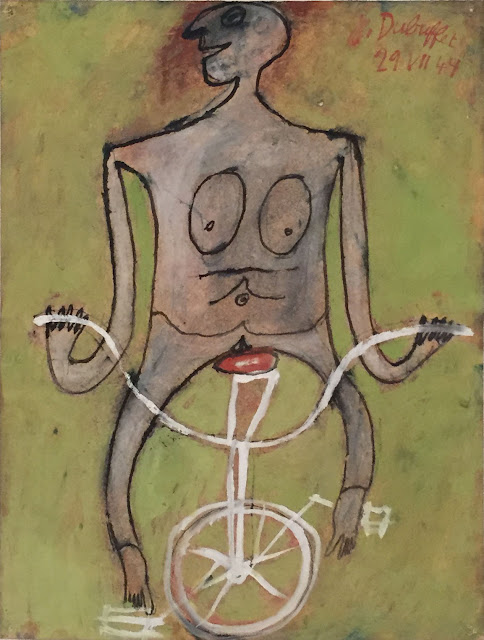 There is a certain rhyme between Dubuffet and Durham, each undermining notions of virtuosity, seriousness, and beauty. I gather this space will primarily be dedicated to works on paper, either loan shows or rotations from the Grunwald Center collection. You don't normally have skylights in galleries for works on paper, but Maltzan has contrived one. It's a "skyspace" closed to L.A.'s searing sunlight. 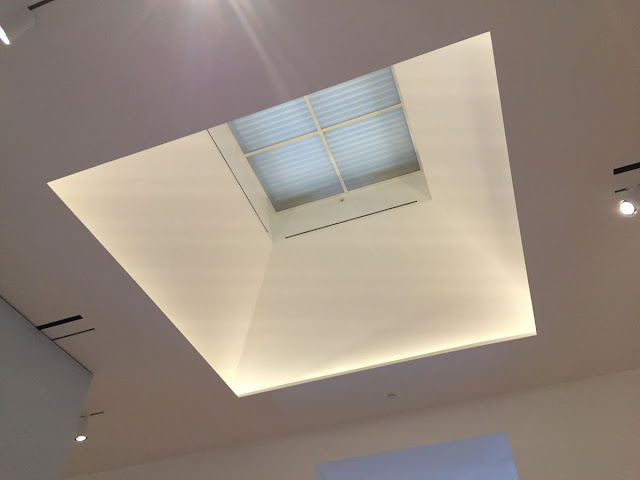 The Dubuffet rooms lead to the space for Armand Hammer's founding collection. It seems to be a little smaller than the space formerly provided, but if so, then less is more. Hammer's collection has five deliriously great paintings (two Rembrandts, Gustave Moreau's Salomé, van Gogh's Hospital at Saint-Rémy, and John Singer Sargent's Dr. Pozzi.) They're all on view, four of them occupying free-standing walls. This sets up an unlikely conversation (the Doctor, the Burgher, and the Madhouse), but it works because of the sheer force of paintings involved. The outside walls of the square room hold the supporting cast. It's an effective resolution to a difficult problem. 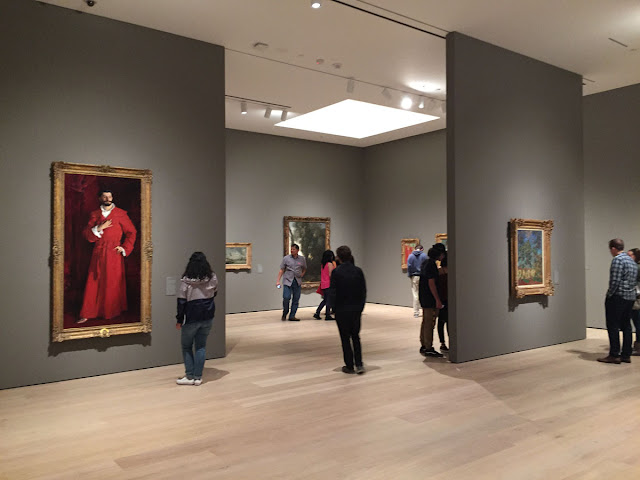 There's more. The museum's first floor is showing three Liz Craft pieces from the Hammer contemporary collection. The second floor has a a bitcoin-inspired second-floor installation by Simon Denny (and the public courtyard, which seems livelier than ever). 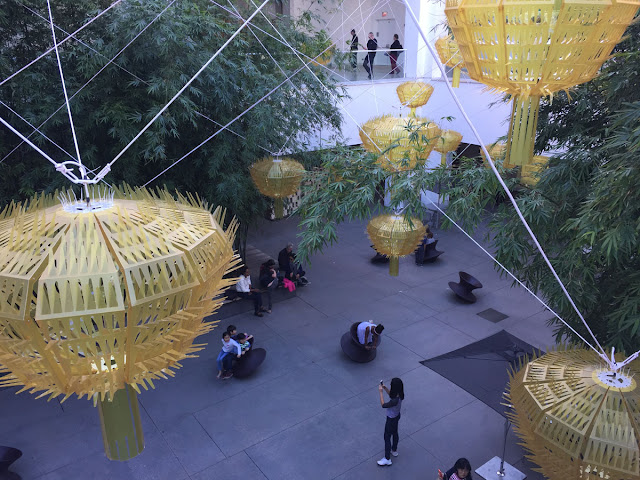 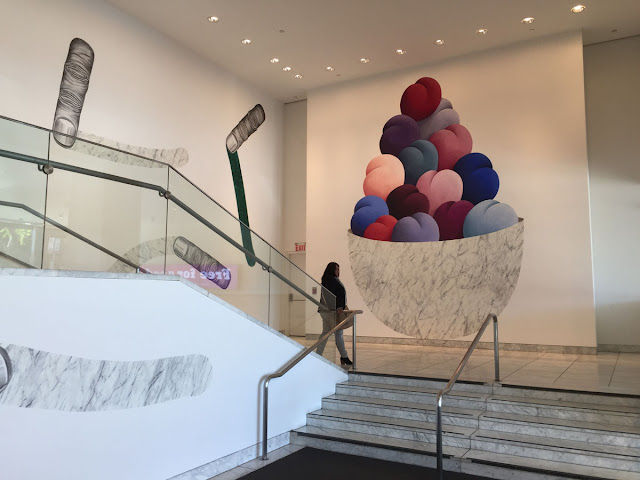 Finally, there's a staircase mural by Nicolas Party. The artist recoils at the expanse of Trumpian marble as a space for contemporary art. This staircase is slated for changes too. Last week the museum released renderings for a future "transformation" by Maltzan. It would give the museum a solid block of Wilshire frontage, with a prominent corner entrance on Westwood Blvd. The bookstore would occupy the second story. Armand Hammer's carrara marble and chrome will be replaced with warmer materials. The museum is projecting this for "by the year 2020." 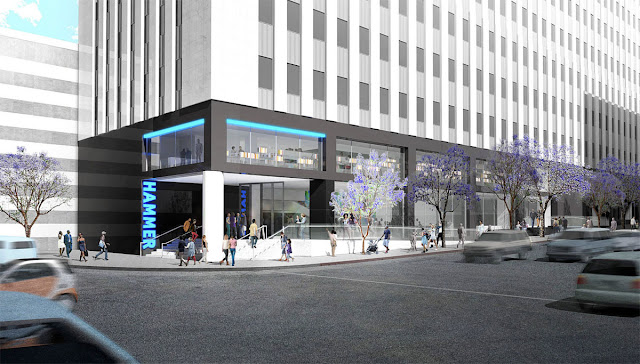 Anonymous said…
The sale of the da Vinci work still irritates me. It struck me as an oddly greedy, shortsighted, arrogant way of managing the Hammer.

The late Henry Hopkins should be resurrected and publicly flogged.
January 31, 2017 at 1:00 AM

zerry ht said…
Wow!! This is really awesome and art work is honestly great and looks stunning. Wish could attend such event in future. Got to know from my friend that an art exhibition will be held at one of Chicago event space. Will be definitely going there with her.
May 29, 2017 at 12:20 AM