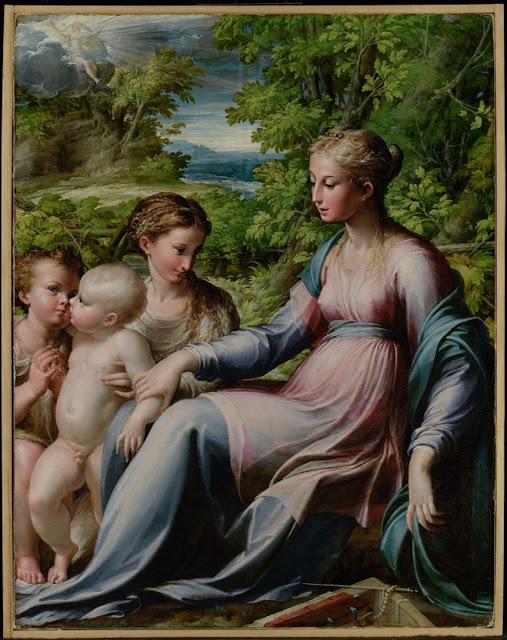 The joke is that art history progresses through funerals. This is especially true of attributions. At any given time, there are only a few scholars qualified to offer opinions on whether an object is by the hand of a great historical artist. Consensus is subject to the volatility of the actuarial table. A case in point is Parmigianino's Virgin with Child, St. John the Baptist, and Mary Magdalene (1530s), the spectacular Renaissance painting the Getty Museum has just acquired.

A 1788 Christie's auction catalog described the painting as "One of the finest Pictures in Europe… and ever esteemed the most capital picture of this great master."

It was that until a 20th-century connoisseur decided it wasn't a Parmigianino, or all that.

"Parmigianino" is a diminutive of the artist's home town, Parma. Translation: "Lil Parma." He became the second great painter of the Emilian school, succeeding Correggio. In his Roman heyday, Parmigianino was hailed as the new Raphael. The artist died young and crazy, and his works are rare. Last August the Getty offered $31 million to buy Virgin with Child, probably the artist's last masterpiece in exportable hands. 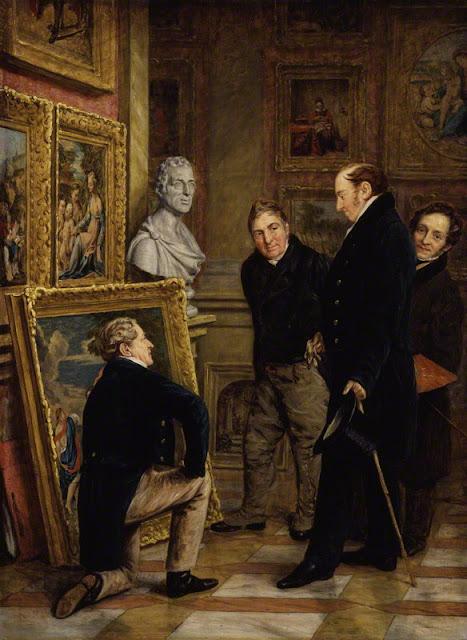 Virgin with Child was documented in Rome's Barberini collection by 1644. For the past 250 years it's been in a succession of British collections. Onetime owner George Watson Taylor appears in Peter Christoffel Wonder's Patrons and Lovers of Art (c. 1826-30). Taylor kneels next to Titian's Bacchus and Ariadne, now a prize of the National Gallery. Above his head is the Getty's Parmigianino. Dimly visible at upper right is Raphael's Alba Madonna. The Parmigianino is the most legibly depicted of this rarefied group. 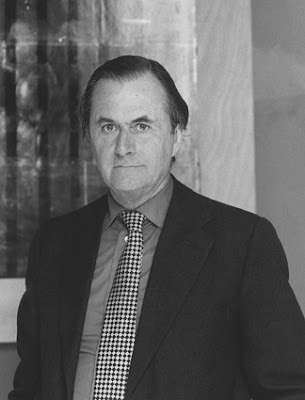 In 1832 Taylor sold the Virgin with Child to James Morrison, not to be confused with the L.A. rock star. Morrison's collection passed by inheritance to the Dent-Brocklehurst family and is shown at Sudeley Castle. In recent decades the Castle's art has been sold to pay upkeep. The Dent-Brocklehursts sold Poussin's Landscape with a Calm to the Getty in 1997, and they were also the seller of the Parmigianino.

The latter's attribution had been challenged however. Cecil Gould (1918-1994, left), was a British spy, Monument Man, art historian, and Keeper of the National Gallery. Gould wrote definitive monographs on Correggio and Parmigianino. His influence was unparalleled. Gould advised the London National Gallery on acquisitions, recommending its 1974 purchase of Parmigianino's The Mystic Marriage of Saint Catherine (c. 1530, below). Gould judged the Sudeley Castle Virgin with Child to be by Parmigianino's cousin by marriage, Mazzola Bedoli. 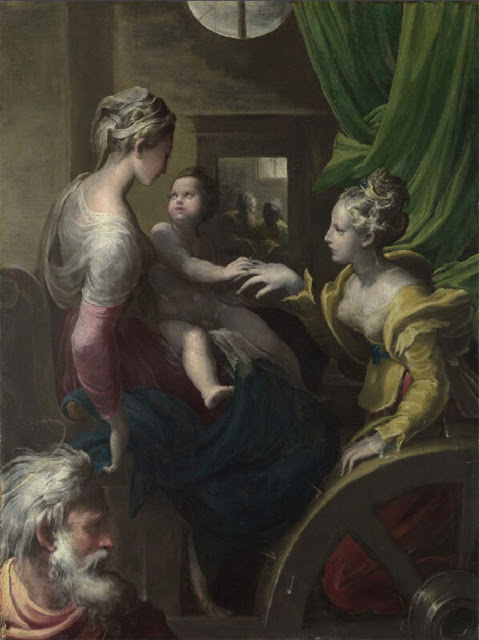 Below is a Bedoli picture, the Madonna of the Magnificat with Saint Francis in Budapest. To the untrained eye Bedoli's holy family is stiff and doll-like, existing in a different visual universe from the psychologically nuanced Sudeley Castle painting. Gould's theory was that Bedoli churned out a lot of undistinguished work but, when he really applied himself, could rise to nearly the level of Parmigianino's achievement. The Sudeley Castle painting was Bedoli on a good day. Maybe the best day of his life. 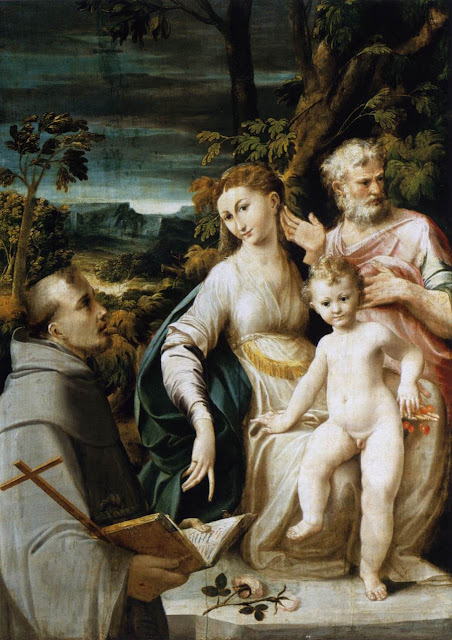 There were dissenters among Parmigianino experts, but most Renaissance scholars, and everyone else, assumed that someone of Gould's reputation had good reason for this belief. The idea of Bedoli as a sometimes brilliant Parmigianino imitator gained traction across the globe. One anonymous Internet poster recalled that "the first curator of the Getty Museum" asserted the Sudeley Castle painting was by Bedoli.

"Maybe the NG's 1974 purchase of the 'Mystic Marriage' got in the way of recognition, (which they declared was the best Parmigianino in Britain) they hadn't heard of it and the powers that were decided to call the Sudeley work [as by] Mazzola Bedoli instead."

The glum Mystic Marriage lacks the star quality of the luminous Virgin with Child. There well may have been issues of ego and institutional face-saving. But connoisseurship is a difficult puzzle, and even the most perceptive expert can fumble when he's missing a piece or two. David Ekserdjian, whose 2006 Parmigianino monograph also championed the Getty painting as autograph, speaks in that book of a paradigm shift.

"I am convinced that the reason it [the Sudeley Castle Virgin] has frequently been doubted is that it has been dated far too early in Parmigianino's career. In compositional type it plainly resembles the Courtauld Virgin and Child, and even more the Madonna di San Zaccaria, but that does not mean it of the same period as them. Rather it belongs to his very last years, and consequently with the Cupid, the Dresden altarpiece, and above all with the Lucretia, whose cooly metallic blue and yellow draperies and overheated pink flesh tones it shares." 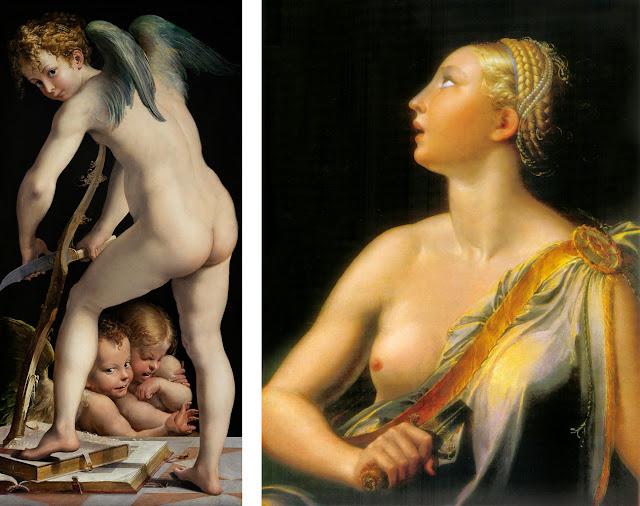 Parmigianino is esteemed for the few highly finished works of his last decade, the 1530s. This group includes the iconic Madonna of the Long Neck and the much-copied Cupid Carving His Bow (c. 1533-35, above left). The latter was the inspiration for Edmé Bouchardon's marble Cupid Carving a Bow from Hercules' Club, recently shown at the Getty, and even for Velázquez's Rokeby Venus, his only (female) nude. Parmigianino's Lucretia (above right) was the cover image for Ekserdjian's book.

Gould's 1994 death led to a prompt reversion to the mean. With no prominent voice arguing otherwise, the Virgin with Child was once more embraced as a genuine Parmigianino of the 1530s. London's National Gallery had it on loan from 2011 to 2015, and it's reported they considered buying it.

Just this week a Times article quoted Ekserdjian as saying that, of all the artist's works, the Getty painting is "the most entrancing and gorgeous of the lot… an elegant and stylish figural group, combined with a luscious landscape."

There are probably just two Parmigianino paintings now in American museums. Both are in Texas, at the Kimbell and the Blanton Museum of Art, Austin (a monochrome oil sketch for a print). Neither is comparable to the Virgin with Child.

Virgin with Child joins five Parmigianino drawings at the Getty. LACMA has another drawing, plus about 17 prints by the artist and his circle. Below is Diogenes (c. 1527), a chiaroscuro woodcut by Ugo da Carpi from a Parmigianino design. The plucked rooster is a dig at Plato, who defined the human species as a flightless biped. Parmigianino trolls wise-guy experts, pundits, TED talkers, and connoisseurs. "Nice job, Einstein!" 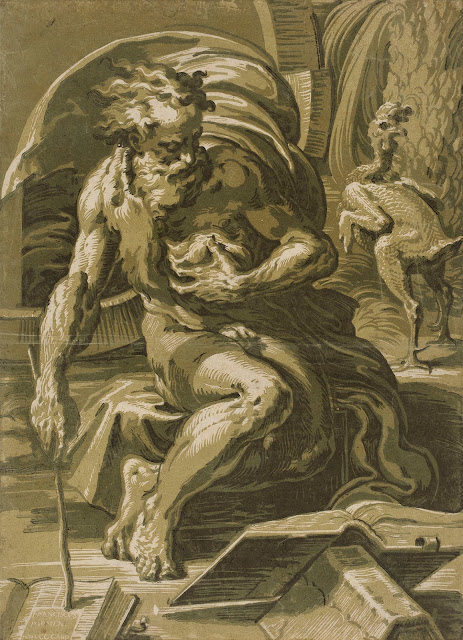 Anonymous said…
If only by default, the Parmigianino at the Getty looks more refined and sophisticated than his works owned by the Detroit Institute and The Kimbell.

The face of the Christ figure in the Parmigianino at the DIA makes me think of the artistic style that will be common among the works at the future George Lucas Museum.

To each his own.