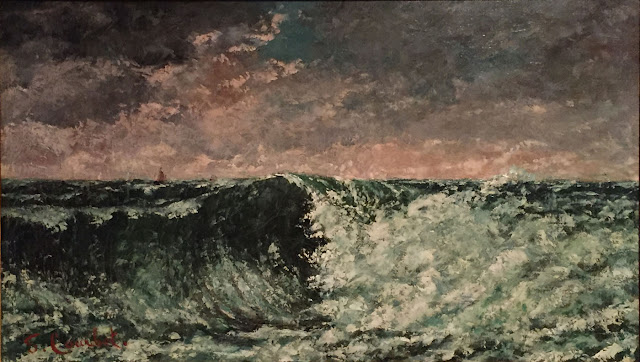 This beach season two Gustave Courbet seascapes have been placed on loan to L.A. museums. LACMA is showing La Vague (The Wave), c. 1869, a promised gift from Emily and Teddy Greenspan. The Getty Museum recently put on view Marine, Trouville (1865), a loan from the Louis-Dreyfus family collection.

The LACMA painting (top) is one of about 60 pictures of crashing waves that Courbet created in the late 1860s. They anticipate the serialism of Monet. Courbet was drawn to the Normandy coast, a region known for its chalk cliffs and operatic thunderstorms. Though Courbet's motif has been echoed in generations of motel room kitsch, it was radical for its time. The Greenspan painting's leaden sky and sea is evenly bisected by the horizon—a "don't" of academic composition. Some critics saw Courbet's cresting waves as a message to rise up against Napoleon III, whose reign ended in 1870.

LACMA has no Courbet, so this is a major addition to its 19th-century European collection.

The painting lent to the Getty is brighter, almost a cloud study with its low horizon. It was owned by the late William Louis-Dreyfus, a billionaire financier, gentleman farmer, poet, and social activist who is now inevitably identified as the father of Julia Louis-Dreyfus. William's eclectic art collection is to be sold off to benefit the Harlem Children's Zone.

"In a huge, empty room, a fat, dirty, greasy man was slapping white paint on a blank canvas with a kitchen knife. From time to time he would press his face against the window and look out at the storm. The sea came so close that it seemed to batter the house and completely envelope it in its foam and roar. The salty water beat against the windowpanes like hail, and ran down the walls. On his mantelpiece was a bottle of cider next to a half-filled glass. Now and then, Courbet would take a few swigs, and then return to his work." 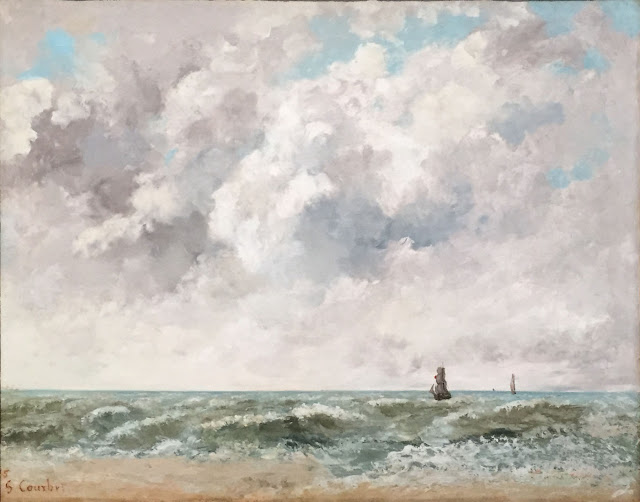