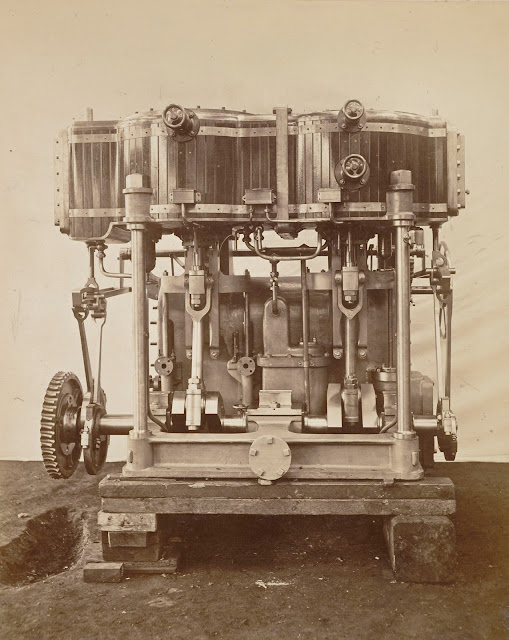 The Getty Museum's "Thomas Annan, Photographer of Glasgow" is the first full survey of an artist who occupies a modest though secure niche in the history of photography. It brims with surprises. Who knew that Annan was the steampunk prophet of machine-age objectivity? (Answer: Sam Wagstaff, who bought a print of Annan's c. 1875 Steam Engine, above, now in the Getty collection.)

Thomas Annan (1829-1887) is identified with his poetic photographs of Glasgow's slums. Their "squalid wretchedness [was] probably unequalled in any other town in the British dominions," an 1842 police report had it. Annan captured Glasgow's claustrophobic alleys ("closes") before they were razed in a program of, well, gentrification. Annan's lens finds hungry children staring blankly back, some ghosted by the long exposure. Annan made barely 30 of these haunting pictures. Their power has made them a standard of Photography 101 classes.
At the Getty, a room of Glaswegian dystopia leads to terra incognito—phases of Annan's art that are hardly known to anyone save specialists. This is a transatlantic loan exhibition drawing on Scottish collections and Montreal's Canadian Centre for Architecture. Nothing like it has been mounted before, not even in Scotland.

Thomas Annan was the exact contemporary of America's Carleton Watkins (both born 1829). Should the two be compared, and they generally aren't, they would be understood as opposite poles of late 19th-century photography. Sublime Yosemite v. trainspotting Glasgow.

Yet both artists were jacks of all trades, negotiating a tenuous gig economy of the time. Each excelled at wresting high art from nominally boring commercial work. The New Objectivity of Annan's steam engines has something in common with Watkins' cling peaches.

Like Watkins, Annan produced classically beautiful landscapes of his native land. He also responded to landscapes scarred by Progress in all its messiness. These seem contemporary above all.