Did Goya Paint This Anteater?

This year Los Angeles marks its first celebration of Indigenous People's Day. As we ponder what America means going forward, consider what it meant in July 1776. Philadelphia colonists were rebelling against Britain's King George III, while Spain's Charles III had happier news. In that month a live giant anteater, found near Buenos Aires, was presented to Charles as a token of the loyalty of his American colonies. It was the first "ant bear" in Europe. Charles III installed it in the royal zoo at Buen Retiro. It was fed bread and mincemeat, as an approximation to whatever kind of ants they had in Argentina. The creature pined away for the pampas and died just seven months later.

Charles III had commissioned a portrait of the anteater from his court painter, the German-born Anton Raphael Mengs. The resulting painting, His Majesty's Giant Anteater, is owned by Madrid's Museum of Natural Sciences and is currently a high point of the Huntington's PST LA/LA offering, "Visual Voyages: Images of Latin American Nature from Columbus to Darwin."

It's a nearly life-size painting, over six feet wide, that conjoins Enlightenment empiricism with fashionable neoclassism. A short bio of the royal pet appears of base of an obelisk, all caps with V's for U's. The landscape background must be Spain, with a castle in the misty distance. (The anteater is shown twice, rolled up in a ball for sleeping at right.)

It appears that the great Mengs considered natural history specimens to be below his pay grade. A Sep. 17, 1776, memorandum records that Mengs was paid for the anteater picture but that it had been painted by another, unnamed artist under his supervision. The Huntington label calls it circle of Mengs and does not mention a recent bombshell theory: that the anteater was painted by Francisco de Goya.

That is the bold thesis of Javier Jordán de Urríes y de la Colina, curator of the Royal Palace, Aranjuez, in a 2011 article. Goya studied with Mengs when he first moved to Madrid. They soon fell out, but in 1775 Mengs hired Goya to design royal tapestries. Goya's tapestry cartoons included a couple of all-animal subjects, such as Decoy Hunting, 1775. De Urríes finds Goya's brushwork for the dog's fur to be similar to that of the anteater. 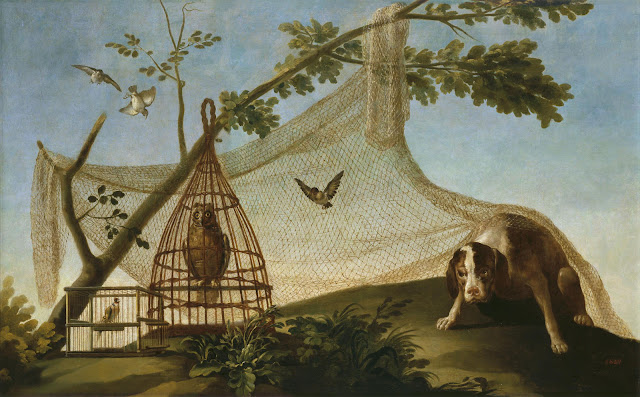 It is the landscape elements of paintings Goya did within a few years of 1776 that pose the strongest parallels to His Majesty's Giant Anteater. De Urríes cites similarities in the rocks, trees, shadows, rolling hills, and pastel palette. The tiny castle in the background of the anteater painting resembles the much bigger one in the background of another tapestry cartoon, The Kite.

Goya scholars are understandably reluctant to accept an unsigned painting, so different from the artist's usual output. But de Urríes' case is not easily dismissed, even if it lacks a smoking gun. It adds another level of intrigue to an already intriguing painting. (Below is Goya's Charles III in Hunting Dress, 1786, with the King's dog curled up—like a sleeping anteater?) 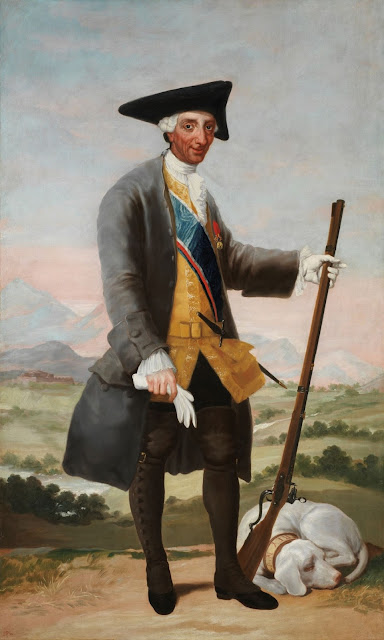