African Iron at the Fowler 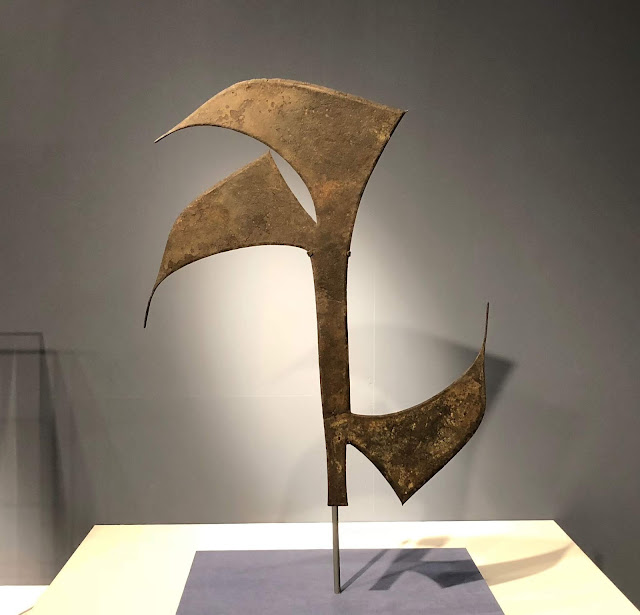 In the Marvel universe, vibranium was an element found in a meteorite. In our universe, iron was a precious metal known to ancient cultures only from meteorites. Somewhere around the middle of the first millennium BC Sub-Saharan Africans discovered iron ore and the technology of smelting. Africa had an iron age, not a bronze age. (China, which also had iron ore, had both.)

The UCLA Fowler Museum's "Striking Iron: The Art of African Blacksmiths" is the first international loan exhibition to explore African ironwork as an artistic medium. Debuting in L.A., it will travel to the Smithsonian and the Musée du Quai Branly, Paris. (At top, a 19th-century Nkutshu Throwing Knife-Shaped Currency, one of the show's standouts.) 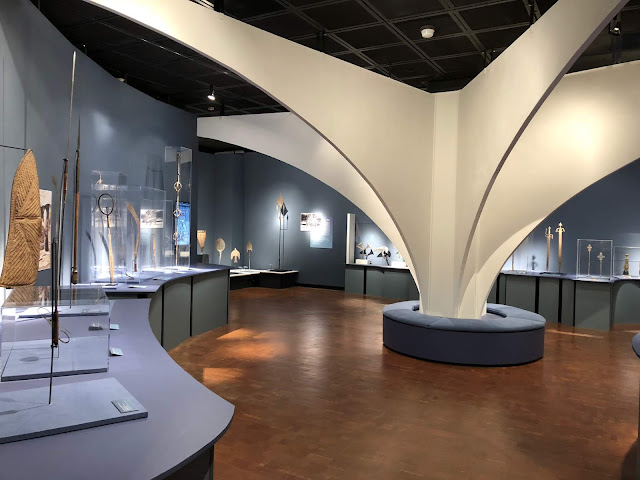 Iron has a higher melting point than bronze, preventing lost-wax casting. African blacksmiths used a limited vocabulary of tools: hammers, anvils, and tongs. Sub-Saharan ironwork is thus a sculptural medium that tends to be 1D (a wiry "drawing in space") or 2D (a "silhouette," or folded into "origami"). These nominal limitations were a springboard for endless variation. 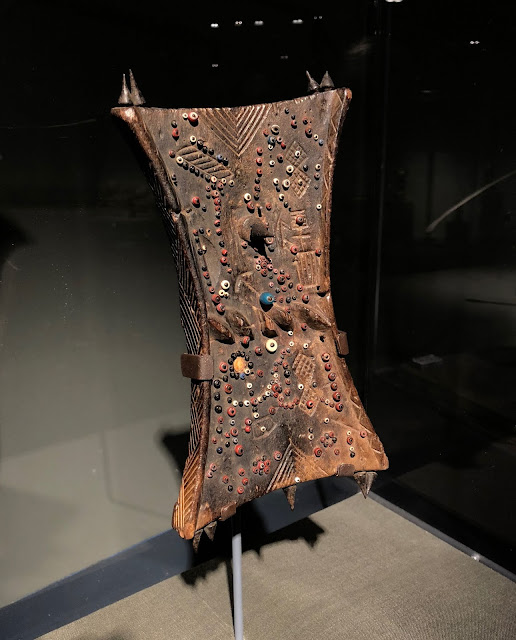 The exhibition's 225 objects span archeological finds to the present day. Most are 19th and 20th century. They include some familiar African forms not necessarily associated with iron. Luba storytellers used the memory board (lukasa, above) like a PowerPoint slide, to recall details of historical epics. Its carved and beaded surface is studded with miniature iron anvils. 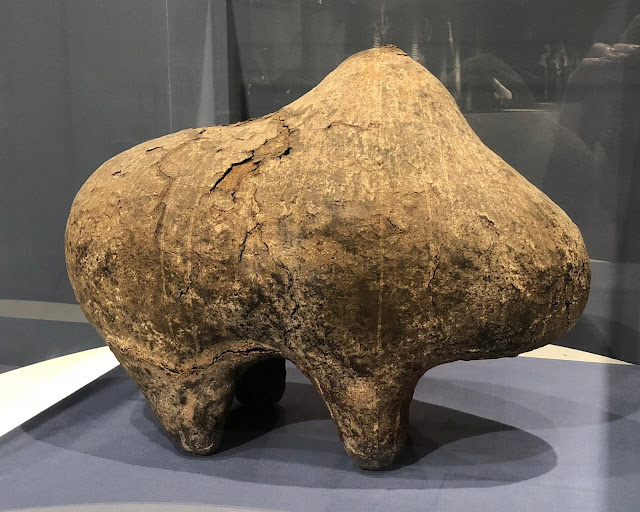 Western modernists adored the stolid, zoomorphic abstraction of the Bamana boli. They saw only the surface. Inside the boli contains iron nuggets to activate its mystical force. 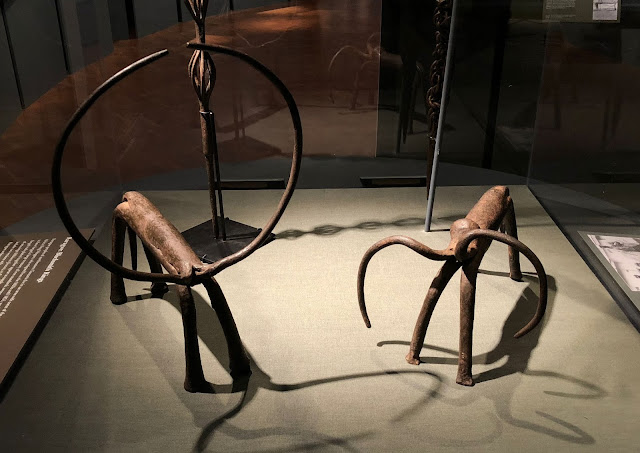 Compare the bulkily 3D boli to the wiry, mid-19th century Bovine Figures of the Karagwe Kingdom (Tanzania). Collectively they're reminiscent of Picasso's 1945 deconstruction of The Bull. 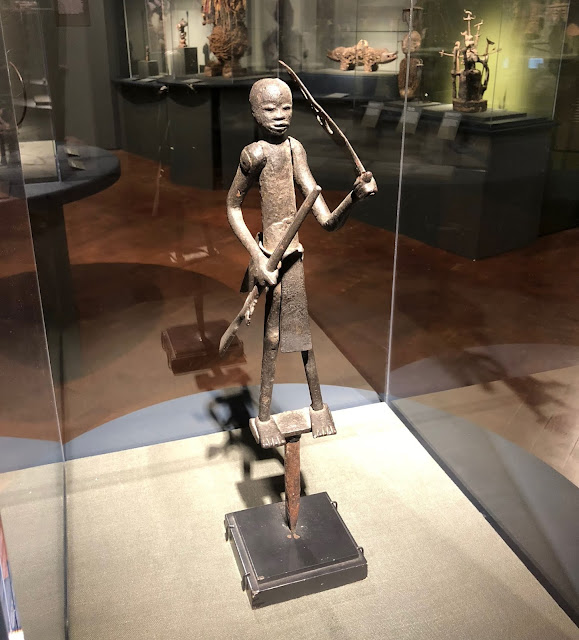 African blacksmiths were able to create small heads striking a perfect balance between naturalism and abstraction. These ideal heads could be melded onto bodies combining linear and planar elements. Above is a magisterial Gu, the Fon god of ironworking, late 19th century. He brandishes a sword and a rifle, demonstrating how dangerous iron can be. (In Yorubaland Gu is "a needle sharp at both ends.")

Throwing knives were carried on the shoulder. Though they could be deadly weapons, they were also dance wands and prestige luxury goods. 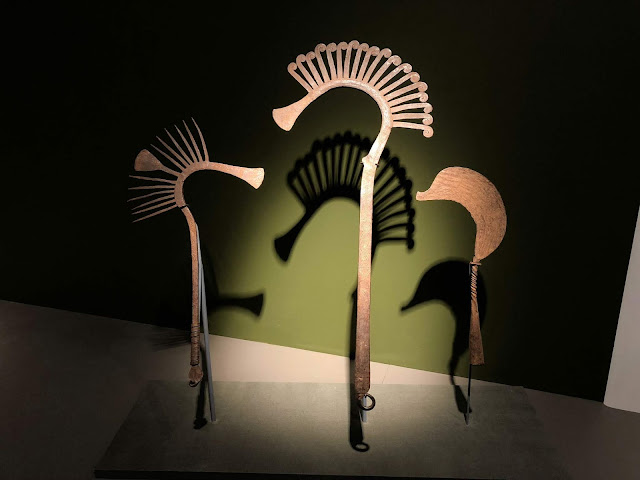 The ritual sickles of the Ga'anda (Nigeria) evidence the potential of sculpture as a 2D medium. The heads recall the horses of Geometric Greece, and the inscribed designs record scarification patterns of Ga'anda women.

Another unexpected cross-culture moment is a 19th-century oil lamp, Sorko or Bozo (today's Mali). It must reflect the Jewish/Islamic "Tree of Life," demonstrating trans-Saharan conversations we are only beginning to be understood. 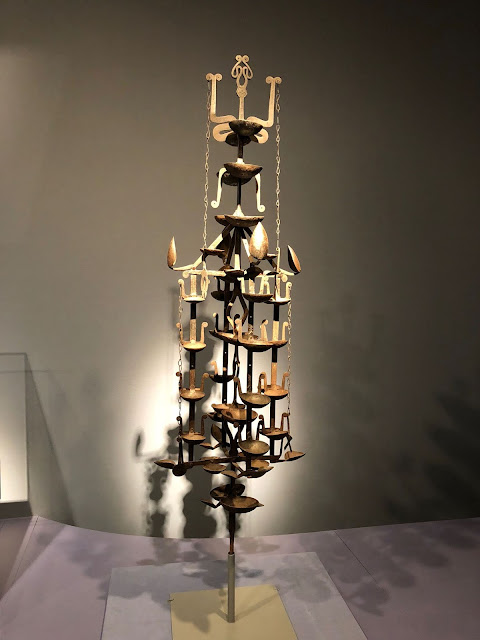