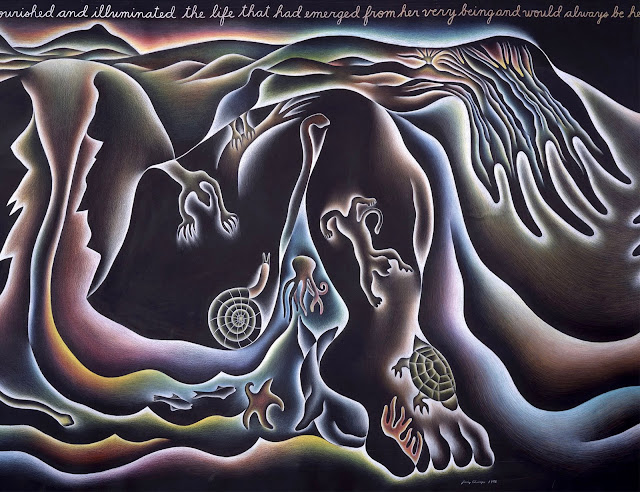 This summer the Pasadena Museum of California Art has a pairing I'll bet has never been tried before: Judy Chicago and Grafton Tyler Brown. The larger exhibition reunites works from Chicago's Birth Project (1980-85), the ambitious collaboration that followed The Dinner Party (1974-79).

Chicago recruited over 150 needleworkers to create textile-pictures from her designs on the theme of birth. The show's apex is however Chicago's 32-foot color drawing, In the Beginning. The artist has described it as a corrective to Michelangelo's vision of birth with an all-male cast, The Creation of Adam. Bigger than almost any AbEx painting, Chicago's drawing is a prismatic abstraction, a history of the world, and a manifesto.

PMCA's smaller back gallery houses "Grafton Tyler Brown: Exploring California." Brown (1841-1918) is identified as the first African-American artist of the American West. Born in Pennsylvania to to a freedman abolitionist, he moved to San Francisco where, passing for white, he become a successful lithographer, churning out Victorian graphics for Levi Strauss and Ghiradelli chocolates. In 1882, the year he turned 41, Brown moved to Victoria, Canada, shifting his attention to landscape painting and traveling widely in the U.S. Northwest. His great subject was Yellowstone. Where Thomas Moran channeled Turner, Brown's Grotto Geyser (1891) has more the quality of Friedrich. It records a non-event, a geyser that is not erupting. Its subject is a natural "sculpture" of mineral deposits, a weird face in nature rhyming with Chicago's human landscapes of birthing. 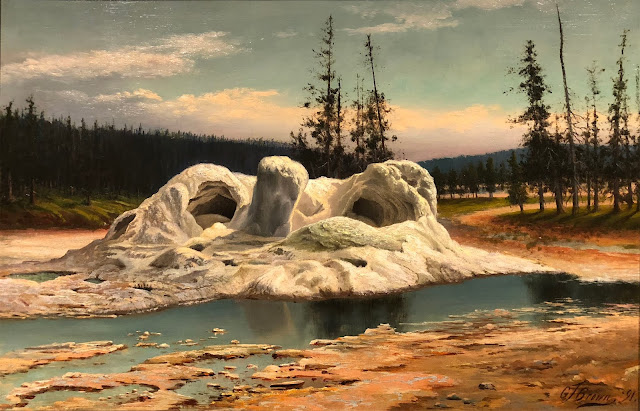