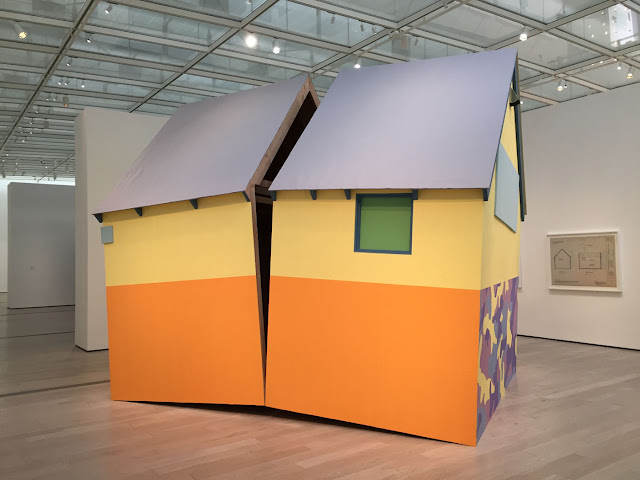 A marquee work of LACMA's "Home—So Different, So Appealing" is Daniel Joseph Martinez's The House America Built (2004-2017). It is a replica of Ted Kaczynski's Unabomber cabin, painted at each showing in the latest Martha Stewart palette. Martinez drew on "stranger than fiction" coincidences between math genius/madman Kaczynski and corrupt lifestyle maven Stewart.

• Both were second-generation Polish-Americans.

• Both did something illegal (sending mail bombs; insider trading) and were in Federal prison at the same time.

Kaczynski was caught in part because of an "obsession with wood." His bombs contained tree branches or bark; two of his victims had "wood" in their names, and another was a lobbyist for forestry interests. Stewart: "Bringing the rustic, earthy quality of wood grain into your home can add interest and texture to a variety of furniture pieces and accents."

The Martinez sculpture, of plywood, also references Gordon Matta-Clark's 1974 Splitting. With its up-to-date palette, it is a metaphor for a nation split in two. The house America built is the House of Usher (and it was the crack in Roderick Usher's ancestral home that inspired the livid scar of Captain Ahab…)
Email Post
Labels: Daniel Martinez Edgar Allan Poe Gordon Matta-Clark Herman Melville LACMA Martha Stewart Ted Kaczynski

Unknown said…
I have read your article, it is very informative and helpful for me.I admire the valuable information you offer in your articles. Thanks for posting it.. Remove Reports