A Camille Claudel (and a Rodin) for the Getty 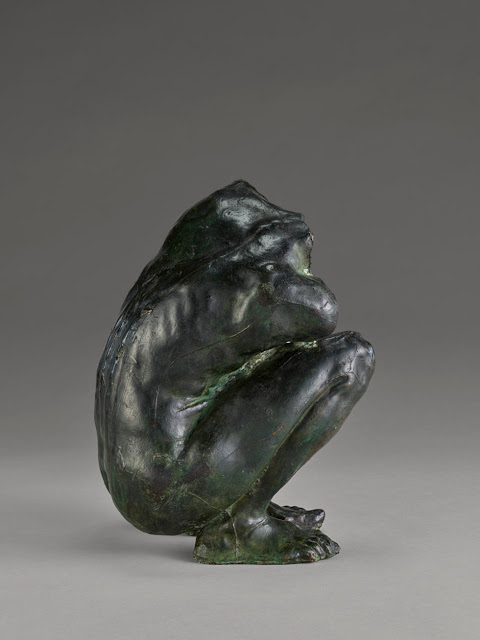 Camille Claudel spent her career, and most of her art-history afterlife, in the shadow of Auguste Rodin. Claudel was Rodin's student, assistant, and lover. Recent years have seen a resurgence of interest in Claudel, a successful woman artist at the dawn of modernism. The Getty Museum has just announced the purchase of bronze sculptures by both Claudel and Rodin, and the press release gives Claudel top billing.

The acquisitions are Claudel's Torso of a Crouching Woman (modeled 1884-5, cast by 1913; top of post) and Auguste Rodin's Bust of John the Baptist (modeled 1880, cast 1886, below). The Rodin is everything you'd expect of a Rodin bust. The Claudel is difficult, near-abstract, and arguably feminist. 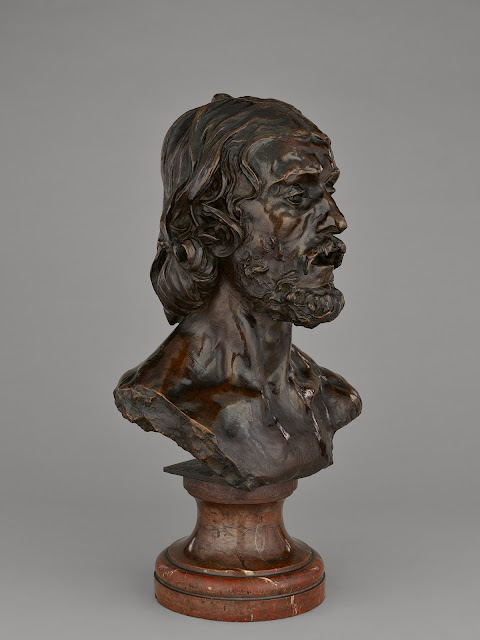 There are hundreds of Rodin bronzes in American museums. Most were cast long after the artist's death, as authorized in his will. For the Getty the challenge has been finding a Rodin bronze that would augment the large groups of posthumous Rodins at LACMA and the Norton Simon. The early John the Baptist is historically significant, being not just from the artist's lifetime but before he became an art superstar churning out editions for wealthy Americans. 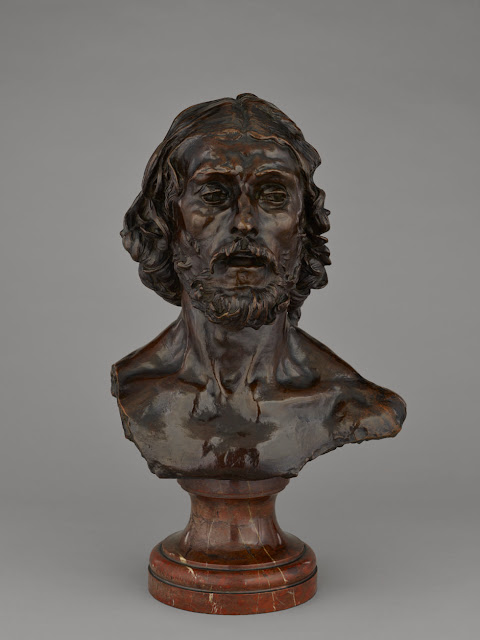 The Getty sculpture is one of five early busts related to Rodin's full-figure nude statue of John the Baptist, now in Paris at the Musée d'Orsay. The Norton Simon Museum has a 1960s cast of this statue in its garden. 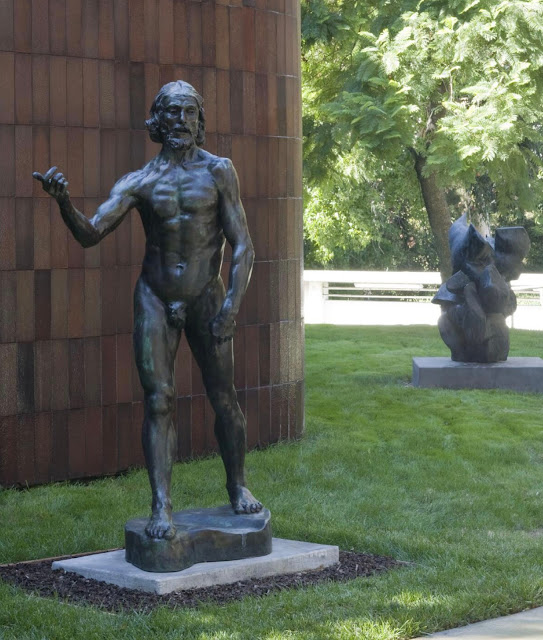 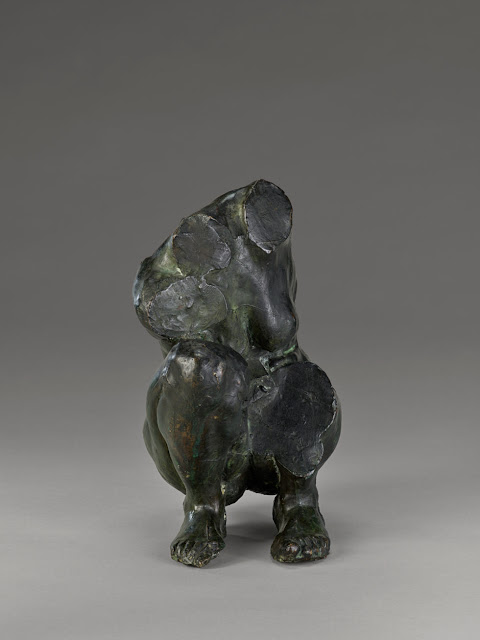 The Claudel Torso of a Crouching Woman is evidently the one recently offered by Galerie Malaquais, Paris. It becomes one of just a half-dozen Claudels in American museums, all small. About 14 inches high, the Getty sculpture is the most forward-looking of the lot. It takes Rodin's affection for fragments to an extreme. 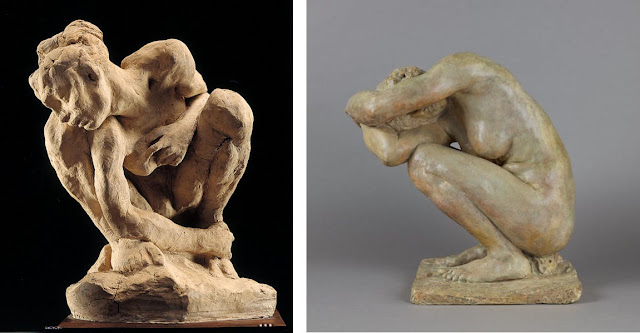 Rodin did a full-figure terra-cotta Crouching Woman (1881-82, above left) as part of his Gates of Hell project. Claudel did a rather different Crouching Woman in plaster, c. 1884-85 (above right). The woman's mostly concealed face was said to be a self-portrait.

About the same time Claudel created another plaster truncated to the point of abstraction. Claudel hacked off her own head, arms, and left knee. It evokes an ancient fragment, or more precisely, a Neoclassical tidying-up of a fragment. As in the Venus de Milo, missing extremities leave clean flat planes.

Claudel was praised by critics such as Octave Mirabeau (who owned van Gogh's Irises) and Louis Vauxcelles (who rated her sculpture's counterpart to painter Berthe Morisot). For Mirabeau Claudel was "a revolt against nature; a woman genius."

Like van Gogh, Claudel struggled with mental illness, and her life ended badly. She died forgotten in 1943, after 30 years in an insane asylum, to be buried in a communal grave, in Nazi-occupied soil.

Also like van Gogh, Claudel's exceptional biography has pre-empted a balanced assessment of her achievement. The "mutilation" of the the Torso has been offered as evidence of the artist's destructive madness or righteous anger.

As far as we know, Claudel was as sane as anybody when she created the plaster. She was still on good terms with Rodin (the relationship went south with her 1892 abortion). Claudel wasn't so okay in 1913, the year she was committed to an asylum. The cast bronze appears in a 1913 article by the artist's brother, Paul.

Only two bronzes of the Torso of a Crouching Woman were made. The other is in a small provincial museum in France, the Museum of Art and Industry, Roubaix. 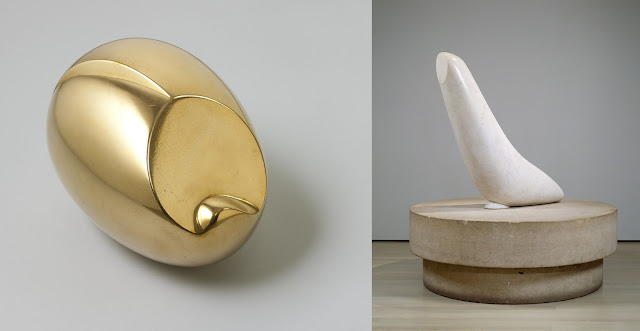 It wasn't long after the casting of Claudel's bronze Torso that Brancusi, another former assistant of Rodin's, made flat-plane truncation a modernist subject in its own right, as in The Newborn (1915 marble and later bronzes) and The Miracle (Seal) (c. 1930-32). 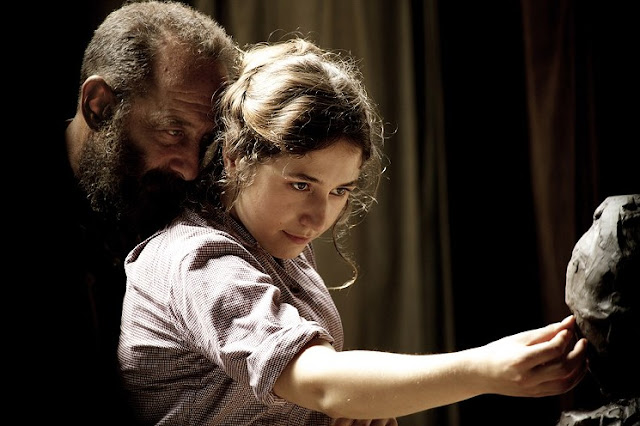