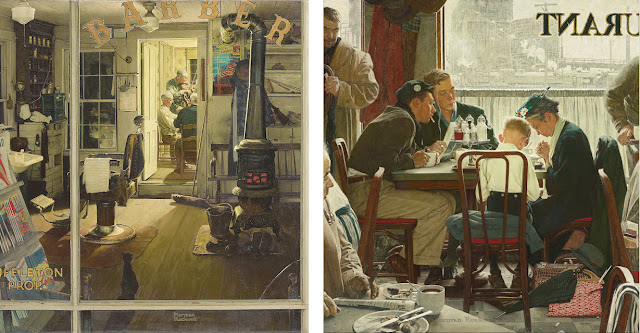 With the results of the Berkshire Museum's controversial auction sales in, ArtNews calculates that the Lucas Museum of Narrative Art paid no more than "around $29.3 million" for Norman Rockwell's Shuffleton's Barbershop (1950) in a private sale. It could be less than that if Sotheby's gave the Berkshire part of the auction premiums (an "enhanced hammer").

That figure is well under the auction record for a Norman Rockwell painting, the $46 million (with buyer's premium) paid for Saying Grace (1951, upper left) in 2013. That painting also went to George Lucas.

In February I wrote that "if Lucas paid $46 million for Saying Grace, I can't imagine why he wouldn't pay a comparable sum at least for  Shuffleton's Barbershop." Rockwell's children called Shuffleton's their father's best work. The nod to Mondrian might be expected to reassure big-money buyers of Rockwell's status as a "real" artist. In contrast the earnestly pious theme of Saying Grace might have limited the pool of buyers. Shuffleton's is a few inches bigger (46 x 43 in.) than Saying Grace.

It seems the Lucas got a bargain—as did the auction buyers in this almost universally condemned sale. Because the realized prices were so low ($42 million v. the planned $55 million), the Berkshire has court approval to sell yet more works.
Email Post
Labels: Lucas Museum of Narrative Art Norman Rockwell