The Huntington's Art Collectors' Council has purchased two panel paintings by Cosimo Rosselli, Saint Ansanus and Saint Anthony Abbot (c. 1470). They were originally part of a large altarpiece that a dealer carved up in the late 18th century. The central image is a Madonna and Child in Glory acquired by Arabella Huntington for her New York apartment and long in the Huntington collection.
The two new saints are each about 36 inches high. They were not created as separate panels but were continuous with the image of the Madonna. Each includes a slice of Mary's blue robe. The altarpiece is now in seven pieces, one unlocated. The Cornell Fine Arts Museum, near Orlando, Florida, reassembled all but the missing panel for a 2001 exhibition.

Rosselli was a literal "Pre-Raphaelite" of the Italian century that was the touchstone for the Victorian retro-avant-garde movement appropriating that name. The Art Collectors' Council has also bought an 1865 British watercolor, The Open Sea, by Pre-Raphaelite artist John Brett.

Brett is best known for The Stonebreaker, a painting whose hyperreal detail impressed Ruskin. Brett produced many seascapes, sailing the Mediterranean in a private schooner. In The Open Sea the fractal empiricism of the ocean surface owes nothing to Turner. It looks forward to Vija Celmins. 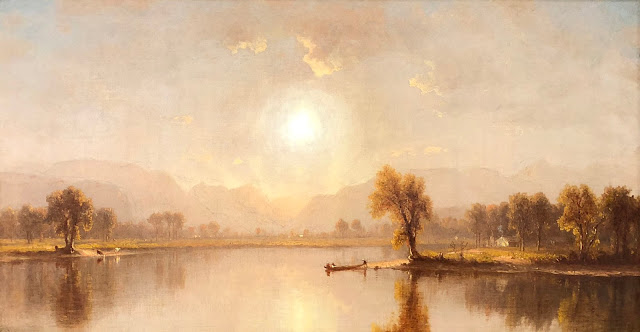 The Art Collectors' Council alternates yearly between buying European and American art. The Huntington has separately been given an important American painting, Sanford Robinson Gifford's An October Afternoon on the Juniata (1879). Now on view in the Virginia Steele Scott Galleries, it's a gift of Robert and Veronique Pittman and Alexandria and Michael N. Altman in honor of the Huntington's departed art collection director Kevin Salatino.

Like most Hudson River School paintings, October Afternoon is not a picture of that New York river. The Juniata winds through the conflicted middle Pennsylvania of Gettysburg and Joe Paterno. Gifford's subject is light, the murky haze of this American life.
Email Post
Labels: Cosimo Rosselli Huntington John Brett Sanford Robinson Gifford