"The main thing about directing is: photograph the people's eyes," said John Ford. Eyes are the natural focal point of figurative art around the globe and across time. LACMA's "The Inner Eye: Vision and Transcendence in African Arts" explores the expressive value of eyes in African sculpture. As a concept, it's more populist than scholarly. Ditto for the show's geographic scope, spanning the whole Sub-Saharan continent and Madagascar. Mainly "The Inner Eye," a translation of a Yoruban phrase and concept, is a pretext to bring over 100 sculptures, many of them famous, to Los Angeles. Installed in the Resnick Pavilion, it's a compendium of heavy-lidded eyes, read as beatific or all-seeing; abstract eyes, cowry eyes, too many eyes, or no eyes at all. Everything except side-eyes—the aesthetic is one of serene symmetry and unsnarky epiphany.
About half the pieces are lent by uncredited private collections. That's extraordinary given the high ambient level of quality. Institutional lenders include the Fowler Museum (LACMA consulting curator Polly Nooter Roberts a UCLA professor). "The Inner Eye" is showing a famed Bamileke Headcrest from the Fowler, plus Lega works from the Jay Last collection.
The exhibition is also cause for LACMA to debut its rare and early Gwan Mother and Child Figure acquired in 2013. It's from Mali, as is a ceramic Kneeling Female Figure. Both are dated somewhere around 1300—two centuries earlier than the Tilman Reimenschneiders in the neighboring "Renaissance and Reformation" show. 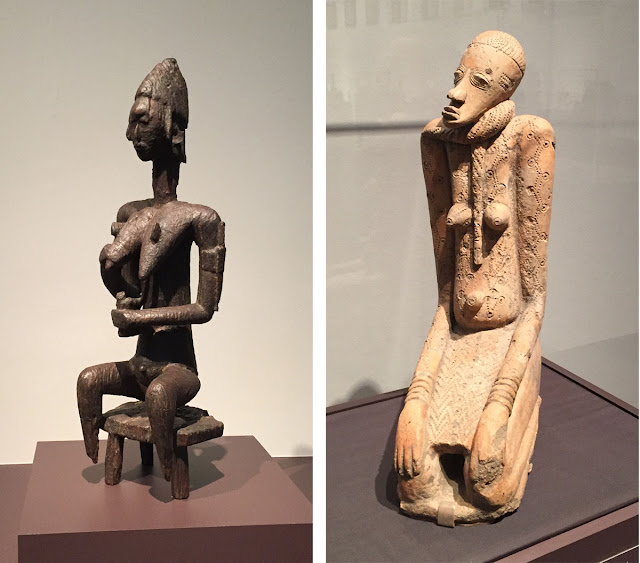 Madagascar is physically close to Africa, culturally closer to the Austronesians, subject of a 2016 Fowler exhibition. "The Inner Eye" has two pairs of male-and-female figures. The smaller pair is asymmetrical, as if caught in dance or rapture. The carver couldn't anticipate how the figures would soften, weather, and crack—much less that they'd one day be prized by global audiences. There's a lot that's not "African" about these figures, but there's something African about the eyes.

Mattia Nuzzo said…
This show was such an unexpected delight. I usually find it difficult to appreciate much African art, but this exhibit really blew me away. It may be due to the populist presentation, but I can't wait to go back. I can only hope that LACMA is working behind the scenes to add some of these pieces to their collection. If a permanent display in the new museum could approach something like this it'd be amazing.
February 28, 2017 at 10:14 AM

Anonymous said…
LACMA should concentrate on doing what Mattia suggests or recommends instead of using its finite, limited resources and tearing down many of the existing buildings and redoing the museum.

One of the pieces is on loan from the Metropolitan Museum. Maybe an institution like that one has the huge gobs of money in general to strive for what LACMA wants to do. But even in the Met's case, attempting a LACMA slash-and-burn solution is stretching things.

If Jerry Perenchio really cared about LACMA, he'd want to give his collection without strings attached. The fact he chooses otherwise says a lot about what a flop a revamped LACMA will be. Sort of like a case of killing the patient in order to save him.