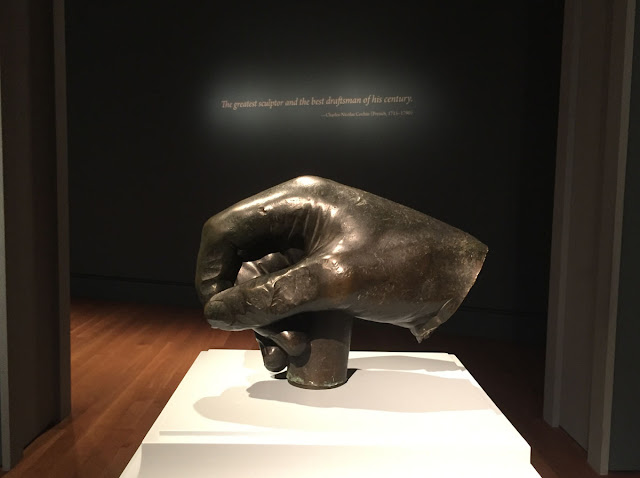 The Getty Museum's "Bouchardon: Royal Artist of the Enlightenment" ends with a larger-than-life gesture: the bronze hand of the artist's equestrian statue of Louis XV. The monument was toppled during the French Revolution, and this is all that remains of it.

Louis XV is remembered for a style of French furniture and "après moi, le déluge." Less survives of the reputation of Edmé Bourchardon (1698-1762), "the greatest sculptor and the best draftsman of his century." That assessment, by critic Charles-Nicolas Cochin, is the stenciling on the wall. You won't walk out 100 percent convinced (Houdon, Watteau…) but the exhibition demonstrates why Bouchardon was so acclaimed. It doubles as a meditation on how fame may pass for reasons hard to pin down.

The reputation of Romantic poet Percy Bysshe Shelley is now overshadowed by that of his wife Mary, author of Frankenstein. Percy's poem Ozymandias, on the transience of fame, is now recalled as the title of a Breaking Bad episode. Remember my name.