LACMA and the Huntington have jointly acquired two knotty pine chairs (1979-80) that Donald Judd designed for his children's use in Marfa, Texas. They go with the Prototype Desk (1978) that LACMA acquired in 2011. The suite will debut at the Huntington in 2018 and thereafter alternate between the two institutions.
The purchase augments a group of pivotal modern furnishings at both museums, starting with an Arthur Mackmurdo Century Guild Dining Chair (1883, below) that is also jointly owned. 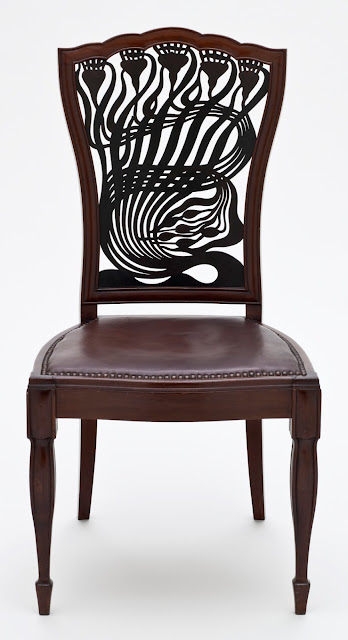 LACMA has two Judd sculptures, including the monumental Untitled (for Leo Castelli), 1977, installed in the neglected, tar-pit-adjacent sculpture garden east of the Bing Center. The Prototype Chairs are the first Judd works for the Huntington collection. (Huntington curator Kevin Salatino asked architect Frederick Fisher to "imagine that Donald Judd was a Shaker" in designing the new Jonathan and Karin Fielding Wing.)