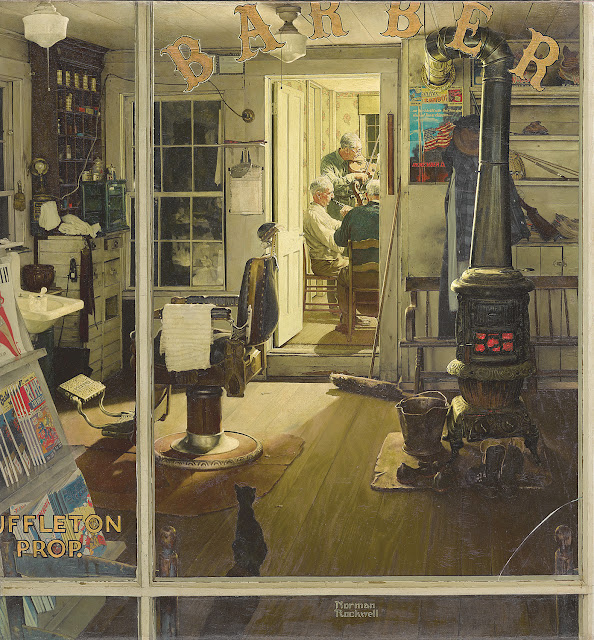 The Berkshire Museum's proposed settlement with the Massachusetts attorney general would allow it to sell Norman Rockwell's Shuffleton's Barbershop to an unidentified American museum. This has led to speculation that the intended buyer is either the Crystal Bridges Museum of American Art (Walmart money; Bentonville, Ark.) or the Lucas Museum of Narrative Art (Star Wars money; to be built in L.A.'s Exposition Park).

That's because (a) Shuffleton's Barbershop has been valued at $20-$30 million, and (b) it's a Norman Rockwell. There aren't many museums in a position to spend that kind of money on any work of art. Nor are there many that would go out of their way to buy a Norman Rockwell at any price.

Some claims to the contrary, Norman Rockwell remains a minor-to-irrelevant figure as the vast majority of curators, critics, and collectors see it. The intersection of "I want a Rockwell" and "I can afford a Rockwell" pretty much comes down to the two institutions I just mentioned plus Steven Spielberg. And Spielberg doesn't have a museum, just Oscars.

It's not hard to understand why the would-be purchaser is laying low. Rockwell himself donated Shuffleton's Barbershop to the Berkshire Museum (which now wants to sell it to fund a make-over emphasizing interactive science exhibits). Rockwell's own children have sued to prevent the sale. Both the American Alliance of Museums and the Association of Art Museum Directors have condemned the deaccession as "a violation of the public trust." The settlement needs court approval and thus still could fall apart. 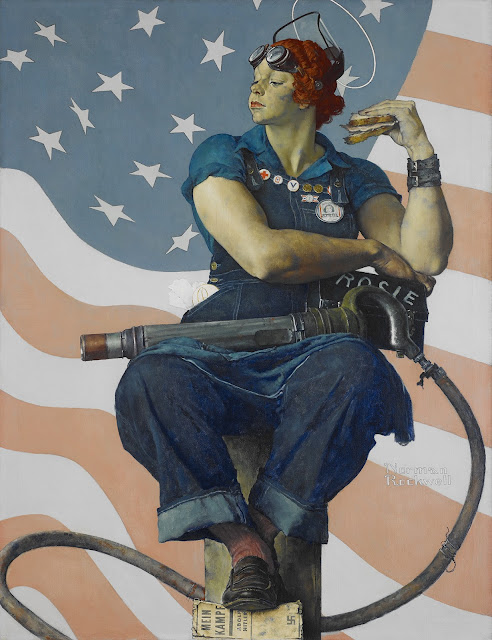 Crystal Bridges has not been shy about buying art from controversial deaccessions in the past. It owns three Norman Rockwell paintings. The notable one is Rosie the Riveter (1943), an American icon undoubtedly, though that doesn't make it art. Rosie is stomping a copy of Mein Kampf, and she's based on a Michelangelo sibyl. But that doesn't make it art either.

Rockwell's paintings were created as magazine illustrations. They often set their figures on blank or pale backgrounds, such as the pastel flag behind Rosie. This made it easier to fit in text.

Rockwell did some pictures with full backgrounds, functioning more like traditional easel paintings. Shuffleton's Barbershop falls into that category. It's framed by a window-frame, almost like a trompe l'oeil. The view into a distant room recalls de Hooch. This demonstrates not that Rockwell was a great artist but that he knew about great artists, as any good illustrator should. 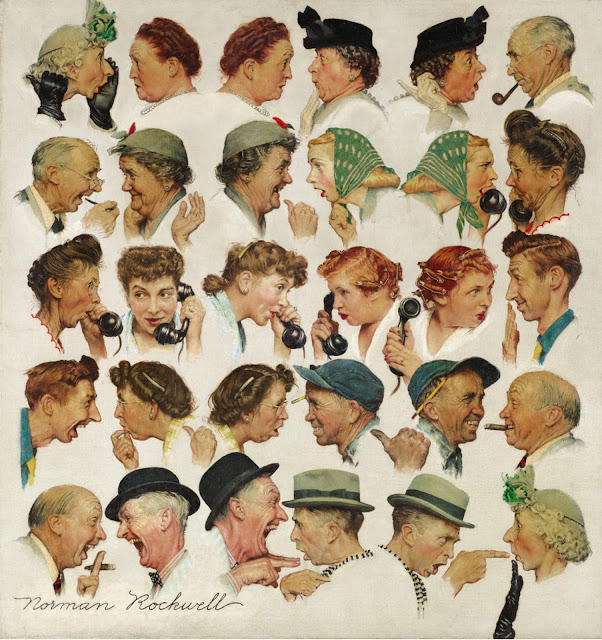 George Lucas seems to be a lot more of a Rockwell fanboy than Alice Walton/Crystal Bridges. The Lucas Museum website lists 13 Rockwell paintings. The most notable is Gossip, an example of Rockwell the dad-humor illustrator. 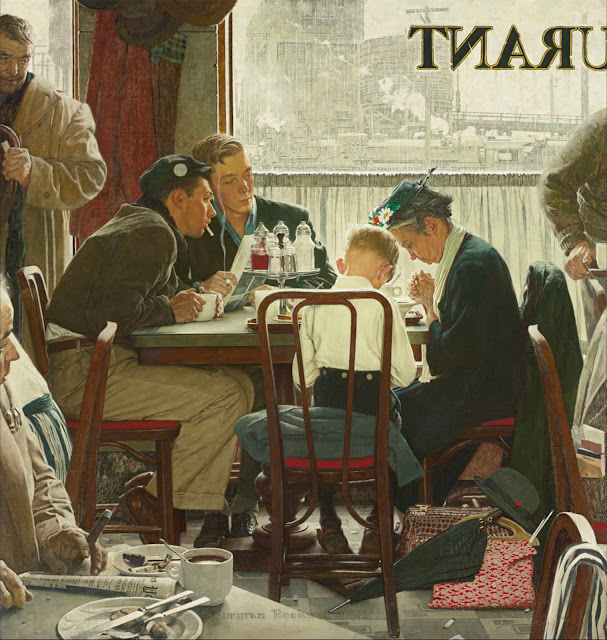 It's been reported that Lucas paid the record $46 million for Saying Grace (1951), which however is not on the museum website. It's a American genre scene with the weird cropping that might be Rockwell's most interesting feature. Still, the smaltzy subject probably won't expand the tent of Rockwell true believers.

The New York Times said that Shuffleton’s Barbershop "had an estimated price at auction of $20 million to $30 million, though it is unclear whether the museum that is planning to buy it has agreed to spend that much." Well, if Lucas paid $46 million for Saying Grace, I can't imagine why he wouldn't pay a comparable sum at least for Shuffleton's Barbershop. Rockwell's children—the ones who are suing—say it's his best work.

Reports say that the would-be new owner of Shuffleton's has agreed to lend it to the Norman Rockwell Museum (Stockbridge, Mass.) for up to two years, and then possibly to other Massachusetts museums, before taking possession of it.

The Lucas is slated to open c. 2021, three years from now. Until then the Lucas has no place to show its collection. It would be an easy bargaining chip to agree to a loan agreement benefitting Massachusetts audiences for two years plus extensions.

Crystal Bridges is already open and might reasonably prefer to take possession of a big-ticket purchase ASAP. Note that Crystal Bridges is free and has about 500,000 visitors annually. That's about four times the attendance of the Norman Rockwell Museum (which charges $20 admission). There's not much of a public-access case for the loan arrangement, if Crystal Bridges is the buyer.

Admittedly Massachusetts' attorney general has reason to favor local audiences. But if so, why permit the deaccession in the first place? 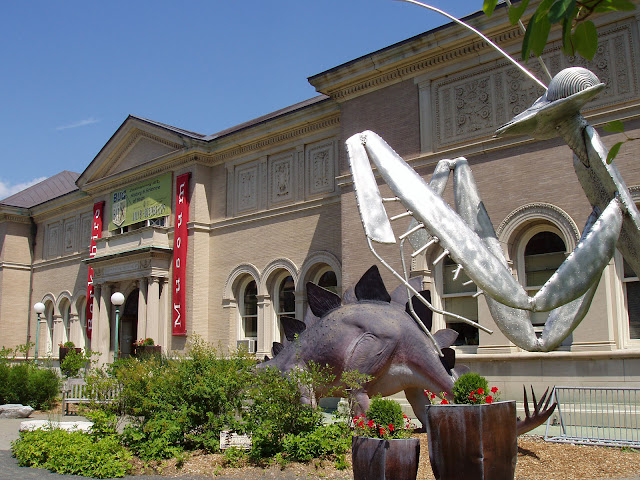 Anonymous said…
Can the Lucas Museum please purchase other paintings besides Norman Rockwell? How many does one museum need?!
February 14, 2018 at 8:05 AM