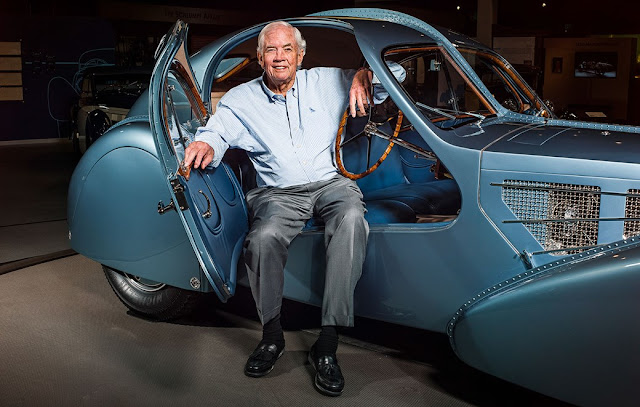 Actor Patrick Stewart is objecting to Peter Mullin's plan to build a classic car museum in Chipping Norton, England, near Stewart's home. This has resulted in Star Trek-punning leads, even in London's Times. The L.A. angle is that Peter Mullin (shown), a collector of Bugattis and Hispano-Suizas, is (a) Chairman of the Petersen Automotive Museum and (b) founder of the Mullin Automotive Museum, in Oxnard. It sounds like Mullin is contemplating moving his collection, now displayed in Oxnard and often on loan to the Petersen, to England. The U.K. project is described as a "world class classic and collector car museum" displaying "more than 200 pre-war and European classic cars."

Isn't it conflict of interest for a museum chairman to be running his own private museum (much less two) on the side? It sure seems that way. But this is becoming the rule rather than the exception. Maurice Mariciano is Co-Chair of MOCA, and co-founder of the Marciano. Eli Broad was long the most powerful board member of both MOCA and LACMA, plus founder of the Broad and the MSU Broad Art Museum in Michigan.
Email Post
Labels: Mullin Automotive Museum Patrick Stewart Peter Mullin Petersen Automotive Museum